I used to ride on the trail that you can access from 2nd avenue in hazelwood, which took you right to the hot metal bridge. Then it was closed for a few years. Can someone tell me if this is back up? Thanks.

Yeah it opened a few months ago you can ride all the way through the LTV site and there are some cool riverfront overlooks if you ride across the open area. I spoke to a surveyor and he said the trail will be open during construction at LTV of all phases

Oh, if it’s open again, that’s a game-changer for me. New exercise routine, at least for the exactly one more week I am here before extended travel! 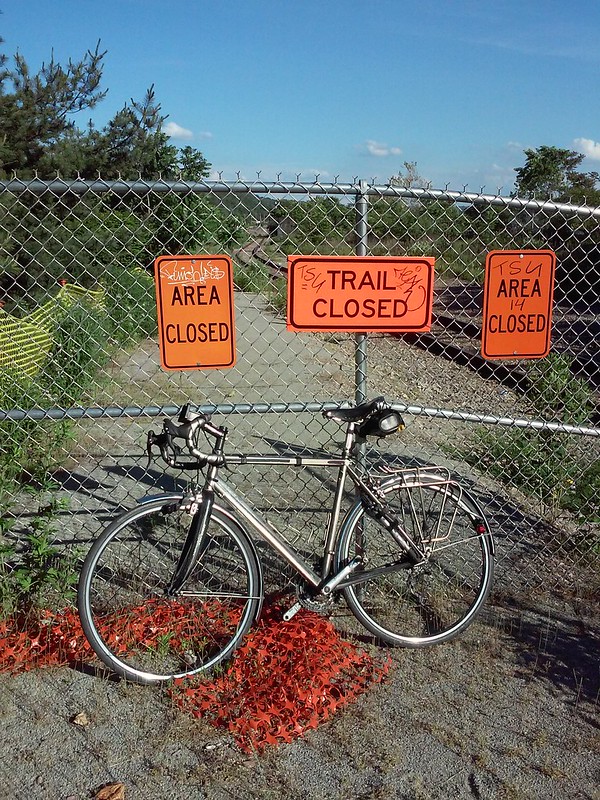 I was just there, and got basically that same picture. It’s not open. I biked on Irvine Street to get around it. Bleh

My picture was taken Monday.
I think PIT2MAD was pulling your legs. IME construction workers are not known for working Memorial Day.

Was it open during the winter at all?

No, it was not. I work very close to it. And my work place have a pretty large group of coworkers who were preparing for Pittsburgh Marathon. They knew from me that there used to be a rail. They tried it multiple time just to be stopped by someone and turned back.

For a little discussion at the Squirrel Hill Urban Coalition bike/ped meeting yesterday, I made up a map of existing, planned, and proposed bike/ped trails and lanes in and near Hazelwood. You can look at this picture (click to uncrop), or if you want to zoom closer, go to https://goo.gl/aGdqlX and click on each route for a bit of discussion.
Comments are welcome!
We should move forward on planning for the connections south of ALMONO, between Hazelwood Ave, the Duck Hollow Trail, and the Glenwood Bridge. We need to connect things up!
Does anyone have a good contact at CSX or Allegheny Valley Railroad? 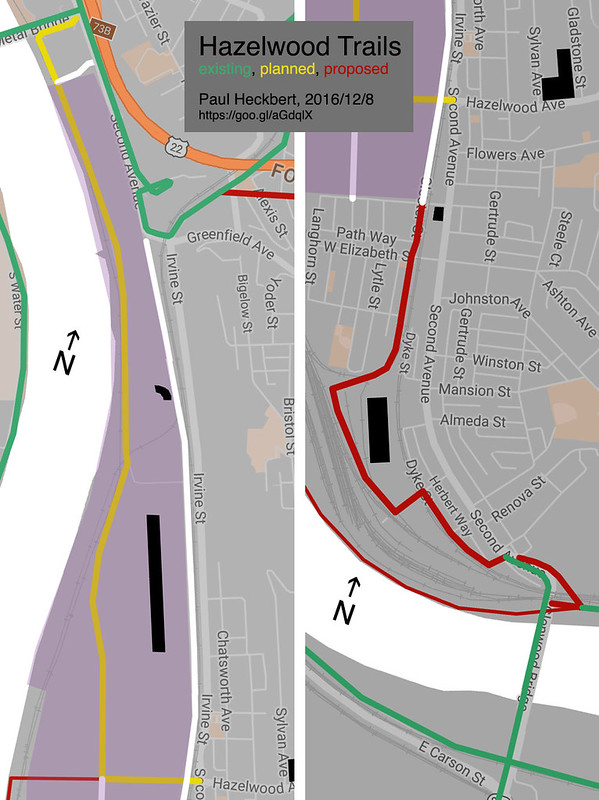 Regarding the question: How to bike across the Glenwood Bridge to get from Second Ave in Hazelwood to the GAP trail near Sandcastle?

Some road riders bike in the car lanes, but then you’re forced to deal with the busy intersections on Glass Run Rd.

I usually bike on one of the sidewalks, and as of a month or two ago, the stairs at the south end of the bridge connecting to Baldwin Rd are open again (post-837-construction).

Or, you can load your bike up on PAT’s “56 Lincoln Place” bus and, for the low, low price of $2.50, ride across the bridge in unparalleled comfort and luxury! No, I never got around to doing this; I take the sidewalks. But, hey, it’s an option.

Also: in checking this out on the PAT map I discovered that they mark bike trails! Awesome.

Hi All, I went to waffles incaffinated for breakfast today and as I was driving back over the hot metal bridge, I glimpsed the sign that says something to the effect of “hazelwood trail closed temporarily…..blah blah blah”

this temporarily has turned into a few years. Do we have any updates on this trail? I really miss it, as crude as it was, it was perfect from 2nd Ave in hazelwood to hot metal bridge.

The “Signature Blvd” in the Almono site is only half finished, but I’ve biked it a few times. A bit of bike carrying or walking is involved to skirt a few obstacles, but the rest is bikeable. The construction crews use that road some, and I suppose they might shoo you away.

Does anyone have a good contact at CSX or Allegheny Valley Railroad?

I’d suggest contacting Lawrenceville Corp (http://lvpgh.com/), Lawrenceville United (http://www.lunited.org/), and/or the city’s planner for Lawrenceville & the Strip about their experience with AVRR and trying to build trails on/near AVRR tracks…

Its been closed for almost 4 years! When is the Hazelwood trail going to re-open?

I bet it’s not going to reopen in the same way that it was imagined originally, though the almono site will have a grand boulevard with buffered bike lanes which will likely connect to the hot metal bridge via a short, existing trail segment.  Curious as to whether there will still be a trail segment near the river in addition to that.

It does look like the boulevard is well underway, but not sure when it will open to the public (just as the strip district’s new road parallel to smallman @ the buncher site is complete, but not open for access).

Does anyone know if this grand boulevard is going to be complete far before there is any other development is complete? Could be buffered bike lines on the side of a drag strip for a little while. (Though that beats trying to share the drag strip (Irvine))

@andyc:  You mean narrow Irvine St. to one lane each way and put a cycle track Ala Penn Ave. in place of the Right most lane and sharrow the leftmost northbound traffic lane?

Also, 3 rivers bike racks will do great in the 2nd Ave. business district near the Library and the pizza shop.

Here is me biking the chute to get to Irvine St. from the jail trail. There are some close cals later in the video as well.

Pretty good example of what riding is like along Irvine. Myself, I’d take the lane, without apology. Clearly, some people gave you lots of space. The scariest one for me was the thread-the-needle pass between you and a bus. But trying to stay scrape-the-guardrail close to the edge is an invitation to close passes.

Can you experiment with your mount to reduce the camera chatter? The sound of all that rattling is distracting.

Yes that 2nd avenue outbound is not fun. i really miss my hazelwood trail. Sad face. Cry. Ok I’m over it. Go pens.

@stu Some of my videos are don’t have so much noise. Also, just after this was taken, I got my wheels trued and shifters/chain lubricated. I was running against the side because I have not really biked this before and was scared.

I may be an outlier, but I don’t mind Irvine at all. No lights, no cross traffic or driveways, decent sight lines. And the only sketchy bit — the southbound pinch point at the Hazelwood intersection — is pretty obvious and an easy place to claim the lane, since traffic tends to slow there anyways. OTOH it’s a great candidate to drop to one lane away from the major intersections and introduce a bike lane.

Getting ambient traffic speeds down to twice the speed limit, probably also worth pursuing. Remember a year ago when a driver of a loaded school bus was clocked along there at 57 mph?

this is a little bit off topic, but is it ever safe to climb Greenfield Ave. to get to Squirrel Hill from the jail trail? I remember the news report about an SUV landing on the roof of the Giant Eagle near Windsor St. In order to obtain the momentum required, that car must have been moving pretty fast around a curve and the centrifugal force caused to go airborne for long enough to land on the roof of that building.

I climb greenfield all the time in the summer but if you want a much less trafficked route, head up greenfield and make the first right on sylvan near the car wash. Sylvan takes you all the way up and eventually connects with hazelwood Ave in squirrel hill. Or you could just take hazelwood Ave all the way from 2nd.

Sylvan Is a challenging climb but fun and not a lot of traffic at all save the residents on that street. Plus water at the park on the way up! Oh and turn around at the top of the hill for a great view.

I definitely use Greenfield and don’t have problem with it. I stay to the right most of the way up (where it’s pretty wide) and take the lane after Haldane or so, where it narrows.
The car that ended up on the roof was coming down a side street, I think.

Peel off before the park to the end of Forrester for another good view back to downtown.

I’ll Have to try some of these tomorrow. You can get a great view from Chatsworth Ave. as well.

Greenfield ave may get friendlier after the greenfield bridge is reopened and people driving have alternate routes, potentially reducing traffic.

Honestly I haven’t seen that much difference climbing Greenfield Ave since the bridge closed. I ride it on weekends though, maybe it’s different on work days.
The biggest problem is there is no safe way to get from Greenfield to Squirrel Hill (without climbing a hill) now that the bridge is closed. Crossing the exit ramp from the Parkway to get to Forward is an exercise in timing, skedaddling and prayer, even for this atheist.

You can take Murray Ave. from Greenfield to Squirrel Hill. Does anyone know when the Greenfield Bridge will be finished?

As of a year ago, it was supposed to reopen in September 2017. This page with some info on recent progress says Fall 2017.

I was at the corner of 2nd and Irvine yesterday and there is still a fence up, but I saw paved roads and bike lanes! I didn’t snap a photo but I should’ve.

When will the fence be taken down?