Allegheny County is finally moving forward on a project that trail advocates have been calling for for decades: refurbishment of the Rankin Hot Metal Bridge. If you bike southeast on the GAP trail from the Pump House in Munhall, this is the first bridge on your left after the big blue Marcegaglia building, but before the Rankin (car) Bridge. The Rankin Hot Metal Bridge is currently abandoned. It was sold by Rivers of Steel (the preservation group that also owns Carrie Furnace) to the County several years ago on the condition that it support cyclist and pedestrians, at least.

When the Carrie Furnace trail is built, connecting Duck Hollow to Rankin, and this bridge opens, it will finally be easy to bike between Frick Park and the GAP trail. The current routes from Frick Park to the GAP are typically long, slow, and dangerous. 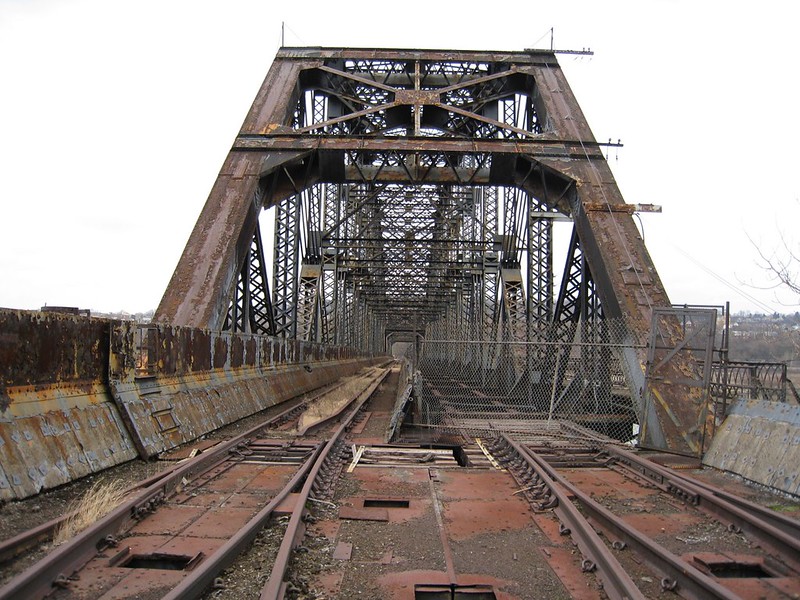 On Google maps it looks like on the gap side the bridge splits into a Y and both ends of the Y end up about 20 feet from the current trail. Nice!

What’s currently and what will be on the rankin side of the bridge?  Right now it just empties out into what looks like a big field. I see a short path but can’t tell if it is anything official or just frequent riding creating a path. 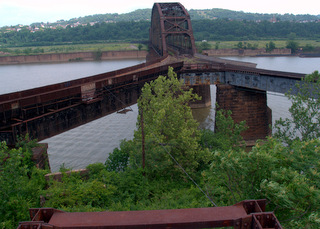 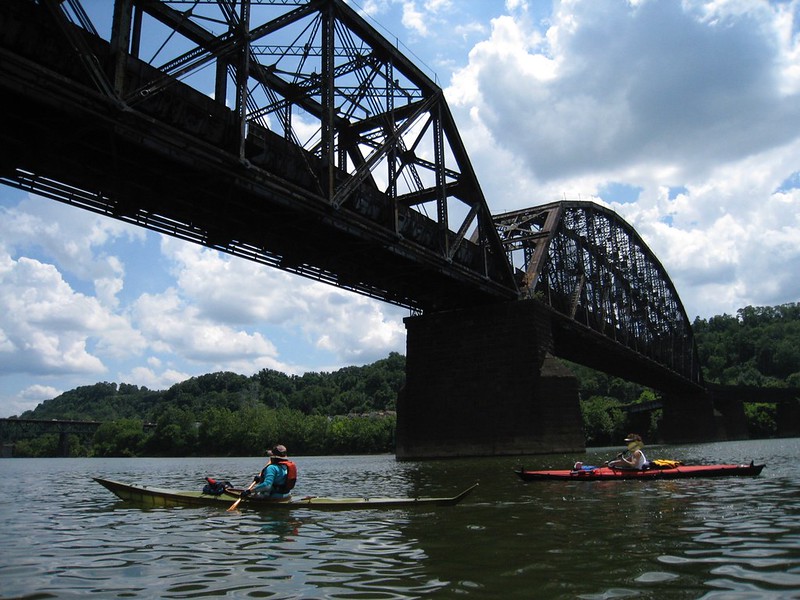 Rankin end of Rankin Bridge used to look like this: 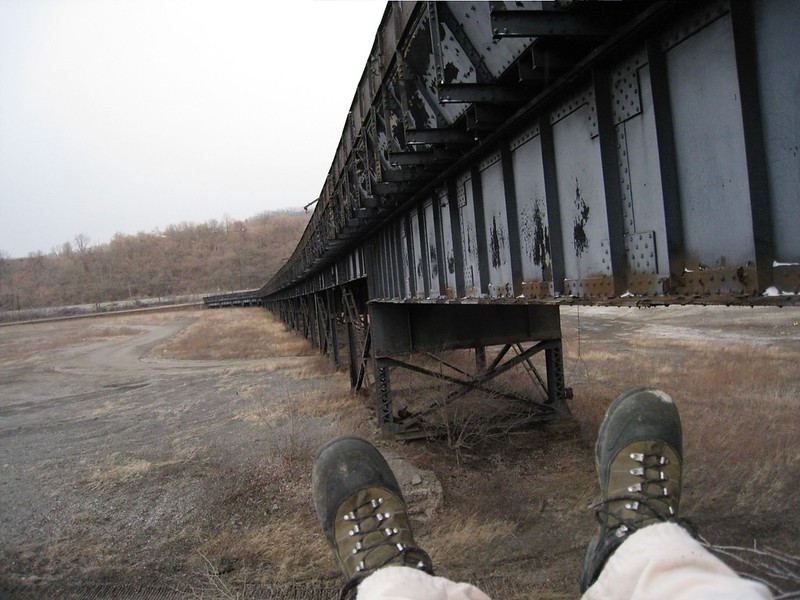 Now it looks like this (bridge deck dangling 20 feet in the air): 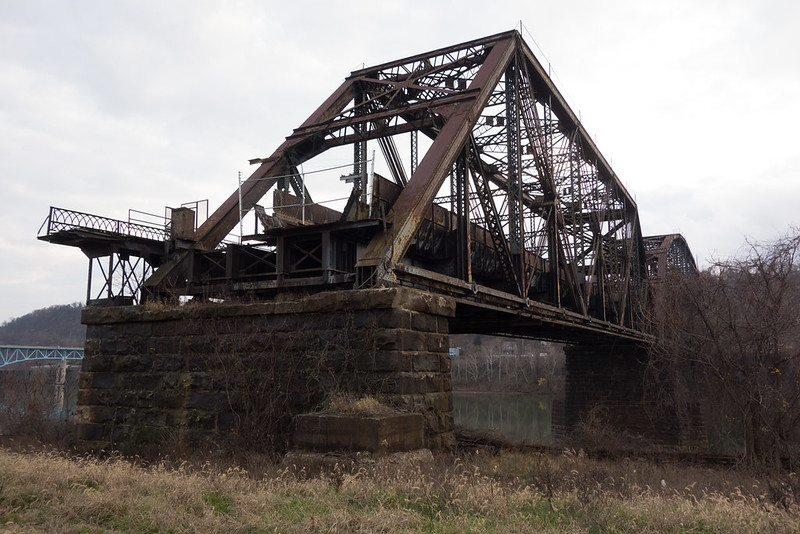 Per the article I guess they want it to be mixed use and connect to 837 and another exit for the waterfront. Do they envision it carrying the same amount of traffic as the rankin bridge?   Seems redundant to have 2 bridges close to each other connecting 837 to the other side. Unless they envision the rankin bridge for through traffic and the rankin HMB being for traffic from 837 and the waterfront to whatever development happens next to Carrie Furnace.

History of Rankin Hot Metal Bridge, part 1/3. (It’s a serial!)
When settlers migrated west from Maryland through Pittsburgh in the 1700s, on Braddock’s Road, the popular route passed through what is now Braddock, then Rankin, through Duck Hollow, up Old Brown’s Hill Rd to Saline St.
A streetcar used to run from McKeesport through Braddock to Duck Hollow, Hazelwood, and Oakland, but those tracks are now torn up or buried.
100 years ago Carrie Furnace was going strong, making pig iron. Molten iron was transported in ladle cars from the furnace, in Swissvale and Rankin, on the right side of the Monongahela River, across the Rankin Hot Metal Bridge into Munhall and Homestead on the left side of the river (near current blue Marcegaglia building). At Homestead Works, at one time the world’s largest steel plant, the iron was made into steel and rolled.
Carrie Furnace has been idle since 1978. Scrappers and graffiti artists have stolen or tagged parts of the structure. Rivers of Steel organization fenced off the area and unfortunately opposed trail development nearby for a long time because they feared it would attract more scrappers. The Rankin Hot Metal Bridge got fenced off so it was no longer walkable. The furnaces were closed except for tours.

History of Rankin Hot Metal Bridge, part 2/3.
Around 2001, Mayor Murphy built Duck Hollow Trail, but it extended only downstream of Duck Hollow, not upstream. A CSX service road parallel to the CSX railroad line, from Duck Hollow, has for many decades allowed a hardy cyclist to pedal from Duck Hollow to Rankin, but it can be muddy. The area has been largely abandoned wild for decades, popular with dirt bikers and dumpers of demolition debris and car tires.

In the early years of the Steel Valley Trail Council, a 1996 proposal routed the SVT over the Glenwood Bridge, through Duck Hollow, and back across the Mon on the Rankin Hot Metal Bridge. But after Homestead Works was rebuilt into the Waterfront, and the Waterfront Trail was put in, the preferred route for the Great Allegheny Passage (SVT’s umbrella trail name) shifted to the left (south) bank, past Sandcastle. The fight and negotiations for the trail past Sandcastle dominated trail efforts along the Mon.

Around 2008, Tom Baxter and Friends of the Riverfront (FOR) mapped out a possible route to create a Carrie Furnace Trail connecting Duck Hollow to Rankin and its Hot Metal Bridge, but the plans sat on the shelf, lower priority than the GAP trail near Sandcastle. After the connection near Sandcastle was made in 2013, FOR turned most of its trail development attention to the Erie-to-Pittsburgh trail along the Allegheny River, and Glenwood and Rankin Hot Metal Bridges were largely neglected.

The Mon Fayette Expressway extension to Oakland had proposed to cut through Rankin, Swissvale, Duck Hollow, and Hazelwood, creating great uncertainty about the future that hung over those communities for decades, but that MFE extension was finally scrapped in the early 2010s, allowing other plans to move forward, and saving billions of dollars.

Just curious if anyone might know approximately when the construction of the Rankin Hot Metal bridge will be complete.I asked others, who have given me answers from as soon as a year to as long as a decade or  even longer??Does anyone know??

Based on how long other projects take, I’d guess 2-5 years, unless the economy collapses.

Is there a part 3/3? Like waiting for the third shoe to drop.

A CSX service road parallel to the CSX railroad line, from Duck Hollow, has for many decades allowed a hardy cyclist to pedal from Duck Hollow to Rankin, but it can be muddy.

I’m decidedly a non-hardy cyclist and I can vouch that the Duck Hollow–Rankin passage is not that big a deal (except for a couple of puddles you’d want to skirt). There’s even a remarkably well-preserved brick street once you’re out of the brush. The muddy stuff is probably all firmed up just now, perfect for that holiday ride!

Rivers of Steel, which owns Carrie Furnace, hoped to convince the National Park Service to create “Homestead Works National Park”. That effort has not yet been and may never be successful, but they did win a designation of “Rivers of Steel National Heritage Area”.

Rivers of Steel sold the Rankin Hot Metal Bridge to Allegheny County on the condition that when it is refurbished, it be open to bicycle and pedestrian use, at least. Probably cars and trucks also, because the county would like two access paths for cars to the redeveloped property near Carrie Furnace.

In 2008-2010, Allegheny County rehabilitated Rankin Bridge, adding bike lanes, but didn’t connect them to anything.

In 2014 & 2015, Allegheny County dismantled the ramp at the Rankin end of the hot metal bridge and built a new bridge over the RR tracks connecting Kenmawr Ave to Carrie Furnace. They call it Carrie Furnace Blvd. The wide sidewalk appears to be designed to serve as a bike trail. The primary purpose of the road is access to the site to help attract developers (previous access required level crossing of a busy rail line). A ribbon cutting ceremony was held but then the barricades were put back up. Landscaping was done to fill in pits and make the land more attractive for developers.

When you visit Carrie Furnace for a tour you are explicitly told to “go around the barracades.”

David Conrad shot video of biking across the Hot Metal Bridge on one of his “Rough Diamond Trail” videos: