to all…..just a heads head up that next sunday is also the EQT 10 miler and as fate would have it, the run starts at 0800 also. i’ve attached a link to the course map and it doesn’t appear that it will interfere with the scheduled ride (the last 6 hills), but there will be road closures and that might affect folks driving in. expect that all the roads will be closed by 0700.

I like to publicly announce what a total freakin’ moron I am in not realizing that Russel is “manisker.” That is all. :(

See you all on Sunday! Booosh!

Next week we do as many hills as you want. I will do all of them unless I have some sort of issue. Jim will be attending the memorial ride, so i need someone who is familiar with the route to help me sweep. Or lead. Or whatever. I just need help making sure no one gets dropped.

Wish I could I’ll be in Finland…

Hey Stef … I’ll be there next week and would be glad to help any way I can. Just let me know. – Russ

neil………have some reindeer sausage for me. any cycling adventures while you’re there?

Hey Will! You were missed yesterday–hope your wife did well on the 10-miler and that you successfully fulfilled your domestique duties. ;)

If Neil is going to have reindeer sausage in Finland, I say he brings some back for all of us. We need PROTEIN! :)

PS Neil, safe travels to you and yours. Since we won’t see you at next week’s practice ride, all the best to you on the day of the DD!!

hey lori……i’m sorry that i missed all the action too! i was a darn good domestique though and the ladies appreciated it. i’m anxious for next weeks big adventure. see you then.

Trying to bring that back usually involves a nice doggie showing up at the airport and sitting down next to me. Not good.

I’ll try to stay in shape this week!

Tips for canton: ride up as far right as you can go. If you go left and start to weave you will fall down hard.

Also during the real DD if you do fall… GET UP fast and move to the left side, do not just lay there like you broke your leg or arm.
If you also have no idea how to climb, please do not ride in the front and ruin it for those going for points… That just makes it a cluster and dangerous for EVERYONE.

hey hikeabike……some good tips, but if you haven’t visited Canton in a while you may not be aware that the road has been repaired and there is no need to track on the that narrow strip on the right hand side anymore. they did a nice job getting the cobbles all sorted out and it’s a much improved surface now.

Hey, Kris. I know but still the right hand side is the trusted path to making it, those cobbles have been blessed for years there. :D

there you go….and besides being the sacred way, if you do start to fall there’s more chance of getting an outstreched hand from a fan to keep you from a big tumble.

This Sunday is slated to be the last practice ride. Is there any interest in having an additional practice ride the following weekend on the 22nd or 23rd? Just curious as to why the last one is two weeks out from the race. Is that customary?

Just a guess, but I imagine the schedule was setup this way to allow folks some extra flexibility heading into the holiday week.

I’m not opposed to doing some sort of ride that weekend … pretty sure there would also be some interest amongst the group to put a ride together. Either day would be fine with me … any thoughts?

How long of a ride are you guys thinking?

I am certainly interested in riding next weekend — Helsinki is pretty flat, and I don’t have a bike here anyway. Given my lack of exercise this week, I will be keen to put in a lot of climbing next weekend. Either the whole route or all but Canton and Boustead, as getting down there without a lot of people is just not very pleasant riding. Good luck tomorrow!

I like the idea of all the hills except Canton & Boustead. Weather is questionable for next weekend, so maybe wait a bit before deciding on which day to ride? My preference would be Saturday, since 6 days of recovery is better than 5, but again, see what the weather looks like first.

“I like the idea of all the hills except Canton & Boustead.”

That could also be some sort of existential statement.

Let’s wait on the weather; I am officially a meteorologist, so I’ll try to keep tabs of the forecast. The other thing we could do if it is an unofficial official scouting ride is meet in Aspinwall so we could forgo the miserable ride up from the Point…

How was the ride??

hey neil…..boy it must be pretty late over there. how many hours of daylight where you are…what’s your latitude?
anyways, about 20 folks with a couple newbies. everything went well and there was much success all around at Canton. i cut out after hill 10 as i had some things to do at home, but quite a few went on to do all 13. twas a cold one too. it was cloudy and it just never warmed up.

I was and am back in Pittsburgh. As a PhD meteorologist I predict rain possibly mixed with snow for at least the next few hours…

(rule #1 of broadcast meteorology — LOOK OUT THE WINDOW! Or, in my case this morning, listen to the roof and notice that the cats don’t want to go out)

ps — Helsinki is 60N, so it is pretty dark this time of year, but the weather in Nov is pretty familiar to a Pittsburgher. We went up to Pallas last year. That’s 67.5N, but it was in Sep. Beautiful Aurora Borealis though.

Hi Neil! Good to hear from you–I really missed your sense of humor yesterday (but there were plenty of laughs to be had, probably at my expense as usual lol).

OK everyone, here are the two pics from yesterday! The group held up remarkably well after conquering the 13 punishing hills! The first pic is the one I took of everyone, and the second one is the one Phil (Philly!) took. Don’t we look so fresh? Mike and Will would have been there too, had it not been for family obligations and a few flat tires (damn construction!).

Anyhow, everyone did a fantastic job and boy, it was the support of everyone I think that was most impressive. I know I wouldn’t have made it up those hills without the encouragement and cheering of you guys.

I won’t be able to do any more rides. So I greatly look forward to see you on the big DDAY! REST UP!

And thanks again for Steph and Russell managing yesterday’s ride for all of us. And of course, a HUGE thank you to Jim and Steph for donating their time to do these training rides with us!!
I have to admit I’m really going to miss riding with you all. Unil next year’s training rides then! Cheers my friends!!! 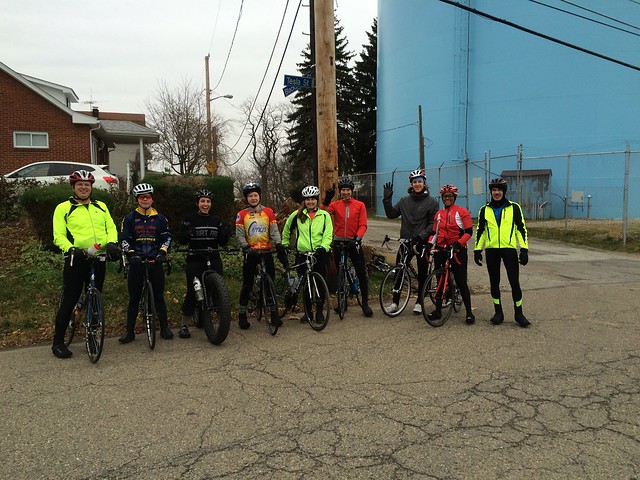 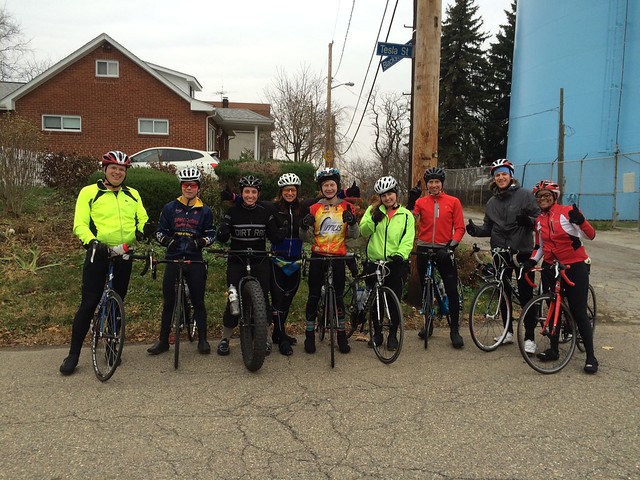 I’ve just posted this years DD shirts for sale on my site. They will be available for pre-order until the day before the race and for sale the day of the DD.

Check out the details at Peppernamecard.com

Your designs are always awesome.

Hey everybody … Saturday is shaping up to be a pretty solid day weather-wise if you guys want to meet up for a ride. 45 degrees sounds pretty damn good to me right about now!! I was thinking we could do most of the DD route … maybe cutting-out Berryhill, Canton, and Boustead?? This would dramatically shorten the overall route and we’d still get to do all the hard hills.

What do you guys think?? Any suggestions are more than welcome.

That sounds good to me. It might still be quite cold in the morning though. Any interest in starting the ride a little later (10-11?)? Meeting in Aspinwall, as Neil suggested, would be fine with me.

I can’t start too late as I have some things to do later in the day. Some practice with thermal management might not be a bad idea as current projections have the 29th on the cold side (below freezing but just high 20s). Maybe 9am?

The forecast for the 28th/29th right now looks sort of grim, but forecast skill 10 days out is not super. From the look of things the temperature projections are probably pretty sound, so it looks like cold but not bone chilling. The prospects for snow on Friday the 28th are worrisome. The snow would not be associated with a frontal passage so much as general uplift, so my sense is that both the timing and quantity (if any) are probably going to bounce around.

I would also prefer to not start too late … I think a 9 am start is a pretty good compromise.

Okay … Let’s meet at the Golden Triangle Bike Rental (as usual) and be ready to roll at 9 am this Saturday (NOT Sunday).

Neil, if you’d prefer to meet us at Center Ave in Aspinwall … that’s fine we’ll just see at 9:30.

That work for everyone?

As always, feel free to invite anyone interested, just be ready to go by 9 downtown or by 9:30 in Aspinwall.

That works fine for me. I will also meet at Aspinwall at 9:30.

I have a race on Saturday so I can’t join you. Have fun! I may tell a friend, roger, about it, if that is ok. He is a tall fast skinny dude that was looking to do some hills.

Stef, of course Roger can join! Tell him to come with us … the more the merrier!!

Would that be Rodge Dodger? (sorry)

OK so 9:30 in Aspinwall for the Aspinwall crew. Where should we meet? Just gather at the stop sign on center a couple of blocks before the underpass?

Roger Doger is part of a story of my father’s from WWII. He was in the signal corps. They were developing instrument landing systems, and they were doing a demo for some general. The pilot would not land. Finally the Major in change of the demonstration grabbed the microphone and shouted “This is MAJOR Jones I ORDER you to land”. After a few seconds the response on the radio was “Roger dodger you old codger I’m a Major too”. Discipline in his unit was a little unusual.