I’ll be tacking the train out from Chicago again. Hopefully eastbound will treat me better- I left 7 hours late last year and experienced nearly every variety of bad weather.

I don’t expect to do sub-30, but I would like to ride through the night and arrive while it’s still Saturday.

If anyone has a companion/ride home driving from Pittsburgh, could you help a guy out by schlepping a travel bag?

I’m in. First time and hoping for 40 Hrs but will be happy with a finish.

I have the same goal as I have every year, and that is to finish. I don’t need to hurt myself or have a totally miserable time. This is just a 600k to me.

I was pretty sure I was out for this year anyway, but breaking the seat frame on my distance ‘bent during a 200K today clinched the deal.

may I ask, when do most of you expect to be at the Pike2Bike tunnel?

Abandoned turnpike tunnels? Hoping by dark, but it depends on how much the limestone at the beginning slows me down.

Are you planning on being there, V? It can be startling if it is dark and someone off in the shadows is hanging around in the tunnels.

Punchcard – I plan on shooting for a similar time goal and plan on riding through the night and would love company. I did ~200 miles yesterday from Philly to York and back and averaged 16.7 on the way out with a tail wind and 14.8 back with a head wind. I took two short Turkey Hill breaks to refill on liquids, add some variety and spontaneity in my food intake and reapply sunblock at the 1/3 and 2/3 point in Lancaster.

For those who have ridden both the GAP trail (I have not ridden west of the Abandoned Turnpike section in PA) and either the Schuylkill River Trail north of Phoenixville or the Perkiomen Trail near Valley Forge, are they similar in surface conditions and speed? Those are both pretty hard packed and don’t slow me down too much, but if it’s loose, large gravel, I could see that making a considerable speed and time impact, especially for a relatively long section of the CtC route.

The GAP is crushed limestone. I ride it on 700×25 all the time without much problem. When it rains the surface gets softer. I’ve found that it dries pretty fast though after a rain.

The only time the surface has truly “sucked” — was the time when they were re-surfacing a long stretch of trail from Connellsville to Ohiopyle. It was like riding on wet concrete for 20 miles. They were literally laying it down and rolling it that day. That section is quite nice now that it has been hard-packed over time.

I have slicks on right now, and I haven’t found any tires at a bike shop yet that make me want to do a swap.

If you can deal with the absolute mind-numbing and tire-lever snapping tightness of the Continental Tour-Ride tires, they have a nice tread to keep your rear wheel from slipping on the dirt and are quite puncture resistant. I rode to DC twice, and once to Cumberland and back on the same set of tires, (along with general commuting), before I ever had a puncture on them. And the front tire is still in fine condition from that set.

I can’t find them other than online sources and I don’t have time now to wait being this close to the “launch date.”

Saturday I jumped on the GAP at Confluence and biked through Rockwood. The trail is a bit soft but manageable, I expect it to be softer due to rain Sunday night – it’s supposed to rain this evening as well. I’m no speedster. I managed about 11 – 13 mph on the trail. Once I hit the road in Rockwood, mph ranged 14 – 16+. There are a lot of broken limbs sticks and such. There is a down tree about 5 miles from Rockwood. It looked like there was a marker to have it removed by trail workers. Stay to the right on the Pinkerton bypass. I saw a small hole on the left. Be careful exiting the bypass to the bridge and just after the bridge. It’s just plain wet.

That report makes me want to look a little harder for some tires with tread this week!

LOL. Every weather app has been giving me completely different predictions every day for the last month. And somehow all of them tend to be wrong!

I just tell people to be prepared for the worst, especially for this thing. I don’t think I’ve ever covered 400 miles on a bike without getting rained on. Even on my nicest long distance rides there would be some random freak rainfall for half an hour at some point.

April is volatile and you never really know what the weather will be until the day arrives.

Thanks for the trail update. Seems like my tires should be just fine and it shouldn’t be too big of a hit to the average speed, especially so early on when we’re all fresh.

Looking at the map of Point State Park, it looks sizable. Where in the park will we be meeting? The FAQ mentions under the highway underpass, but that appeared to be a joking reference to the miserable and rainy conditions that the CtC appears to be ridden in on frequent occasion.

I’m not sure what my breakfast plans are at the moment, but are there any awesome places that I should try nearby that would be open at 4AM? I love trying out bakeries/donut shops, but a 24 hour diner would be a solid choice as well to prefuel.

I believe we are to meet at the fountain. The park was under repair and there was no access to the fountain the last time and that is why the meeting place was under the bridge.

The only diner I can possibly think of that would be open that early — and it’s a bit of a haul from downtown — would be (C)Ritter’s on Baum Blvd. From downtown you can take Liberty all the way out there, make a right on Baum, and it’s right there. It’s about 5 miles each way from Point Park.

I don’t even think fast food joints are open that early downtown.

For breakfast I just down some ensure and an energy bar.

I assume we’ll meet under the bridge if it’s raining or at the fountain otherwise but just look for the blinking lights.

If you want to join me for the 30 hours you are very welcome. I’ll mail you my race plan if you email me: paulkilroy at yahoo.

Don’t eat at ritter’s. There is a reason people around here call it Shitter’s. It is good food but not the kind of food you want to eat before ctc. There is a giant eagle express on Baum that is 24 hours. That is the closest to the start that I can think of, besides the one on Carson.. I think that is 24 hours also and has some type of mto going on.

I just spent a few minutes checking the webs and it seems that most of the breakfast joints in the downtown/strip/southside area don’t open until 6am or so.

There are two Get-Go’s (think Sheetz) in southside that are open 24hr with MTO – one at 18th street & Sarah, and one on Carson Street by the FBI building. Both are about 4 miles from Point State Park.

There is an Eat-n-Park (24hr dinner) at the waterfront in Homestead, but that is 9 miles away (but right on the GAP and you’ll pass it soon enough). If you are driving to the start this might be your best bet.

hey does anyone have an accurate gps file?
I got super confused on the trail as it approached philly. is it best to exit the trail at the museum or to ride to what looks like the end of the trail and get onto the streets at cherry street?

Dan, i think you posted one before but i don’t have it anymore.

I had no idea it has gone from “Critters” to “Shitters”

I also got lost near the end of the trail in Philly now that I recall. I actually rode straight into a big thick steel cable stretched across what I thought was the “trail” — but it had enough give that I was slowed down like I just ran into an arrestor hook on an aircraft carrier vs. thrown over the handlebars. It was at night though.

I ended up getting off and riding through the neighborhoods until I could find the bell. I got some iced coffee from a Dunkn’ Donuts with 6″ thick bulletproof glass — where they handed it to me through a slot in the window, and got chased by many pleasant people through the streets of northern Philly yelling “NICE BIKE, SLOW DOWN YO!!!!!”

Taking a cue sheet this time :-)

I’m too excited to be very productive this week at work. So my loss in productivity is your gain.

Decided I want to roll with a cue sheet this time binder clipped to my handlebars. Here’s a PDF if anyone wants. I grabbed Dan’s cue sheet, and some other graphics from people. The type is REALLY small, so hopefully my printer is high enough res to make it readable.

I’m gonna laminate some of these to fold into 4 x 6 quadrants. If anyone wants one, just holla or grab a PDF below…

Good luck all you CTC’ers.
After finally riding east to west last year I was really, really looking forward to trying it the “easy” way this year, but alas I’m a no go. I’m presently so fat, lazy and out of shape I’d surely crumple in a sad heap before ever making it off the GAP Trail.
Tailwinds and safe travels – keep the rubber side down! I’ll be thinking of you and can’t wait to read the stories.
Ron A. from Joisey

Good luck to all of the participants! 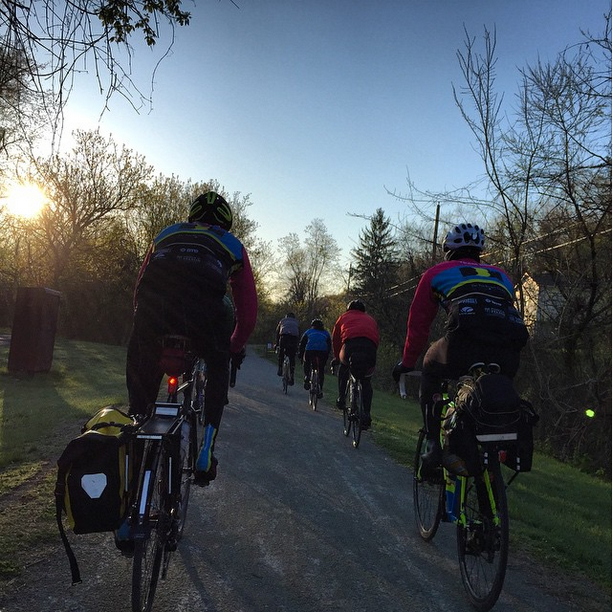 I rode with the pack for a while, dropped back to stay with a couple of cyclists bringing up the rear, and finally stopped at the river crossing at McKeesport around 6:30ish. I don’t know who else in the crowd was riding along on the send-off ride, but I didn’t see them peel off.

Looked like about 25 riders (obviously some were locals on the send-off ride). Maybe four women? Not an accurate count, but probably close. I got some dark, shaky video at the start, which I’ll post later.

Mike Smedes post says there were 45 at the start. Maybe that includes some tag-alongs.

Impressive for such a shoddily run affair.

From Twitter (@smicycle): Mike Smedes’s derailleur is wrecked. Does anybody want to pick him up from Ohiopyle?

Send-off video. I’d guess closer to 25, but have a look if you want to count.

From Twitter (@smicycle): Mike Smedes’s derailleur is wrecked. Does anybody want to pick him up from Ohiopyle?

I don’t have a tweeter account. Is he still need a ride?

I haven’t heard anything else. I’ll ask and let you know by PM if I hear anything.

Send you my cell# via PM.

Mike is back in action. https://instagram.com/p/13lOCiutq1/

I’m sure Barack is jealous. Just think, one of the things he can’t do is Crush the Commonwealth.

While 30 minutes of following blinking taillights might get a tad tedious, I sped up my front video 8x and captured the transition from complete darkness to fairly bright out.

5:40 – passing South Side Works, everything is black
5:58 – passing Waterfront, can easily see everything