was riding on southside trail just past the marina today around noon when 2 younger guys riding motorized bikes (gas engines) came speeding down the trail. I used my hand to signal them to slow down and instead the 2nd guy mocked me and sped off.

At least I was prepared for the mocking — I have teenagers.

Unrelated to the foregoing, here it is September, and I am still seeing broken pavement in various places. I am beginning to lose hope that said holes will be patched before winter, and that they will merely get deeper and larger before April rolls around.

Too many to name.

Major street closures near 10th and Penn this morning (10/28) with a bus having fallen through the street.  Bike lane is blocked on Penn from 11th through 10th, so either take riverfront trail, or carefully use sidewalks.  Businesses on Penn are still open for now.

Big hole in 10th slowly being filled in with gravel, 10th street closed between Penn and Liberty, which are both open.  Penn Bike Lane blocked near 10th street, plus intermittent truck and worker movement plus gawkers.

California Ave on the north end of Bellevue, into Avalon, badly torn up from recent utility work. One steel plate with no asphalt or other buffer, so careful for pinch flats.

It appears the bike lane east of the “sinkhole” has now become the parking area for any and all service vehicles in the area.  How can we suggest they use the opposite side of the street, which frequently is used for short term parking as well as MegaBus farther up the street.
As it is now, cyclists heading east in the bi-directional bike lane now swerve into oncoming traffic on one way Penn Avenue.
I might try some 311 requests, give it a week, then start calling 911.

Hello. I ride through there every morning and night too. It is an inconvenience, yes, but there is also a massive sinkhole downtown that needs to get fixed before the weather gets worse. Call me crazy, but calling 911 about this may be a bit extreme.

I find that just taking my time and going around it when the coast is clear works well. It is more difficult when traveling towards the strip (east), of course, but we’re lucky we have a bike lane there to begin with.

I hate cars parked in bike lanes more than anyone and I usually tell the driver just that when I come across them. But this is a bit of an extreme situation and involving 911 seems a bit over the top, I think.

Gotta agreewith pissing4chissakes … However…there’s always an however.. DLC, etc… the blockers should provide flagpersons to direct traffic as necesary… at least as a courtesy and to send a appropriate messages to the bike.pedestrian.driving community…and may be requured legally.

I saw this once before. I forget who needed to access the bike lane..and this was 3 or 4 years ago.. they were working on abuilding I think..and there were persons of a flag persuasion…what a pleasant, welcome, and thoughtful surprise. … the only thing they could have sone is offered complementary snacks or Amazon giftcards and as Liberty Avenue is around-the-corner…

I reported it to ScottB and/or EricB of B.Pgh… and the attitude was… hey, we gotta send them a thank you note!! (even though they weren’t giving out Amazon gift cards…and since they didn’t come to Pgh, who needs them anyway). Kudos to BP…

Apparent icing on the trail along the Allegheny on the downtown side, starting near the Warhol bridge. Meant to go past the bridge towards the convention center but decided to turn back, as it looked a little too slick for non-studded tires.

The trail around the Point is clear. The Ft Pitt Bridge sidewalk has snow on the downstream side, but it is passable; the ramp into PSP is clear, too.

I rode from Neville Island, and the bike lanes there are clear, save for the occasional puddle. The Fleming Park bridge bike lanes have some snow on them. These will likely not be plowed or salted all winter, due the new single lane configuration and the bollards separating the bike lane.

Late Tuesday afternoon, safe bet that every surface is icy.

Some sidewalks near Kraynick’s were icy. I slipped and fell twice as I was walking to the 87 from there at around 5:20 PM. Use caution

There’s lots of very thin ice out there, in shady areas and especially on bridges like Hot Metal and paths like Pocussett St. Roads that get car traffic are clear. I’m glad I put my snow tires on last night.

Transport St. appears to have fresh asphalt between Glenbury St. and Tariff St.

Snow on steps from Central Shelter to Overbrook

Call me crazy, but calling 911 about this may be a bit extreme.

City wants us to call 911 for any parking in any bike lane. 311 will tell you to call 911. And this is what I call every time when I see car in bike lane and driver does not want to move his/her vehicle.

…yeah, that sounds like a great use of resources.

*Police departments require even non-emergency calls to route through 911 dispatch as a means of, if nothing else, recording the report and collecting consistent information. It’s not so much a matter of “police resources” as there are 911 call centers and dispatchers that farm the requests out to the relevant departments and/or agencies.

So it’s not overkill, its just best practice at this point, and, it’s how the local PD *wants* to be contacted.

Negley Ave at Penn Ave heading to Friendship Ave is blocked right after the light with a temporary sidewalk as whatever construction happens at the old babyland building. Whole group of buildings are fenced off. I assume will be annoying in heavy commuting times, as it’s much easier to zip past on a bicycle than motor vehicle here. If there will be more trucks and/or equipment, that may take over the right hand lane of Penn Ave heading towards E Liberty neighborhood.

Eagle Lake (near the Glenwood Bridge) was icy when I was there on 12/21, but the boardwalk was helpful. Thanks to whoever put in that boardwalk a few months ago (I’m pretty sure it wasn’t Friends of the Riverfront and it wasn’t the birders). 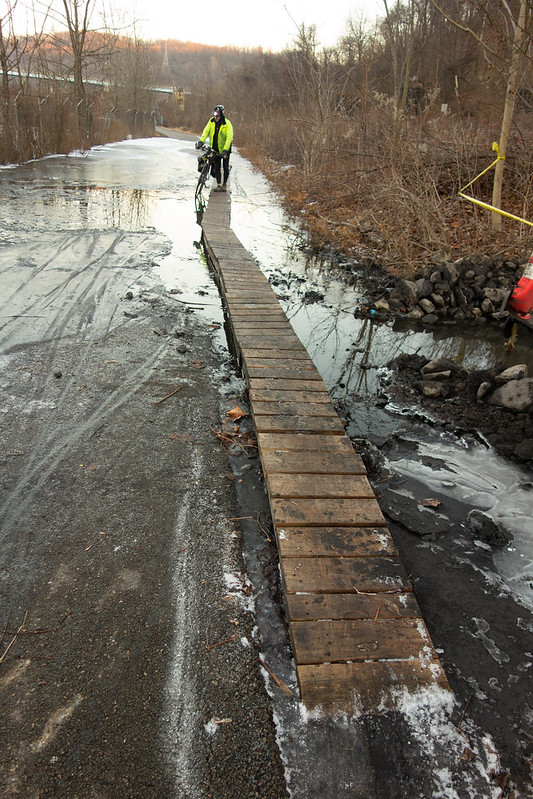 <p style=”text-align: left;”>The deep mud on the Mon Wharf was just cleared by Pgh DPW….The ramp is now clear to get to The Point…Though there is some mud along the route it’s dry and superficial.</p>

Heavy snow, obviously. At 8:30 the side streets had packed snow and difficult going. Pocussett Trail was plowed. Eliza Furnace and the Hot Metal Bridge were not.