Earlier this year, around March, I brought the parts to assemble this bike from Kraynick’s. It has become my everyday bike over the year. the frame was originally painted dark grey, but I sanded off all the paint and polished the aluminum. I put many hours of hard work into this bike and do not want the polished finish to get damaged by the salt that is put on the roads after a snow event. Here is a picture. 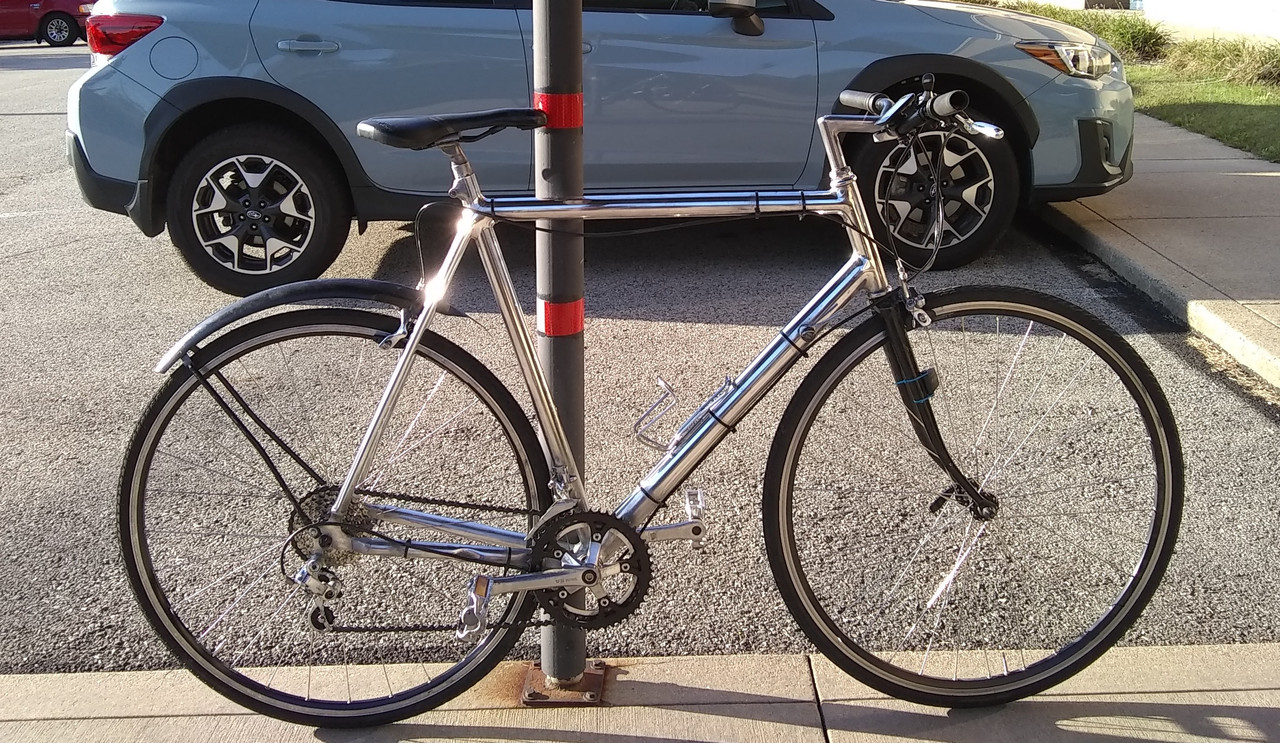 How much snow has to fall before the roads are salted? Will the brine damage the aluminum if it is removed with a wet rag within a day after it gets contaminated? Will car wax protect the aluminum from the brine. I do not want to paint it even with clear-coat and answers will be greatly appreciated. If needed, I will use my other bike, but I would like to keep using this one as long as possible.

see the advice at https://forums.roadbikereview.com/general-cycling-discussion/winter-cycling-your-aluminum-bike-vs-road-salt-195762.html

I don’t have personal experience with this, but from that discussion it sounds like clear coat or paint would be a good idea

They salted the hell out of everything this morning, when there was practically nothing. That should tell you all you need to know. Park the good bike until Easter.

How much snow has to fall before the roads are salted? APPARENTLY NONE.

Will the brine damage the aluminum if it is removed with a wet rag within a day after it gets contaminated? I THINK YOU WOULD STILL GET OXIDATION OF THE ALUMINUM, OR AT LEAST A MARRING OF THE FINISH.

Will car wax protect the aluminum from the brine? I WOULD EXPECT WAX TO BE MARGINALLY EFFECTIVE. IF YOU ARE LIMITED TO PRODUCTS FROM THE AUTO PARTS STORE, I WOULD WIPE IT DOWN WITH WD-40 ON A RAG BEFORE AND AFTER EACH RIDE.

I do not want to paint it even with clear-coat and answers will be greatly appreciated. IT ISN’T CHEAP BUT THERE IS A PRODUCT CALLED SHARKHIDE THAT THE ALUMINUM BOAT AND HAND-FABBED RACE CAR PEOPLE USE ON BARE ALUMIMUM. I’VE NEVER USED IT, BUT I’VE SEEN A LOT OF RACE CAR BUILDERS TOUTING IT AS A GOOD ALTERNATIVE TO CLEAR-COATING ALUMINUM WITH PAINT, WHICH REQUIRES A LOT OF SURFACE PREP, AND A FAIRLY SPECIFIC PROCESS ON TOP OF IT, TO ACTUALLY GET DECENT ADHESION. AS I UNDERSTANT IT, THE SHARKHIDE JUST GETS WIPED ON, AND NEEDS TO BE RE-APPLIED FROM TIME TO TIME.

Could I maybe cover it with used tubes to reduce the amount of metal exposed?

No, that would be worse. You would likely get salt, etc. stuck between the tubes and frame.

You have 4 options: 1) clear-coat it; 2) use Sharkhide; 3) ride it as-is, but be METICULOUS about washing, drying and hitting it with WD-40 or the like (in that order) after each wet ride; or 4) don’t ride it. There’s no clever, low-effort way around this problem.

For now, I won’t ride it while it is wet.

No, Z, just park the thing. Winter conditions, you need different equipment anyway. Different tires, probably pogies for the handlebars, probably a different lighting system since it’s always dark. You just need a different bike, set up to handle winter. Any cheap frame will do, something you don’t expect to get more than one or two seasons out of, but that you can swap parts onto the next one when this one rusts out. A simple case of Rule 12. Meanwhile, it can be the summer backup in case the good bike has to go in the shop, or you want to ride with someone who doesn’t have a bike.

It’s good so far. I’ll wipe it down and put it away in the basement before the next snow event. After that, I’ll have to change the front tire on my Fuji because it’s too narrow. I might even go as far as to put zip ties on the wheels to get better grip in snow and ice.

I ride all year long and salt does damage for sure.  Rode a fixed track bike for a year and it has damage on the front forks from salt.  My mountain bike was attacked by salt as well.  You can fight back with spraying grease or fluid film on everything but brakes and other obvious parts like seat and hand grips.  Salt is hard on the drivetrain.  Fenders help some.  Shame they put so much salt everywhere.