(location is at center of this

The panorama will include most of

He plans to be at that location shooting picures every second or two from 5:30am until 11pm!

If you’re in the area, you could drop by and say hi. Or if you bike along the Mon Wharf or some other location downtown visible from the top of McArdle Roadway, you’ll be in the video! Wear bright colors!

Here’s a simple time lapse of the

Please post if anyone wants to do a spontaneous bike parade downtown tomorrow. Maybe before 8am or during some kind of lunch break. Looks like in front of the Hilton, at the Point or some spots behind PNC will be visible.

If you want to appear in the time lapse, some good locations would be:

bike trail on the Southside between Station Square and Fort Pitt bridge (3/4 of the way from the former to the latter),

downstream side of the Smithfield St Bridge,

many of the open areas of Point State Park.

The time between frames is 4 seconds.

Sorry bikeygirl, I overslept and had to drive in today

Hope you went out anyway…

i wonder if he was able to capture me almost getting creamed twice by idiot stillers fans on stanwix. shitty day to be biking downtown.

I ended up having lunch plans.

It just ended up taking the jail trail at 6pm back home w/other coworkers, so maybe we’ll be seen there with all our blinking lights.

Other than that, the building I work at faces McArdle Rd and is open to view, so maybe I’ll be seen looking outside the window, haha!

Some snapshots of Randy and others doing the photography yesterday: 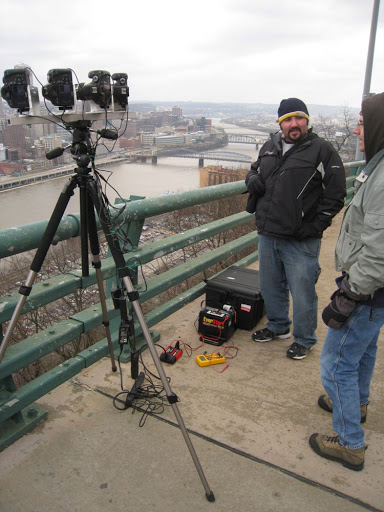 four Canon T2i’s running off a car battery, each camera had a 128 GB memory card. 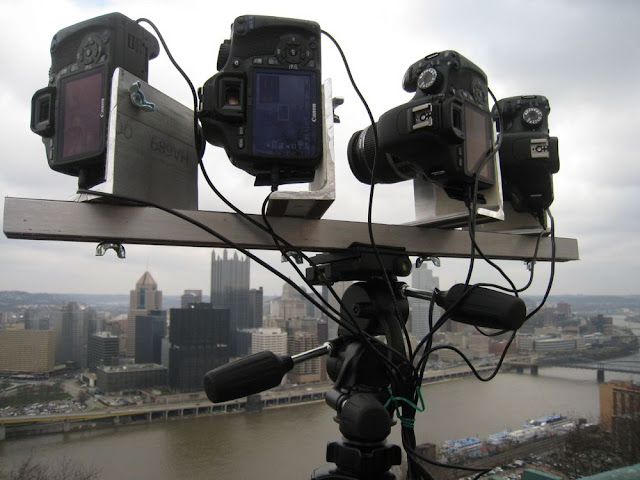 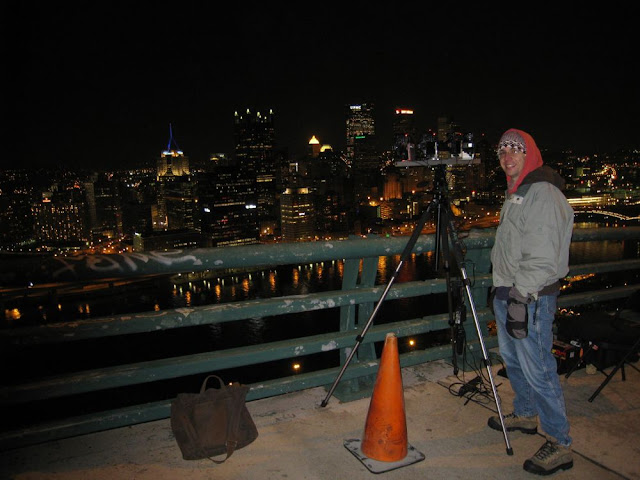 Too bad it wasn’t a bit nicer yesterday. I’m on the 20th (top) floor of the Frick Building on the Mon-facing side and can go out on the balcony if it’s nice.

The Frick Building is clearly visible in the first picture in the album directly above the cameras. I can see directly out that right-most window.

Wow! Thats neat! I never knew how a gigapan photo was taken! Thank you for sharing!

So, most definitely I won’t be seen riding down the Jail Trail, but I can definitely see my building peeking at wood street!

Do post a link of the final image once available

very cool! at first I was confused how one would do a time lapse gigapan as it takes a fair amount of time to take just one gigapanimage. I get it now, they’re using the term in a more generic sense.

Gigapan stills are made from a grid of rows and columns of overlapping pictures. The grid can be small (2 columns and 1 row) or huge (100 columns and 50 rows, say). These are shot with a motorized panohead that aims the camera and clicks the shutter, either mechanically or electronically. See http://en.wikipedia.org/wiki/Panoramic_tripod_head or http://gigapan.org/cms/shop/store .

Standard time lapse would be one column, one row, but many frames over time.

Gigapan time lapse is a time lapse wth higher spatial resolution, so that you can zoom, in addition to playing forward and backward in time.

Gigapan time lapse is usually done with a panohead that allows you to shoot one gigapan (many columns & rows) every few minutes (if it takes 2 seconds for each input image, and you’re shooting C columns and R rows, it’s going to take 2*C*R seconds per frame, minimum). The rig we used here (built by Josh Schapiro) is specialized for shooting a 4×1 grid. Triggering all four cameras simultaneously helps the stitching if you have moving objects (e.g. cars on the road) and it allows us to run this at a frame rate of one set of images every second or two. Yesterday, Randy was running the camera at one frame per 4 seconds, so that he wouldn’t overflow the 128GB memory cards in the course of the day. And the exposure times varied through the course of the day; they got up to about 2 seconds.

Thanks for the info, paul! I honestly hadn’t heard the term Gigapan outside the context of CMU’s Gigapan System until now.