We had that little snow of about an inch and of course the plows had to plow all the way to the very edge so all the accumulated debris is all over the sidewalk.  Glass, car parts and a ton of other crap.  Just a heads up.  Been meaning to mention it for a while, but keep forgetting.

I noticed all the debris while walking from my house in Aspinwall to the bus stop by the zoo to catch the 87. It was pretty terrible. Maybe, some people can get together and sweep the sidewalk. I’d be glad to help.

Has anyone cleaned this up yet?

I biked it Monday and it was bad enough that I sent this email to Julie Jakubec, the Ohara Township manager. (see http://www.ohara.pa.us/contact.asp)

The sidewalk of the Highland Park Bridge, particularly the northern half, is strewn with garbage, some of it many months or years old, some of it newer (shredded carpet, perhaps?). The sidewalk looks like something you’d find in a third-world country. (see attached pictures). My understanding is that the northern half of the bridge is in Ohara Township. Could you have the sidewalk cleaned soon, please? I bike this bridge and beyond being ugly, the trash is a hazard. 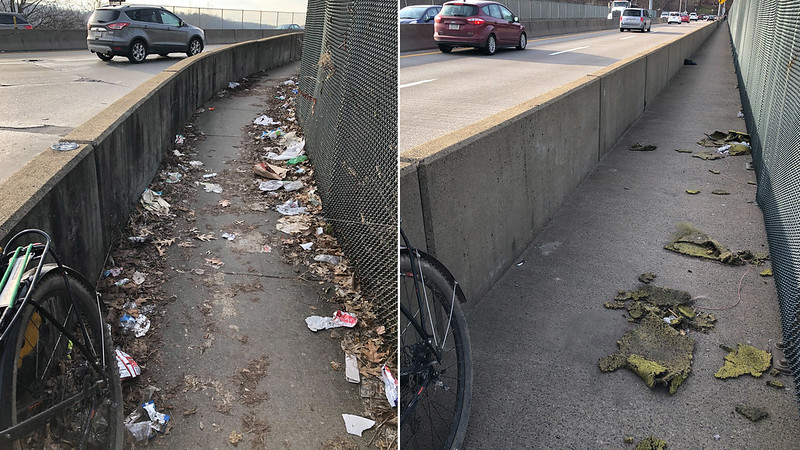 Also, Curb cuts are needed on the sidewalks leading to the bridge from Aspinwall. Why is there no sidewalk on Washington Blvd. heading upstream from the bridge?

Regarding curb cuts: I believe that as part of the construction project to widen route 28 (which is supposedly starting this summer), they are going to redo the offramp intersections that go to Freeport Road on each side of the bridge, and they will both be getting stoplights.  So that will be better for bikes and pedestrians, it will hopefully slow down traffic a bit, and I would assume as part of redoing them that curb cuts would be put in.

Jakubec of Ohara replied “The Township has no responsibility for the Highland Park Bridge or its sidewalks. The bridge is owned and maintained by Pendot.”

so I contacted PennDOT at https://customercare.penndot.gov/

I think the ramp from the bridge to Washington Blvd should be converted to a T intersection with either a stop sign or traffic light so cyclists heading toward the Bud Harris track don’t have to contend with the weave area east of the off ramp. It’s easy enough to either change lanes between Baker St. and One Wild Pl., turn into the left lane from One Wild Pl., or the sidewalk, so the slip lane is not a problem.

Below is the text of PennDOT’s message to me yesterday:

After review, it has been determined that this concern falls under the management of the local city or municipality. Because of this, you will need to contact the city/municipality with your concern.

Information from PennDOT specific to your concern is as follows…
Thank you for submitting your concern in relation to debris on the sidewalks of the Highland Park Bridge. While PennDOT is responsible for the structural integrity of the bridge and its sidewalks, the local municipalities are responsible for the snow/ice/debris removal on the sidewalks. The HPB straddles a number of municipalities. These include: O’Hara Township for the majority of the main span of the river crossing, and the ramps on the northern side of the structure. The City of Pittsburgh for the southern portion of the bridge and its approach ramps. The Boroughs of Sharpsburg and Aspinwall for the areas leading into the northern ramps on the Eastern and Western sides, respectively. We hope this information will help you to track down the responsible party to get the sidewalks cleared, and we appreciate your commitment to public safety!

Should you require any additional information as to why this concern is for the city/municipality, please contact Dylan Soller at dsoller@pa.gov or at 412-429-4902.

I wrote back to Jakubec at Ohara Township:

So to answer the question of who maintains the sidewalk at the north end of the Highland Park Bridge:

Is anybody going to take responsibility for this, or are we in a circular pass-the-buck stalemate?

Is there something you can do, talking with PennDOT, to resolve this?

Maybe Aspinwall and Sharpsburg should be contacted.

Wow.  I have cleaned that whole sidewalk before.  I just can’t do it right now.  I used a leaf blower and walked it all.  Then bagged it at the end.  Lots of glass on the sidewalk right now due to that one little snow they had to plow all the way against the barrier to make sure all road debris gets thrown on the sidewalk.  Oh well, maybe a big rain will get rid of some of it into the river.

You’re saying that when they plow, not just snow and ice, but also trash, gets pushed onto the sidewalk? Including glass? It would be nice to have a video of a plow doing that.

How did PosterGirlDani get the 40th St Bridge stalemate resolved? We need to do the same here.

Public works is keeping up beautifully w/ salting the 40th St bridge sidewalks. ?? I'm still dutifully removing trash (and so are OTHER volunteers!), but I've ended my GoFundMe campaign and now I can ascend to heaven ?byeee

So I’ve been gone from this message board for months, but I hopped on again about 2 weeks ago and I saw this thread.

I found the answer, thanks to Rep. Mizgorski’s office.

It’s the local municipality that is responsible for day to day care of the HPB and other sidewalks.

And in PA Publication 23, maintenance manual, chapter 7, appendix C (I’m not making this up) it clearly states that in state highways anywhere in PA other than Philly that the local municipality is responsible for day to day care of the sidewalks

So, we have the answer — if it’s a penndot road/bridge, and there’s a sidewalk, and you’re not in Philly, it’s the city/boro/township that’s responsible.

So when O’Hara says it isn’t responsible for picking up the trash?  They’re wrong.

When Pittsburgh says it can’t cut the weeds or clean bridges or sidewalks, they’re wrong too.

Now will anyone actually change their behavior?  probably not.

BTW, I’m gone again.  I’ll Check the board maybe in a few months.

Maybe most of the people in the municipality governments are as confused about the responsibilities as we are?

Thanks for all your help.  At the end of the day, no one will do anything, so it is up to myself or some other cyclist that feels energetic.  I think we need to get rid of most government personnel and have lower taxes, so we would have more time, money and energy to do things ourselves to help communities. The only thing governments do is waste money.

Keep all this stuff in mind if you want government to run our healthcare.  Think DMV.  No thanks.  Want something done, you need to do it yourself.