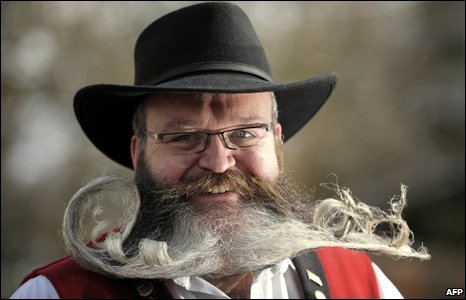 A contestant shows off his beard in the shape of a bicycle in the southern German town of Brigachtal, ahead of the upcoming international beard championships on 28 March.

i bet he rides a recumbent

That IS a truly awesome beard, regardless.

that guy looks super fun to hang out with

You know any contestant in an international beard competition is gonna have some stories to tell.

It’s not just a bike beard. The other side has a breezy swish made of awesome.

I think I’ve seen him before as a winner of the World Beard Championship so there’s a good chance he could win again with this beard.

My own beard is unique but nowhere near as spectacular as this. I continue to dream.

which espn is the world beard champs on?

Now that Lance broke his collarbone, it’s on VS.

i wonder if these guys are juicing or getting beard transfusions

Oh my god… How much aqua net does it take to get your beard to stay like that?

I can see the headlines now (exccept in German) “Man Wins by a Whisker”. Hopefully it is a guy that wins it.

Oh my god… How much aqua net does it take to get your beard to stay like that?

Not enough in the world…think expoxy.

I wonder if there are any openings for beard-championship domestiques? I may not be podium material, but I can by-Gawd carry a small comb and a tube of Brylcreem with the best of ’em.

i really hope that both pics were taken on the same day. that or he definitely has a beard competition outfit.

Missed it this year, but you can now begin working out for next years competetion.

if that windmill beard actually spins with the wind, then i think that’s the superior beard

Hook it to a tiny generator, and power LEDs in the moustache…