Since Hurricane Sandy hit, Manhattan south of 34th St or so has been without subway service or tunnel access. Reports say that taxis, cars, and buses have clogged the bridges into Manhattan to the point that a commute can take two hours. People are turning to walking and biking.

A blogger from Portland took this picture on the Queensboro Bridge. It would be great if some NYC commuters rediscover bicycles as a result of this event and continue as long-term bicycle commuters there.

Are any of you in NYC or NJ, on bicycle?

Been reading his posts. It’s an interesting take on everything from a Portlander who blogs about bicycling in Portland.

As an aside, check out the last photo of the bicycle parking pad outside Barclays.

Man I would just be riding through the gridlocked traffic rather than messing about with pedestrians!

Also, in one photo with the dedicated lanes, with a nearly empty sidewalk not 6 feet away, people are walking in the clearly marked bike lanes. I realize this is a disaster and the whole thing is new to people, but, wtf?

edit; checked out the Barclays Center thing. HOLY CRAP! No possible way I’d be waiting for a bus.

I know right? I realize it’s a long walk but it beat waiting in line for a packed bus that then has to inch its way across a bridge.

Check out this great NYT photo, in which commuters wait to transfer from bus to subway, all the while a convenient alternative dangles literally above their heads: 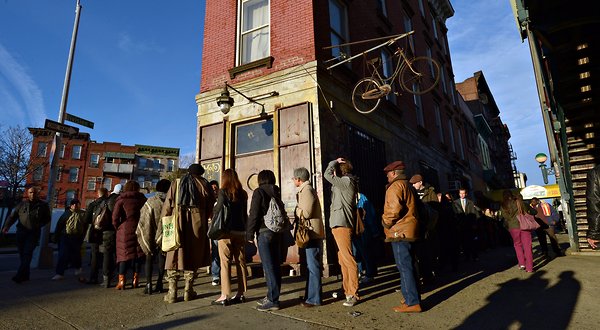 Somebody float a barge filled with old bicycles to Manhattan, Brooklyn, and New Jersey and sell them for $10 each!

A cyclist in the city, pre-Sandy: People are using pedal power not just to get around, but for electricity: here’s a story about a custom pedal-powered charging station for cell phones and other devices, in the power-less East Village:

Biking here in New York yesterday and today has been really inspiring. There are so many cyclists on the roads and many of them are new cyclists. We (Transportation Alternatives) are doing a lot of work this week reaching out to the cycling community, giving out free coffee in the morning, free bike lights donated by planet bikes at night, providing a massive bike valet in times square tomorrow and educating new cyclists on how to ride in the city. The goal is to retain a lot of these new cyclists and this article from the NYTimes shows that a lot of these people plan on continuing to ride after everything is back to normal

Man you guys are awesome. Thanks for posting! Though if things go your way, nothing will go back to normal, it’ll be better. Be well.

A similar thing happened immediately after post earthquake/tsunami Japan – bicycles become the only means of transportation. I wouldn’t have thought of a bicycle as an “emergency vehicle”, but I guess it really is.

“I can’t describe how thankful I was for protected bike lanes when I had to forage up down seeking cell phone connectivity, phone charge, access to my bank account and food. Expanding the bicycle network is probably one of the best things this administration has done for New Yorkers.”

Another person writes that attitudes toward cyclists are still poor, ‘the “hey asshole, get a car!” shouts i get when i bike’.

I love how “food” only manages to be the 4th most important “need”. At least it didn’t get beat out by PBR too.

South of NYC, in New Jersey, here are pictures from the Henry Hudson Trail at Sandy Hook Bay (a trail along the shore).

pictures from before the storm

It would surprise me if Mayor Bloomberg goes back to pre-Sandy-normal regarding HOV bridges into Manhattan.

I could see him going back to unrestricted car access on one or two bridges, but I think this presents a strategic opportunity that he won’t fail to exploit.

Because he rolls that way.

On Thursday 11/1 (three days after the hurricane hit) “the NYC DOT counted 30,000 cyclists riding across the East River bridges, more than double the normal 13,000”.