Things are progressing pretty darn well with my bike build but I have a question,

i would just take it into a shop (preferably kraynicks) there are quite a few variables and its worth getting right.

Do you have the bearing cups out of the frame yet? The fixed cup can be a bear to get out AND some are threaded to the opposite hand (right? left?). You’ll need to get them out to be positive, anyway. Second to Kraynicks, he’ll have the right wrenches, and should be able to tell you which way to turn them.

I just converted over a 73 Schwinn cup & cone set up to a modern sealed 110/68 English BB. I had to press in an adapter made by TruVativ. You will have to do some some measuring to see if the adapter will fit. If it does this will open up alot of options.

They sell these at Thick bikes for $15

I thought about that adaptor and if one would work for my bike. Im kind of lost since when I removed the cranks (with an angle grinder) there was no bearing cups I have a straight threaded cylinder 1.73″ i.d. 3.something long I measured it with my micrometer but forgot the measurements this morning when I went to work.

?? No cups? What did the bearings run in?

I think I need pictures of this, because all I have is an image of a BB spindle suspended in midair.

More than likely you have a standard bottom bracket shell. What bottom bracket you will install will vary greatly depending on what cranks you are going to run.

I have to ask, why did you cut the cranks off with an angle grinder?

Try as I might, I could not get the cranks off, the bolt head resisted all my attempts at freeing it, I ran thru half a can of PB blaster and couldnt get it to budge.

The chainring was banged up and missing two teeth and someone had spraypainted the cranks and pedals an ugly color so I knew I was replacing all of it anyway so instead of trying to get it free I just cut em off. very therapeutic. The progress so far has been pretty astounding since I only sort of know what I am doing. I know how it is supposed to work but I havent actually done alot of it.

Ahh, yea I understand now. Been there done that. It feels good to get midevil on a stubborn part sometimes.

What cranks do you think you will be using now?

im planning on going single speed so it will probably whatever I can find at free-ride that will fit the BB i end up with.

here is the bike as it is now 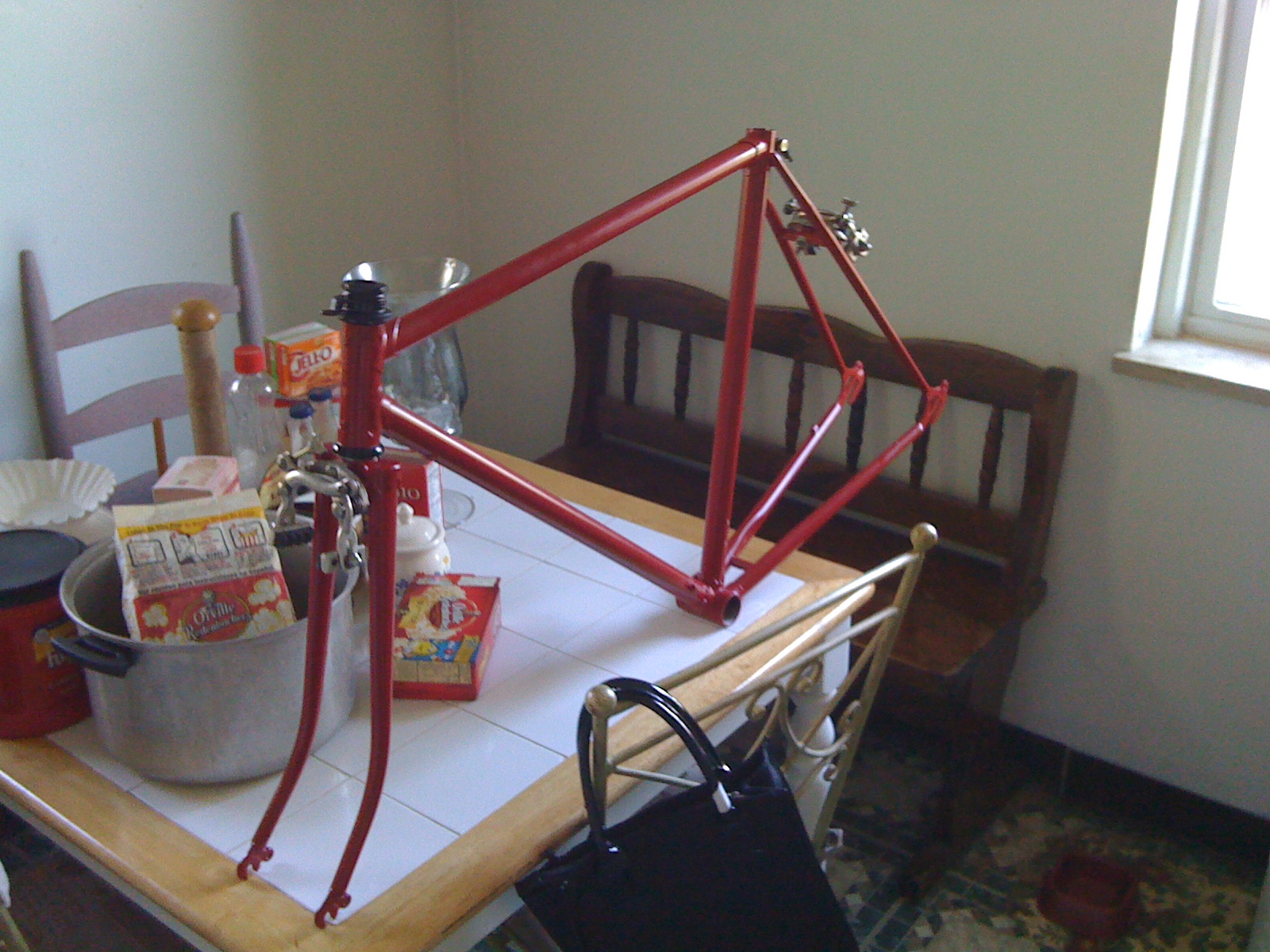 here it is when I got it. 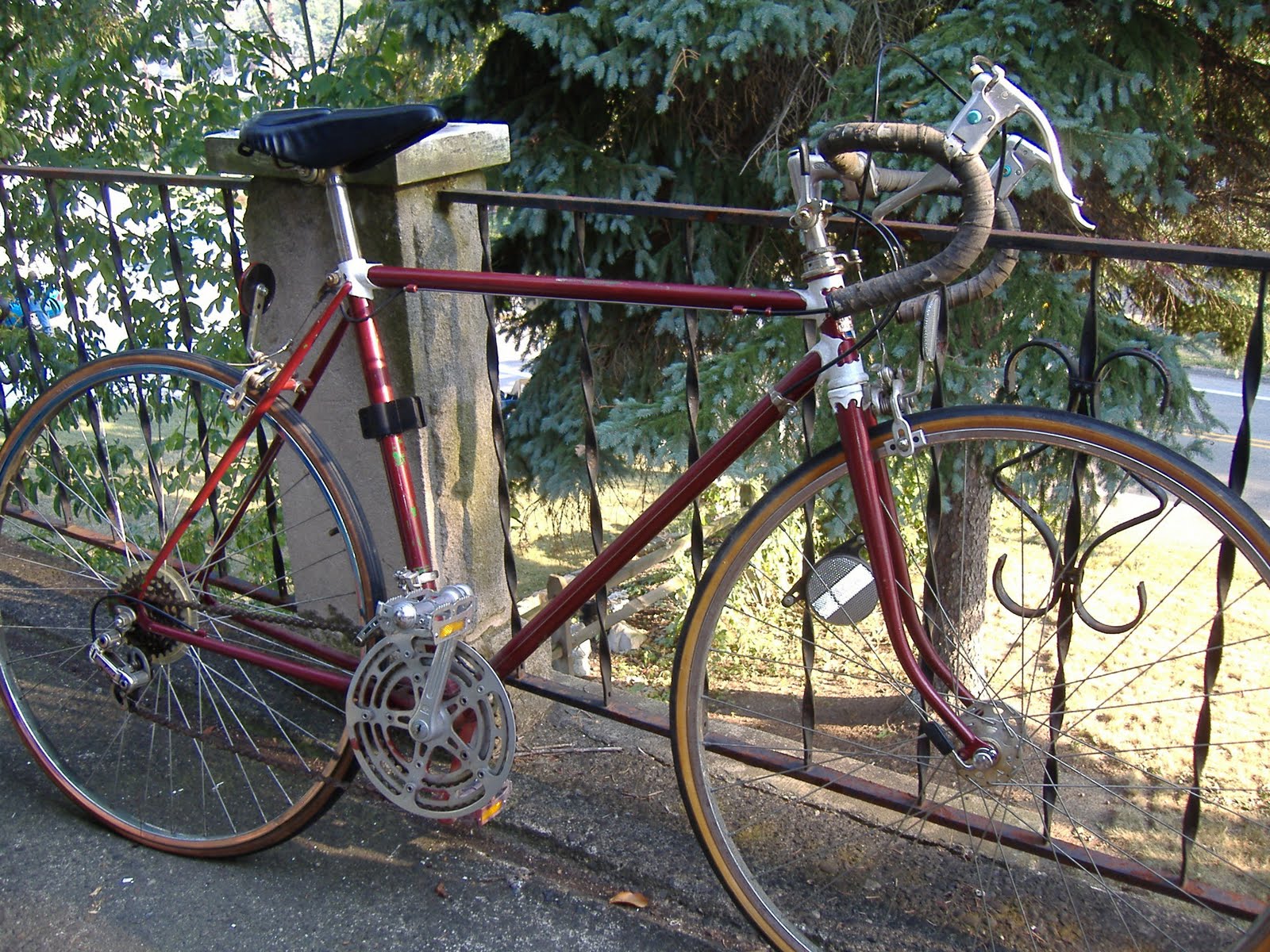 I cleaned and cut the handlebars to make them more bullhorn like.

Any idea where “Ventura” was built, is it Japanese? If I’m not mistaken, most Japanese frames used “English” threaded b-b’s, but, check. Also, if you painted into the b-b threads, you’ll need to have the threads “chased” clean with a tap, a job for Kraynicks or maybe Thick.

Kindof a shame you had to kill those cranks, not bad looking, probably SR or Sugino? Oh, well.

Just in case you didn’t already know, if you’re going single speed (not fixed), a single freewheel will thread right on the hub in place of the gear cluster, you can use the wheel you have, assuming it’s usable. If you want to do fixed, you will need a wheel with the fixie hub and lockring.

Not fixed (i dont have that kind of coordination) I taped over the threads before painting so they should be ok. those years in machine design actually paid off for once)

rear wheel is in good shape. I figured I would be able to switch out the cluster for a single. I was just gonna shorten the chain and use the cluster (depending on which cog the cranks lined up with) Actually the cranks are still ok, I only cut up the spindle to get the BB out granted they are covered with silver and ugly purple paint but I could fix that, I would still need to replace the chainring I will look at them closer when I get home. once I cut them off I just sort of forgot about them.

MMMMM, Coffee, Jello and popcorn. That is some working on a bike fuel right there.

It would help if you could get the cut off parts of the BB out of the cranks, you will need to know overall length. My guess is that it will be in the 120’s, 122 or 127mm. Next you need to measure the width of the BB shell in MM, it will be 68 or 73 mm wide. If you get another measurement, such as 70 then you are dealing with something rare such as Italian threading, I am not familiar with how to identify and other threading.

that red frame is pretty.

If it turns out to be 110mm 68 English thread I have an extra Shimano BB new in the box. I picked it up at the swap meet this summer for $10 but did not use it. I can re-gift it to you for the same price.

If you want to use the crankset you have, for a single spd, you’ll probably just want to use the small chainring, so if it’s the big ring missing teeth, don’t even worry about it.

To get the cut tapered ends of the spindle out of the cranks, there’s a tool for that, so don’t get out the sledge hammer. If the spindle bolts are still in and frozen, use a hardened socket (usually 15 mm) and an impact driver, THEN the hammer. The bolt may snap, but for what you are doing it doesn’t matter, as long as they snap off deep enough in the hole. 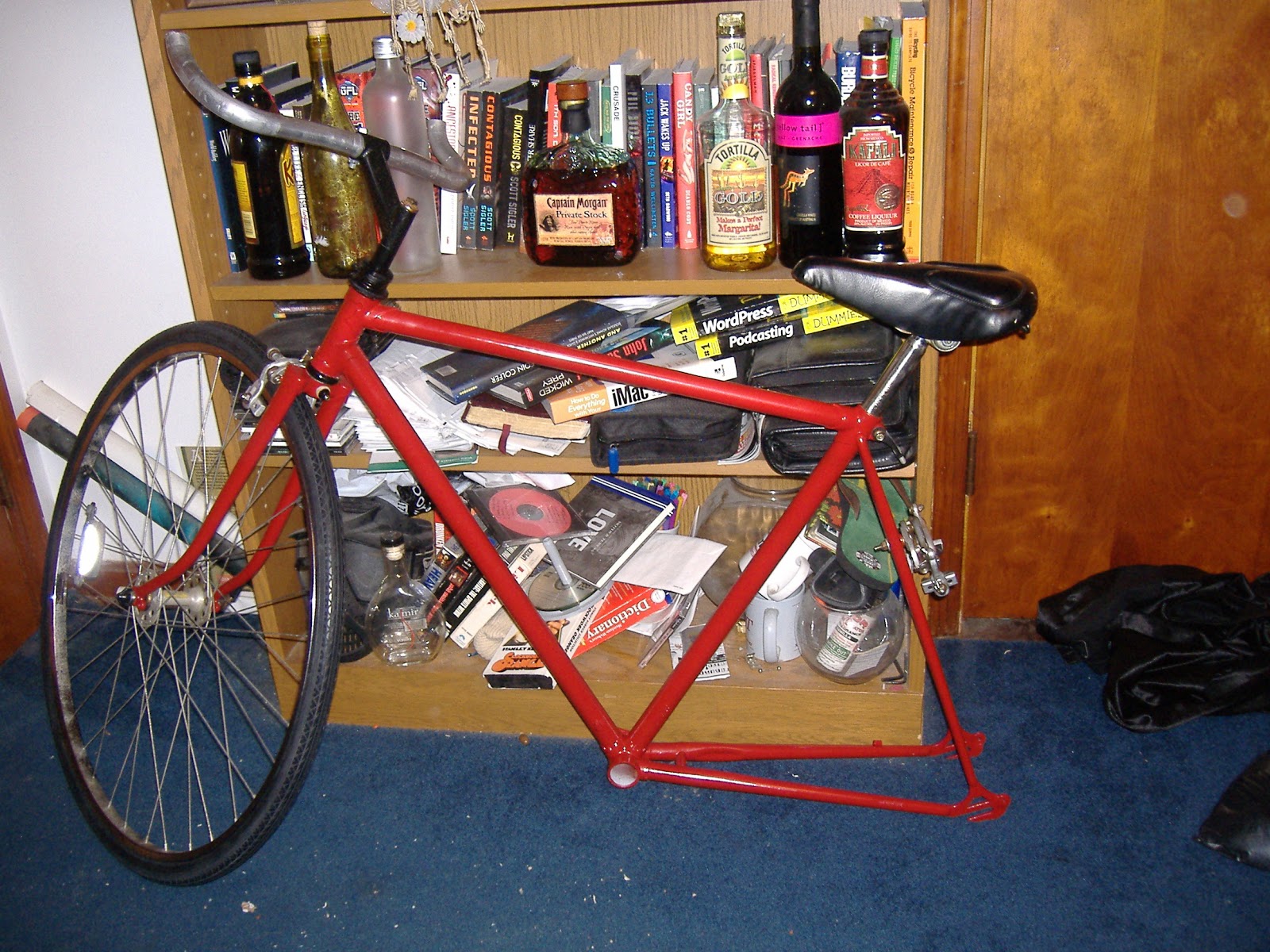 Here is a pic of the bike.

The BB is 68mm wide and a inner diameter of 34mm

This does lead to a separate question that I encountered today. the whole story is over at http://fatguyorangebike.blogspot.com/2010/10/bing-bang-boom.html

but the short of it is I ended up buying a 27×1 3/8 tire and have a 27×1 1/4 wheel. I know with MTB there is some give on the width of the tire, is there the same kind of give or would this be a no no. Im not sure but I did manage to blow up the tube (like loud, like scare me and get people running loud) so I have to wonder if it was the tire or not before I try another tube.

Edit I just realized the photo. man I own a lot of alcohol.

Check the thread type if it’s English I have a BB for you!

Here’s your lowdown on bottom bracketry:

It’s more likely that it wasn’t seated right. If it’s an old steel rim, it will not be “hooked”, with a ridge on the inside of the rim edge, as modern rims are. That makes it easier for an improperly seated tire to slide out of place and blow out. Also, if the tire was stored on a hook, or stored folded, there may be a kink in the bead that will make it more difficult to seat right. Those kinks can usually be worked out by hand with the tire off the rim. Put the tire back on and pump it up 10 psi at a time while keeping an eye on the bead to make sure it is seated evenly all around on both sides.

I also had a new tube blow recently. I’ve been doing this for years and am pretty confident I installed it properly. It was one of the freebies from the Performance opening, and I’m wondering if it was just defective.

Yeah I tried it with another tube, pumping it up slowly and making sure the tire was well seated, it worked just fine.

Still the gunshot loud bang of the tube blowing was quite exciting.

I got to say compared to the Big orange beast this bike is like a feather on the wind.

speaking of performance and blown tubes, does anyone know if they are still taking tubes to recycle? i don’t care about getting store credit or anything, i just have a bunch of tubes i’d like to recycle.

I don’t know about Performance, but if they are ‘patchable’, free ride will take them.

are ‘patchable’, free ride will take them

Define ‘patchable,’ will you accept tubes with one patch, two patches, three patches? pinch flat holes and no patches? All of the above? I’d hate to drop off stuff that you just have to throw out but I’d love to have a place to take tubes that are probably perfectly okay but violate my “two patches and out” personal aesthetic.

Every volunteer night there is usually a group that goes through tubes testing them. If freeride doesn’t take them, I don’t know who else would.

So Piece, what you are saying is that if the tube will hold air, it’s a keeper? I’m happy to put a patch on before I donate it…

@jeff It’s been my experience as a volunteer that if the tube will hold air – it doesnt matter how many patches are on it. Of course as a practical matter, I wouldnt knowingly put a bad tube back in service either. Expand this reasoning out to all of the other bike parts and you have the essence of freeride in my opinion. If you have a flat and can’t afford a new tube, a tube with four patches is fantastic.

If it holds air for ten seconds and you can’t hear the hissing.

I find that every patch leaks a little bit, so that tube with four patches needs pumping before every ride.

Dirty Harrys can take tubes that are wider than a regular road tube and are 26″ or larger.

The tubes are sent off and used for making backpacks or something like that.

Even if they don’t hold air, they send the junk ones to Alchemy Goods who turn them into $40 wallets and $160 messenger bags. So.

@noah, are you talking about freeride or dirty harry’s?