In response to the “bikelash” thread, I propose a challenge. Take pictures of bicycle riders specifically in new Pittsburgh bike lanes, between now and let’s say, 11:59 pm Dec 31, 2014, post them here. No photos from A’dam or elsewhere, Pittsburgh. Rule 1, I would ask that the photos not be of a group ride or special event. Normal daily commuting and riding. Rule 2, no “trails” i.e. Eliza Furnace, etc. We want something to turn over to the powers that be as defensive ammo for the Bike Lane Haters, a picture book, so to speak. Heavy weather conditions merit special consideration. Time/date stamp would be good (can smartphones do that? Dunno). Whoever captures the most riders in a single image wins. In January I will buy the winner a beverage of choice at OTB at a time of convenience, to be arranged. I may even up the ante at some point.
Undoubtedly someone will do counts on these lanes at some point, but pictures speak. Go.

The PowerPoint to accompany this must include Rule #9, plus an explanation.

Also, including non-visible data such as temperature and wind speed would be helpful.

I caught 4 this morning. Meh. 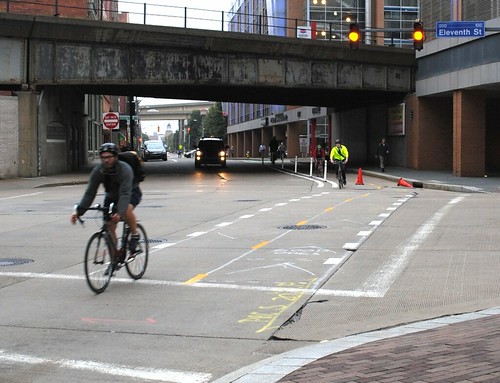 That’s me in the yellow!

Nice! Red with 4.
Just noticed an awkward possibility I did not foresee – catching someone running a red light. :O
You’re OK mjacob.

Haha, if you look at the sequence it’s green when I start entering the intersection but it could definitely look questionable otherwise out of context.

I usually come down Smallman, but detoured over to Penn at 21st just so I could use the lane down to 11th. I’m headed up Grant, so am rarely farther downtown on the Penn Ave lane, but I can help boost the numbers from 11th to 16th.

Ha! I wondered if I was going to snap any board regulars.

FWIW, I was there @8:20 (NOT at 10-o-freaking-clock, Eric Heyl!) and stood for only 3 light cycles before I was able to snag 4 cyclists at once. They trickled in 1 or 2 at a time on the other light cycles.
I was in a group of 4 cyclists myself on my trip back in, so catching dozens and dozens of cyclists during rush hour is easy.

This is OT re this thread, but yesterday I got caught in a frackin’ bicycle traffic jam on Ellsworth; about 6 bikes moving at different speeds not really able to pass each other due to the cars… It reminded me, for a moment, how it would feel to drive a car during rush hour.

Sometimes I get into bike jams in Oakland on Bayard on the way home from Pitt. Instead of being upset I just think it is super cool that we have this problem.

The other thing is that the bikes outnumber the cars, so I’m not sure what drivers are complaining about.

There were four riders and three cars on Millvale at Baum this morning a bit after 10 a.

Seeing a lot of words on here, not so much pictures. ;)

For each 1000 words you should have no trouble visualizing a picture. Or so I heard, I think.

I get to like 800something and then I just picture a herd of baby goats running. Or a sandwich.

goat cheese on toast… I can see it now, really clearly. On a sunny Sunday, with a cup of pitch black coffee and a bowl of blueberries. Thank you for those words!

(if you’re a strict constructionist, this photo may be slightly in tension with Bill’s Rule1)

I think i should stand at Perrysville and Milroy and count cars. For being a main street, there really isn’t all that much traffic. If I am off to the side sending a tweet, I might go a minute or two, some times of day, and not see a car in either direction. Other parts of the same street, like the Perry/East corner, get a lot more traffic.