More details of the route and event here: http://www.chabadpgh.com/templates/articlecco_cdo/aid/590860/jewish/Menorah-Parade-and-Lighting.htm

We’re doing the same route as the cars right after the cars pass, with the one exception that we’re just going straight east from 2100 Wightman to Murray along Hobart to avoid holding up traffic on Murray and be more beginner friendly.

If you can’t do bike+menorah, bike+dressing as a Chanukah character also works. Should be a lot of fun.

I had no idea there was such a thing as a Chanukah character?

Anyway, my boss usually drives in the parade with a menorah on top of his car. I have always been interested in watching this parade, though I usually forget to find out where it is and when.

@byogman, just double-checking…it’s okay for those who aren’t religious to help celebrate by taking part in the parade?

Please, no, nobody is going to be offended if you show up and aren’t religious, it’s a community event. The only way to make this awkward would be to show up in a Santa suit.

And again, if you can’t figure out the menorah, just dressing the part is quite good enough. More on the story from the source of all knowledge.

In terms of character dress, there’s an evil king, a warrior (with skullcap of course), and a (Jewish) priest as the most recognizable characters, and if for a female role, Yehudit is pretty awesome/scary.

And yes, it will be cold, but it’s a short ride with a heated tent and hot latkes (hash browns, more or less) at the end.

Excellent–I’m excited! And yummy latkes too!

This sounds like fun. Make sure you “top” the thread as we get close – I tend to forget stuff…

And there’s FooD at the end, yum!

Fun fact (kinda OT): this time of year, patients often wish me a happy Chanukah. As far as I know, I have no Jewish ancestry.

I’m in. Handlebar Hannukah. got to go out and buy a menorah and start my feeble battery-pack wiring skills.

So I count 3 possible riders from this list in less than half a day. That’s great.

The challenging part, of course, is mounting the menorah on the bike. Thinking of putting together a little mailing list for sharing ideas/war stories.

I’m in. Please let me know of any other “faux pas” that could offend (like the Santa suit thing). Are colored lights on the bike ok? I recently clipped red and green little spoke lights on, but they come off easily if you think they’re inappropriate.

Any idea where to pick up an appropriate battery powered Menorah?

this makes me so happy that it’s happening. i’ve been wondering if anyone was going to do this for years. if you need some more promotion, let me know, and i can put it on the bikepgh blog/facebook too

Colored lights are fine, especially if they’re blue and white (as opposed to red/green). And if you can get a menorah going, too, I think you’re cool no matter what.

Battery powered menorah, I’m guessing you can grab one at Pinskers. There’s (just) enough time to order if you do it now.

Right now I’m leaning toward a fake menorah made of whatever plus bike lights. Maybe we could re-stock the pool for a bike safety program that way or something.

I’m surprised that this is something that’s been thought of before. Absence of results from bike + menorah and all. Absolutely let’s promote it. The more riders the more fun this is.

EL wired Jewish Stars in wheels would be great

well, you know it’s a natural thing to think about. you see the Menorahs on a huge line of cars here, and it’s like, that’s cool – would be cooler on bikes

I’m probably game for this. There are a lot of battery and solar powered lights at Target, including some off-the-shelf menorahs of various sizes. I think it will be fun to make one and figure out how to get it on the bike. Can we just post our experiments here instead of a separate email list? There are also battery powered tea lights that fake flicker like candles…those could be affixed to all manner of things.

@ byogman: do you think the cars will be willing to keep a bike pace along 5th ave?

Also, if anyone has a spare trail a bike, you could make a HUGE one. Just sayin’…

Erok, you apparently think a lot like I do.

For doing the discussion here, would work for the folks here, not as much for the folks I’m trying to rope in from the religious community.

On the question of pacing along 5th, I’m sure we’d be enough slower than regular car traffic pace to annoy some people, but there are lanes and they can get around easily enough.

We’d also be following a long trail of cars with menorahs that are also parading around slower than the regular traffic. Don’t know if we’d keep up with them, but I do think there’s safety in light and numbers if we can build that up.

One of the ideas I’ve kicked around to make this more novice friendly is trying to get someone in a car to screen us from the rear, carry supplies and bike rack. Anyone want to volunteer?

This is a YouTube video of the 2007 car menorah parade: https://www.youtube.com/watch?v=J7-iEygh70E

The pace looks OK, and they have a police car bringing up the rear.

I will be posting pics of version 1 (the backup plan, car menorah isn’t available yet) tomorrow hopefully.

Regular bike rear light + 8 of these http://nathansports.com/our-products/reflectiveled/essential-accessories/led-safety-strobe, clipped onto foil covered cardboard cut to menorah shape, backed by a cheap structure of small plywood fragments (which I still need to get glue for and clamp together, hence nothing just yet).

This is on, people! And believe me, can’t get much more amateurish than what I’ve got, so don’t fear looking homemade. Share your rig as you get it together.

If you have a car menorah already and it’s powered through the cigarette lighter, there are cigarette lighter kits at the autozone in wilkinsburg cheap and the guy I talked to on the phone, Shannon had some ideas in terms of getting it connected and powered with what they have there.

OK, so here’s the picture. 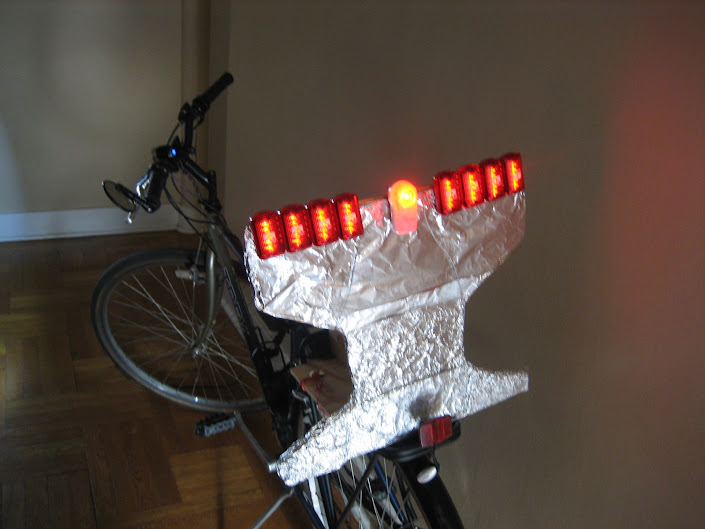 Don’t know if the url is stable so album link follows.

Nicely done! How is it actually attached to the bike?

Did you make some kind of wooden “L” shape that’s tied to the rack?

I’m glad you posted this because I’ve been thinking about how to make the individual arms sturdy enough and you’ve done away with that problem entirely by focusing on the “flames.”

The plywood is basically an L with another piece stood up vertical and against the vertical part of the L.

Awkward to clamp in two directions since I don’t have a workbench or small clamps, only long ones and my dining room table, but managed well enough to get things steady. Finished off with a couple nails, since I didn’t trust the glue by itself. Given how shoddily it was made (not a right angle to be found), it seems decently strong.

There must be some political signs floating around still, made of corrugated plastic, that would be rigid enough to do the job and light enough not to be burdensome.

Stu, I love the idea of turning political litter onto these on multiple levels, thanks for contributing.

All watching this thread, can I get a rough count of who’s doing this? Happy to share tools, etc… if you can swing by my place.

I’m still planning on it.

I am there. I have a notion for a Menorah, although now having seen your (excellent) work I think a bit less of mine.

Unless the weather does a 180 and driving to town looks dicey I’m planning to participate. I have the blue frame light on the bike and working on my menorah.

Thanks for the responses guys! Let me know if there’s any way I can help. And to anyone that’s still not sure about getting a menorah on, you can just google the Chanukah story and go in character.

Vannever, if you saw the other side of my rig you’d get a pretty clear idea how hacked together mine is. Narry a right angle in sight. If you can get a menorah on bike, it’s awesome, period.

By the way, our little thread is now top result for bike menorah. First victory in hand! Now we just need to do the ride and get some pictures from it!

Here’s a link for an electric Menorah:http://www.partycity.com/product/electric+menorah.do?utm_source=Google&utm_medium=ProductSearch&utm_campaign=GoogleMerchant&extcmp=GoogleMerchant&gclid=CKrQzsLt-rMCFQyk4AoduikA2Q

Hi Val, second link was blocked by my Norton-ware. For battery powered menorah, I did quickly find this http://www.judaism.com/display.asp?nt=DH&keyword=led%20menorah&etn=BACEJ.

For those that don’t know, Pinskers in squirrel hill and this site are run by the same guy, so you may be able to find this in the store. Worth a call.

The party city link looks good for regular electric menorahs. One of my thoughts at one point was that + computer UPS (had been thinking of buying one anyway). A bit heavy, but it’s something I could use anyway, just wasn’t sure about how well the batteries would do if it were really cold.

Generally, other than Pinskers, I really have no clue of the retail options, you could call synagogues and see what they have in their gift shop. Or order online and have them rush it. Or, totally DIY menorah as I’ve done… there’s a good number of places where you can get the lights.

I went to Target and Lowes and a craft store (Micheal’s, possibly?) and there was bupkiss in the way of menorah.

I had just received a gift of ten tiny clear lights with a battery pack for the recent Flock LightUp Night Ride (from srpit who bought them at CostCo), I’ve also seen them at Lowe’s where they’re Item #: 258315 and Model #: BO-10LC for $3.00. It’s ten white lights on a string, and the project calls for nine so I’m stashing one out of sight. 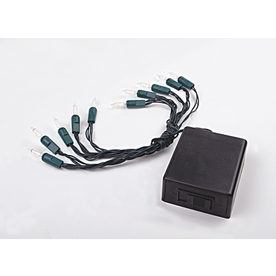 So my first bad idea was to build a candelabra out of PVC pipe, I have a bunch of that in my basement from my son’s DIY marshmellow-gun period, but it seemed inelegant and a bit too much like plumbing.

Inspired by Stu’s comment earlier, I broke out some coraplast that I’d glommed when Long John Silver’s was swapping out their marketing materials, and ended up with this:

I think I’m going to mount it on the platform of my front rack, parallel to the handlebars and perpendicular to the bike’s movement. With the battery pack in the center and secured by the zip-ties, the weight would be supported by the rack.

That’s awesome! Much more like an actual menorah than mine.