http://www.caranddriver.com/features/more-tickets-in-hard-times suggests the opposite. It appears that most police departments don’t get much revenue from ticketing, but they could if they wanted to. It would just annoy a whole lot of people. When they do try to raise money they focus on out-of-towners, for just this reason.

And maybe change the stupid law that doesn’t let our cops use radar guns.

They were talking about this a generation ago. Some of the stupid reasoning, even then, was that it was too much trouble to train municipal level cops in the technology. C’mon, guys, that barely made sense in 1983, and makes even less sense today. In 1983, we had four-pound Betamax video recorders. Now we have two-ounce helmet cams. I cannot believe a similar evolution has not also taken place in speed monitoring tools.

“And maybe change the stupid law that doesn’t let our cops use radar guns.”

Among other reasons, radar’s margin of error in a less-than-ideal (anything but flat open space without any other moving objects) is too large to hold up in court. This is why most states us LIDAR and VASCAR I/II.

There is virtually nothing keep cops anywhere from setting up a speed trap using any of other non-radar methods of speed tracking. The law keeping radar out of cities is a non-issue.

Used to be that once a year they would set up a speed trap on Schenely Drive in front of Phipps about once a year and pick off a few dozen speeders in an hour. Same thing on Shady.

I haven’t seen that at all this century.

In the City of Pittsburgh, police costs for court appearances for traffic citations were of great concern in the 1990’s and some officers were making a ton of money handing out tickets. As a result, the court system changed and the current system no longer requires the officer to appear and the information on the face of the ticket is deemed sufficient for purposes of proceeding in court. When the change occurred,(and officers were no longer paid for court) traffic citations dropped 70% in the city. The city police have no incentive to aggressively hand out citations where they get a ton of shit heaped on them and then do not get paid for the time they have to show up in court, which is scheduled when they are off. Sounds crazy but it is true.

The whole setup is stupid. If you get a ticket, you have a big incentive to go to court because the judge will more or less automatically reduce your fine and/or points, and in the meantime the cost to the public has increased dramatically. There has to be a better way.

On a similar note, the enforcement of the sidewalk shoveling ordinance is awful. It’s what, 2 weeks since we had any snow, and there’s still snow/ice all over the sidewalks. The city should employ a crew to do the shoveling and send the homeowners a bill for the cost + $100 fine. Make it +$1000 fine if the jackasses shovel their driveway and leave the sidewalk untouched.

@freakflag51 I believe city introduced liaison officer to represent police in court somewhere around 1995 so cop who issued a ticket should not appear in court.

@salty, I have read before that the city hesitates to enforce the snow removal rules because it puts a burden on elderly citizens – who put their votes where their mouths are.

Maybe the City would consider assigning officers to monitor those areas where bicyclists are at greatest risk along commuting routes. Penn Avenue? West Carson? Squirrel Hill, Shadyside and East Liberty? Just having a police car sitting there with the lights on always seems to slow drivers down. No increased police costs-no court appearances for tickets.

I was at a city meeting after Snowmageddeon and learned from them that they need to receive a specific complaint. Emailing 311 and saying that people aren’t shoving won’t work, you will need to say that the sidewalk in front of so-and-so’s business or at such-and-such address has not been shoveled. There is a time frame but I don’t remember what it is.

(I know that the City will not accept complains about streets not being cleared until 24 hours after it is stopped snowing.)

> @salty, I have read before that the city hesitates to enforce the snow removal rules because it puts a burden on elderly citizens – who put their votes where their mouths are.

they have recently (this year?) introduced a program for those who are unable to shovel their own walks to arrange to have someone else do it for them (a city-arranged volunteer, i think?). i think it’s called Snow Angels…

I thought that program was called “common courtesy”, but…

Anyways, I’m sure there are cases where someone can’t shovel, but I see an awful lot of rentals that are not shoveled. Last weekend I walked by this gigantic house on Aylesboro with a big circular driveway that was absolutely immaculate while the whole sidewalk was covered in ice. I see a lot of shoveled driveways + unshoveled sidewalks which is pretty clear evidence the resident is not unable to shovel.

I probably don’t have it in me to narc on people although if I knew that reporting it would result in a crew being dispatched to shovel the sidewalk I might.

Yeah, landlords are the worst in terms of snow removal. I’m going to start reporting the folks on my street who don’t do this — it’s a real problem, and dangerous for the old people in my neighborhood.

But if cops enforce laws here who is going to stand or sit for hours on end on overtime to watch construction and Duquesne Light work downtown?! What a joke. They sit out front of my work for 8 hours sometimes. Most overtime,most literally standing and looking at a hole.

Lets face it the powers that be in all of this drive cars…well usually huge SUVs. They don’t care about people walking or riding a bike. No one does. Best to do your best and be careful in your commutes. I don’t think anyone will pay much attention to a walker or cyclist. I 311’ed the Highland Park Bridge and they said it was up to PennDot. Should I contact PennDot and tell them to not plow the snow onto the sidewalk so people can walk or ride a bike across the Highland Park Bridge? I guess I could, but PennDot? Goodness, they throw debris on the sidewalk themselves all the time. They don’t care about anyone but themselves. 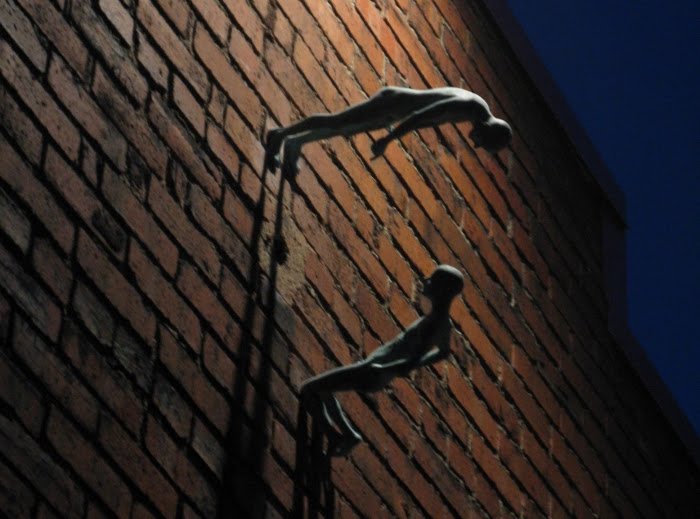 Totally cool sculpture, V, would have made a great tag, but what’s the point?

ETA: Psst, Jonawebb: tag 179. But I don’t get the relevance either.

“They sit out front of my work for 8 hours sometimes. Most overtime,most literally standing and looking at a hole.” ^^2 comments up.

Sorry, I was offline for a while. It’s just that people say, gee these guys have elevated this staring-into-the-hole routine into an art form. And, just as art imitates life, it has indeed become an art form n’at. Life is funny.

I really have to go back and memorize all tags prior to when I joined the game.

@jonawebb I can’t find a link to the post directly, but it’s at the bottom of this page. I don’t have them all memorized but don’t walk your bike dozens of flights up a building for a tag.

The Cathedral stairs tag was the lamest tag, ever, in the history of the game.

And I went to get it!