Boring holes on the jail trail?

I noticed pink flags in several spots today marking at least 4 spots. Does anyone know why?

Are the holes/flags near the Birmingham bridge? They are suppose to erect some sort of structure to protect the trail while they work above, so they might be associated with that. Otherwise I have no clue.

Nope. They stretch from the parking lot on the greenfield side to the bridge.

I believe your holes are now filled in, and really… were they that boring? 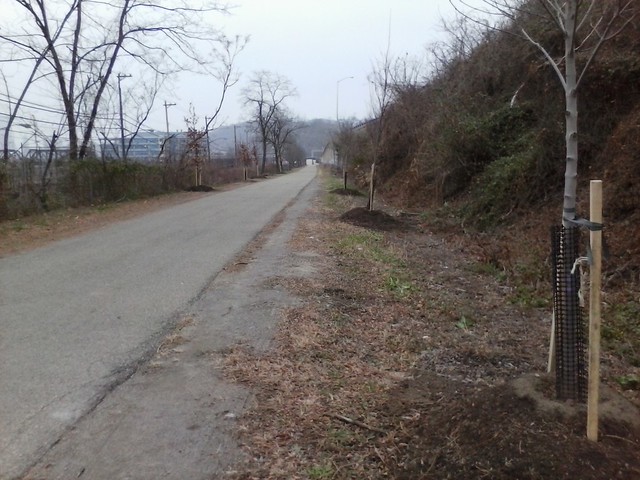 No, not the trees. Holes further up the trail.

I rode past those today and don’t have a clue what they could be for. Usually they take core samples to determine what the soil/rock composition is before they build something, but those holes are really spread far apart & they are in the middle of the trail.

(warning: wild ass guess) I wonder if PennDot is contemplating extending the on-ramp to the Parkway East there. That ramp (from Bates) is very short and doesnt give a lot of space to get up to speed before merging.

Probably related to those flags/holes, work was being done on EFT this morning. There was a large truck, cones, and a flagger!?!? that denoted EFT was down to “one lane”.

Maybe marking a gas or water line? Peoples bored holes and then filled them up on my street last summer. Maybe they were putting in new valves?

Yes, they marked water/gas service line junctions in my neighborhood this summer as well. I think maybe they were digitizing the information.

They used a metal or other detector to locate the underground valve/junction. Then they dug it out, to expose it, and did a visual confirmation. They then covered it back up, and marked the location with paint and a small flag.

I asked the guy if there was a problem or a leak that they were looking form and he said no, they were just locating them.

It is very possible that the EFT has many such “crossings.”

But, I have no way of knowing if that is what the boring holes meant, of course.

I’ve seen that equipment out there a few times this week (flagger and all). I’m very curious what they’re doing as well. The holes are only a few inches in diameter. I’m guessing they’re installing a roof over the trail to keep us dry in the rain. Oh! Wait! No! It’s radiant heat for the winter! Imagine a nice dry, warm trail ride during the winter!

Maybe I’ve been reading the “Pampered European cyclists” thread too much.

Those holes sound pretty similar to the ones the Gas Company dug on my street.

Interestingly I had EQT and now people’s. Wonder if this is part of the merger?

Were those MCI fiber optic flags always around? There looked to be some newer marking paint around them after the holes in the ground, towards Greenfield

Sounds exactly like what they did in my neighborhood.

They never came back to get the little flags, which were ultimately destroyed by the lawn mower, weeks later.

Just a marking/mapping exercise, I suspect!

DLC contractors taking soil samples prior to installing electrical conduit under the trail.