Bring your own Bike lane

I think its an interesting concept, but I dont think that most motorists would understand what the lighted lines mean. I think that they would just assume they are decorative, but I guess if it makes you more visible then its good.

If I could deck myself and my bike out like a Christmas tree, I’d feel much safer riding on the road at night. This might be overkill (read: more expense than it’s worth), but hey, why do people buy Cadillacs? Not for me to say.

I do like the projected bike lane. I think it could actually be done DIY pretty cheap if someone made a bike graphic laser pointer pattern.

People buy Cadillacs because they don’t realize they are no longer signs of status, but signs of not being able to identify a poorly made automobile.

It should project “please don’t kill me bro”

The laser-projected bike symbol is reborn: the Blaze Laserlight: 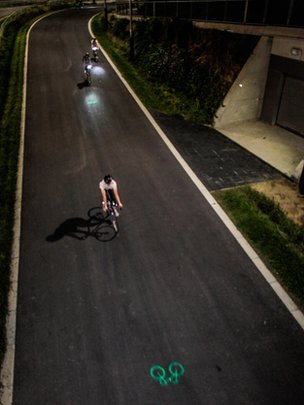 As the resident Wet Towel, I don’t think these are a good idea. My main concern is the fairly common situation of puddles in the road. That laser, bouncing off of the even surface of a puddle, then reflects up into the windshields and rear-view mirrors and retinas of other road users.

Get these common enough, and then we’re getting our retinas burned by every Nth passing cyclist. Or whatever.

[Also, I love how threads from five, six years ago come back to life.]

I would much rather just have a weapons-grade laser.

Counterpoint to bike menorah, I’m just waiting for someone to take the “lit up like a Christmas tree” thing literally, and pull one, fully lit, through the holiday. To second Stu: one of the stated goals of the device to somehow be more obvious while riding in another vehicle’s blind spot. I can’t imagine any circumstances where this would work better than proper lane positioning, and I can imagine some (like a cyclist passing slow/stopped traffic, and the about-to-be-passed motorist paying attention to the weird glowing thing on the road ahead to their left or right rather than their side mirrors) where it would seem to make things worse.

FWIW, their web site says “It’s eye-safe. The beam is fully tested and certified so it’s not harmful even if it catches the eye.”

But I assume it would still act like any bright light if it gets in someone’s eye. Would it be any worse than a strong bike light angled down and perhaps bouncing off water? I’d think it would depend on how strong the laser diode is, which they don’t say. (They do manage to dismiss the type of laser diode in the apparently-still-in-development product in the original post. “DPSS lasers won’t cut it.”)

video of the Blaze Laserlight below. I’m not that impressed. It’s not that bright, and it draws your eye away from the bicycle itself.

I dunno.
But if someone comes up with a laser-guided paintball shooter that gets triggered by moving vehicles that pass by <4′, I’m game. Especially if they offer a choice of colors (and maybe fragrances).