Hey everyone – longtime lurker, first time poster. Pittsburgh is lucky to have this community.

We’re looking to get rid of one of our cars and replace it with a cargo bike that does the following (not all at one time):

– carries my 3 year old and another kid (on the way)

– carries a couple bags of groceries

Me and my wife already have bikes and we carry the kid and dog in trailers. We have an old Burley for my kid and this for my dog (http://amzn.to/hO07Ud (that’s me and my dog in the video review)).

What I’m looking for is dedicated, contained vehicle. We’ve been thinking about an Xtracycle, but I’m really drawn to Dutch bikes like the Bakfiets (http://bakfiets.nl/eng/) or Boxcycle (http://boxcycles.com/). But they’re expensive and I’m worried about ongoing maintenance without a local dealer.

– Anyone making something similar locally (including neighboring states)?

– Anyone have a Bakfiets or Boxcycle I can check out?

First, awesome, I was recently saying that some dealer should get into cargo bikes.

Having said that, I wouldn’t worry too much about maintenance, there’s nothing on a cargo bike that any decent local mechanic couldn’t get right. I guess I’m saying, don’t let that stop you from ordering one from away, after you’ve done all your research.

I can’t wait to see some of these on Pgh streets! I might get one but I think a boneshaker is next on my list.

Madsens look nice, and they’re not insanely expensive. They’ll ship it to your house. And you can carry 4 creepy little Aryan clone kids with your impossibly Aryan wife. In serious though, I’ve read good things about Madsens.

My friend Patrick has reviewed a few cargo trikes, including the Christiania & Nihola… 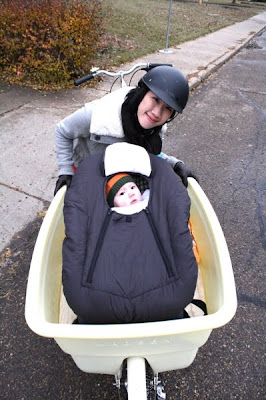 This woman up in Edmondton seems to get a lot done with hers.

There’s something about the sound of that city I like.

Those Madsen’s are intriguing. I’m going to have to look into them.

I had the chance to throw a leg over an Ahearne Cycletruck recently, and would really, really like to give the much less expensive but similar Civia Halsted a try. Not sure if it will work for what you’re looking to do, but interesting to look at either way.

Edmonds – I’m going to take your point to heart about not letting the lack of a dealer keep me from ordering a bike from elsewhere. That said, I still would like to see some of these in person. A trip to Portland would certainly solve that problem!

Brad – I have been eyeing the Civia Bryant as a one day replacement for my singlespeed. But that is many days and dollars away. The Halsted looks really cool, but I think I need something with more carrying capacity.

I found this post on Urban Velo, from 2009, about a company that was going to make cargo bikes locally. Sadly, it looks like nothing ever came of it.

Chris just made himself a sweet trike that is very much like the boxcycle. You should stop by thick and check it out. Willie used it to move some of the heavier stuff when he and his girlfriend moved by bike from friendship to Lawrenceville last month.

Been riding a Cycle Truck for a while, and it is awesome, but yeah, probably not enough capacity for you, widepipe. Bakfiets-style seems the way to go.

Brad – tried the Halsted, it’s not the same. They need to tweak the geometry some more (which it sounds like they are going to do).

I have to check out the Thick trike. I’ll try to head down there in the next few days.