PITTSBURGH —An emergency response is in progress at Giant Eagle in Greenfield, where a car somehow ended up on the grocery store’s roof Tuesday morning.

Presumably somebody was coming down Morrow and didn’t stop. https://goo.gl/maps/hc4GAyYoKoH2

If you just keep going straight after the stop sign at the end of Melbourne, well…

An oldie but a goodie: "Weirdest thing I ever saw, and I was in Vietnam and saw some weird things" – eyewitness to Giant Eagle crash #wpxi pic.twitter.com/rj11s3sqPL

(And, actually, looking at that picture, it looks to me more like they missed the turn coming down Greenfield where it meets Windsor, but I’m not sure how much that matters…)

Turns out the Giant Eagle dude didn’t have a license, nor does he own the vehicle that he drove onto the GE’s roof:

The story was so light-hearted about the whole thing. “I was just telling my wife we were about due!” “He’ll be identified if the police find out he broke any laws.”

This woman’s car flew out of a parking lot, jumped a curb and ended up stuck in a tree — all without anyone driving it, apparently, though somehow someone referred to as the driver ended up in a tree: http://www.post-gazette.com/local/city/2016/03/15/Woman-car-winds-up-in-tree-after-foot-gets-stuck-on-gas-pedal/stories/201603150163

From the photo – the car crossed over the bike trail before hitting the tree. Sarcasm aside, this could have been much worse.

My coworker was waking there at the time of event had happened. So soon as I get home I will post two pictures be took. The officer “pulled up near the bicyclist and called him out by name, told him to stop, and the bicyclist took off,” Lamoureux said.
A chase ensued into the semi-circular driveway of the Windsor Square Retirement Community at 9912 48th Drive NE. The chase lasted “less than a block,” Lamoureux said.
A second officer heard the commotion and also drove into the driveway to catch the bicyclist. He couldn’t stop his patrol car in time and crashed into an apartment.
“His vehicle didn’t stop and it slid into the building,” Lamoureux said. “At the same time his vehicle hit the building, the bicyclist hit the back of his patrol car … He kept pedaling right into the back of the patrol car.”
The investigation by collision detectives will look into the possibility that a mechanical problem with the police car contributed to the crash, Lamoureux said. He declined to specify what kind of problem is suspected.
“The equipment failure is still being looked into,” he said. “This will include a mechanical inspection.”

Towson, MD
“March 14, 2016: An Audi Q5 SUV falls off of the fourth floor of a garage on Allegheny Avenue in Towson. The driver was not seriously injured. More information is available on our news blog: http://ow.ly/ZRnf1”

Not exactly a building, but the traffic signal pole on SB 40th at Butler (across 40th from GetGo) appears to have been run into by something recently…

Not in Pittsburgh, but this belongs on this thread, not the out-of-town one.

Geneseo, NY: A truck has clobbered the fountain in the center of town, toppling the 100-year-old bear on the pedestal. Tens of millions of cars have passed this fountain and managed not to damage it. Not anymore.

I went to undergrad here. The only other time the bear has been off the fountain in my 40-year knowledge of the town was the night of the 1980 Olympics when we won the USSR hockey game, and then it was crazed and drunken students who pulled it down, not a car hitting it.

I’m sure a good many of those tens of millions of cars who drove past it were piloted by drunken teenagers (yeah, the drinking age was 18 when I was there), and somehow we managed not to kill the fountain.

So we’re all now wondering, just how?

A couple more posts, as news filters in on Facebook.
Apparently it was a truck.

OK, this thread is acting weird. This post I made from this morning is missing…

I thought this belonged in this thread:

So about a thousand drivers/passengers were killed in the state last year without any help from another vehicle.

Car thru front window of Wiggy’s Restaurant, Noblestown Rd near Poplar, in Oakwood. Driver hit accelerator instead of brake? Flying glass cut a diner and sent him to the hospital. http://triblive.com/news/adminpage/10281084-74/restaurant-meyer-front 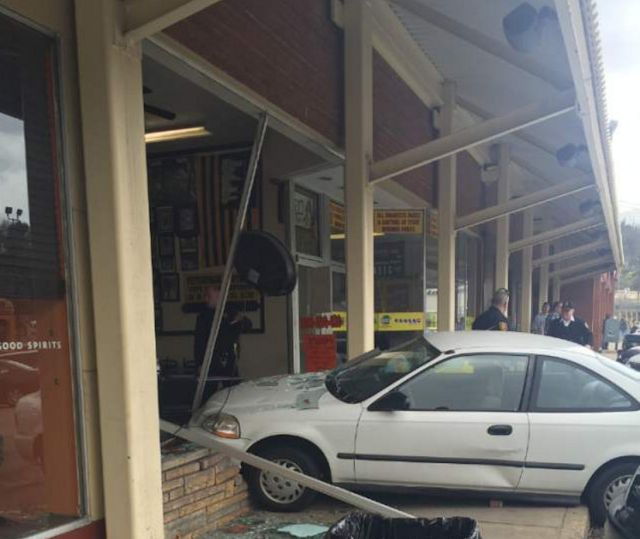 In November, a van crashed through the front of Mineo’s Pizza, three doors down, sending two to the hospital: http://pittsburgh.cbslocal.com/2015/11/15/vehicle-crashes-through-mineos-pizza-in-oakwood/

HOPEWELL TOWNSHIP, Pa. —
One person was taken to a hospital Tuesday after a waste management truck rolled into a house in Hopewell Township, according to officials.
The house in the 1400 block of Western Avenue was knocked off its foundation by the truck, which rolled down a hill, officials said.

Officials say a 90-year-old woman thought she had her vehicle in drive when it was actually in neutral.

From a few days ago, one of those pesky self-driving vehicles hit a gas pump in McKees Rocks, setting two cars on fire:

The article does later clarify that someone was indeed driving the vehicle.

That would be here.

“Witness Ahmid Alford told Bofta Yimam that the driver of the truck “was crying, saying he just bought the truck.” Alford added, “[it’s a] dangerous house,” saying it’s the sixth time in his memory that cars have crashed into that spot of Larimer Avenue. Or, you know, it’s dangerous driving.” — Eat That, Read This.

Driver mixes up brake and gas pedals, crashes into post office in Richland:

PG Mount Washington story has a byline (Karen Kane), refers to the crash as an “incident”.

PG Wilkins Twp story has no byline (just “Post Gazette”), refers to the crash as an “accident”.

PG April 22 story about the school bus also has no byline, but refers to it as a “crash”.

So, we’re making progress in not automatically calling them “accidents”. We’re nowhere near done, though.

The aquarium crash was one of three over the weekend, summarized in this KDKA story.

Garbage truck rolls backwards into house when operator forgot to put on the brake.

A church in Millvale failed to jump out of the way.
http://www.wpxi.com/news/car-crashes-into-millvale-church-causing-minor-damage/397145102

Ok, this one’s a little odd:

Stay with me here….

Baldwin Borough police are investigating a potential marijuana grow operation at a home on Churchview Avenue.

The investigation began when a car crashed into the house in the 3200 block of Churchview at 1:10 a.m. today.

“We went to check on the occupants and found what appears to be a grow operation” inside the house, said Detective Tony Cortazzo.

He said no one was hurt in the crash and the damage to the home was not significant.

He declined to identify the occupants of the house because no charges have been filed and the investigation is continuing.

BTW, the Baldwin Police station is a block further up the street.

Second-order collision: A semi rolled over this morning on the Glenwood Bridge. A large metal coil in turn rolled off the truck “…and smashed into a nearby home. The owner of the home had to evacuate because of concerns about foundation damage.”

No word on why the truck rolled over, but having been on the Glenwood I’ve got a guess or two…

Well, the speed limit there is 25 mph, so it can’t be because the truck was going too fast and couldn’t make a turn.

“Neighbors believe the driver accidentally ran through a stop sign and hit a car traveling through the intersection. The driver then hit a parked truck and wound up next to the home.”
(emphasis added)