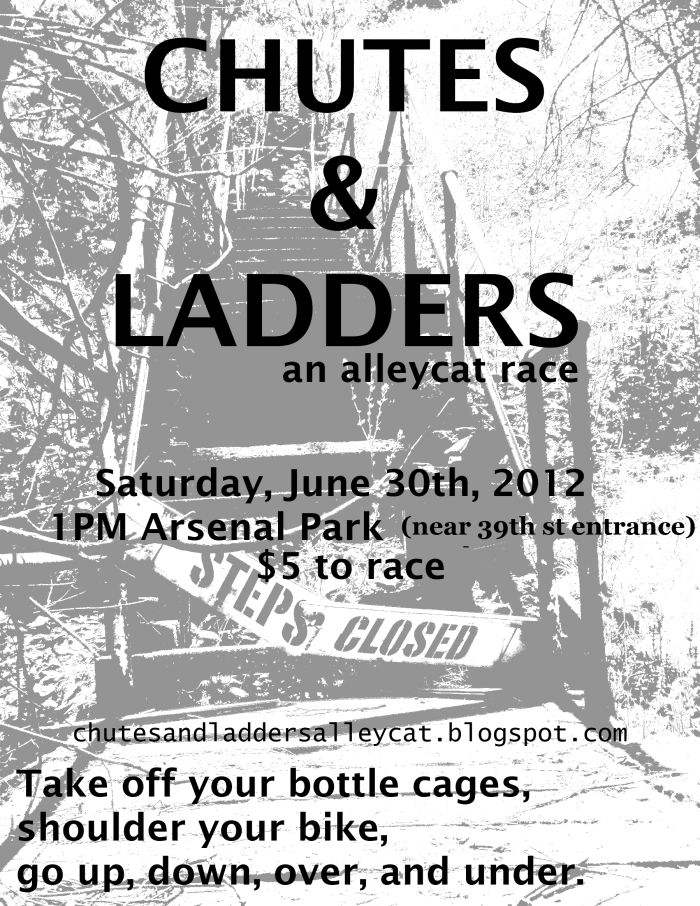 Meet in Arsenal Park, by the 40th st entrance

Q:Will I have to walk up stairs?

Q:Will I have to carry my bike up stairs?

Q: Can I just climb the stairs, go back down, and get back on my bike?

A: NO, you’ll have to climb or descend any stairs with your bike.

Q: Can I ride my bike down stairs?

A: NO, you may be confident in your ability to do that, but other people are going to be on the stairs.

Q: Will there be fabulous prizes for the winner?

A: No, this is for fun, but there might be something interesting for the winners / participants.

More details on the blog…

i’ve never ridden an alleycat race. but i DO pride myself in my graceful ability to haul my bike up and down steps. do non-competitive wussies ever show up for these things or would i be the only one eating everyone’s dust?

Oh, this looks like fun. I love staircases. Too bad I have a family commitment.

Not to be a Debbie Downer here, but if you collect money for an event, you’ve pretty much thrown any possibility of waiving your liabilities out the window. You can write up the most complex, overarching waiver you can think of and a judge will throw it out because you assumed responsibility when you collected money for it.

If some kid gets killed or injured, or kills someone else, you can be held liable. Unless you find someone to insure you, I wouldn’t have the liability of an alleycat race on my personal estate. Just some food for thought.

I’m just saying, if you nix the fee requirement, you can claim plausible deniability when someone tries to sue the event organizer. I understand you’re just trying to start a fun event for you and your friends, but be smart about it.

And don’t do drugs.

..and probably realize the worth of internet forum legal advice.

For anyone who cares, here’s my 2 cents (I will admit its not even worth that much – don’t be a cheapskate if you want GOOD legal advice…pay an attorney sucka….): PA does allow for the ‘assumption of risk’ defense. Basically, participants assume the risk for hazards that are obvious and inherent in the activity, such that there is no reasonable way the participant could not have known about and understood them. Example: the fact that you might fall and hurt yourself is an inherent risk in downhill skiing, so you cannot go after the ski area because you fell and got hurt. If you somehow got hurt because the ski area failed to properly maintain the ski lift, then you could win as a plaintiff because broken lifts are not inherent to the activity of skiing. The problem with an alleycat like this that a judge or jury is going to have a hard time understanding exactly what the “inherent risks” are for an event such as this one. It seems to me that you are at the mercy of their interpretations along those lines, and the stranger and less well understood the event is, the bigger the chances you could be held liable.

Again, just my two cents. I am not a lawyer…duh.

PA does allow for the ‘assumption of risk’ defense.

Yep, so does California, and this widow weaseled a $4.5MM settlement:

And I bet their waiver is pages longer than anything any of us would ever dream up.

Anyways, I have no dog in the fight. Do as you will.

Yeah, should the chump who got to try out a supercar on a race track have understood that he didn’t have the skills to match his ego? Apparently the jury didn’t think he should have. What do juries know about the handling characteristics of supercars? And how the heck is a defense lawyer going to be able to educate them as to what should be reasonably understood and appreciated along those lines by Mr. Chump in the course of a trial? Big big task, I’d think. Seems the more obscure the scenario, the goofier the verdict can be.

I’m pretty sure that’s covered in the waiver.

There’s also signs posted all over similar to this: Anyways, the courts found not only the driver liable, but the event organizers and the manufacturer of the car. REALLY?!

I’m suing the manufacturer of my bike if I ever crash for making my bicycle too awesome.

This is tomorrow, but there is a new Start Location!

We are going to move the start location from arsenal park to under the 40th st bridge due to the 4th of July festival happening at the park. I’ll have someone at Arsenal to direct people to the new meetup spot in case they don’t know about the new spot.

Here’s a google map link if you really need it. You probably don’t.

I don’t know about this, guys. The race starts at the hottest part of the day, the temperature’s supposed to hit 99 degrees, and really the only saving grace might be a thunderstorm, which comes with its own risks.

Best wishes for everyone’s safety, but I wouldn’t want to be the person in charge of this and decide to take the risk of running it despite the weather.

So, did this happen? How did it go? Was out of town so missed out

Had a small turnout so we turned it in to a fast group ride and did the whole route together since it was set up as an in-order race. I posted some pictures to the blog . It was a good time, hit some interesting spots and took a couple diversions off the route including a trip to the fountain at PPG plaza to cool down.