COAST: a scavenger hunt & thank you party for Bike Pittsburgh! 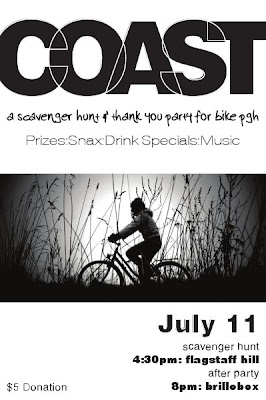 4:30 Meet at Flagstaff Hill for the Scavenger Hunt manifesto!

8:00pm After party at brillobox

$5 Donation all proceeds to Bike Pittsburgh!

Points awarded for scavenger hunt items at the party! Can’t ride? Use any mode of transportation and points will be awarded appropriately! Or, just come to the after party!

In light of recent bike-related violence and before Bikefest begins, we would like to have a party that thanks Bike Pittsburgh for all the great things they have done for the community in the past several years: making streets safer for cyclists and pedestrians, giving us outlets to vent our frustration and sound the alert to bike-related violence, and really creating and expanding the bicycling community over the past 7+ years. Join us in saying thanks and having fun!

JUST FYI – There is a big Pittsburgh Parks Conservancy event that day in Schenley Plaza. You might want to come early to share in that fun, or factor in the possibility of crowds and delays into your overall transportation and event planning efforts.

From the PPC – Over the past four years, Schenley Plaza has evolved into a destination for live music, great kids’ entertainment, beautiful horticulture, and big events. And now the Plaza is getting ready to welcome its one millionth visitor!

On Sunday, July 11 from 2:00 – 5:00pm, we’ll be hosting a free celebration, and YOU could be our millionth visitor! In addition to prizes like a personalized brick at the Plaza, a Dean beginner guitar package from Backstage Guitars, Pittsburgh Pirates tickets, and a lifetime membership to the Parks Conservancy, we’ll have lots of fun activities for the whole family. The Black and Gold City Goes Green will also be on hand accepting pledges to conserve one million gallons of water.

yah i just saw that parks email. but this is just in the plaza, and our meeting place is at the hill. however people should totally go to this.. maybe there is some way i can include a scavenger hunt item into it

can we have partners? i’d love to do it but i don’t think i know as much about the city without the use of google/cell phone/internet

yes! you can definitely be a team. we want everyone who participates to have fun, primarily. we do have prizes. they will also be fun.

hence the name of the event. it is one of the most fun things to do on a bike! it’s like a reward!

What about the new and improved 2010 Pittsburgh Bike Map?

The bike map doesn’t have where to find local 2c candy on it!

But it sure would come in handy helping find a way to get there!

ooooo i think i know where 2c candy is!

this will be fun!

Wait….is this a team event or a solo event? If people are teaming up, won’t the singles be at a disadvantage?????

its really up to you. you can team. you can solo. its a fun ride and not a race. i think both options have their advantages. justin & i really didnt consider making any rules for it regarding this, because we want it to be open to people who have never done a bike scavenger hunt or alley cat style event before. if folks are more comfortable with a friend, I say go for it. We can adjust points for that if it is a real concern… ie, add so many points if you did the hunt alone. sound good?

can you wait an hour for my picture to develop?

No big deal on the team v. solo event. I was momentarily panicked by the realization that I might need to find a team at the last minute.

we have a lot of different ways we can do it.

we will have prizes for team win and for solo win, and various other prizes for wins.

FANCY PRIZES! WE HAVE THEM FOR YOU! FROM!

Kraynik’s–more things you need and love!

other amazing goodies that we have picked out JUST FOR YOU

No Kraynicks bc I got too busy and couldn’t stop by. But lots of other great stuff. Plus I handmade some shirts

is anyone else doing this?

I will probably be checking this out.

i will try to be there – i found out sort of last minute i have a gig from 2-4 in effin’ heidelberg/carnegie. uggh

Here’s my sonnet. I tweaked it a little from the version as performed at the party tonight.

One hundred years ago “fast foot” did join the scene

(Velocipede in French–but you knew that)

It burns no oil, just our body fat.

It needs no freeway, just a simple lane.

Its speeds are low–and that you can be sure.

For modal mix you take it on a train.

And budget-friendly on both rich and poor.

For bicycles, then, be evang’lists all

For fun, for transport, and for fitness ride

Not just in summer, but spring, winter, fall:

In every season, take your bike outside.

That glorious beauty: Pittsburgh on a bike!

so what were some of the scavenger hunt items? i missed the hunt, hit the party for about 30 seconds and was on my way..

sounds like this was way more fun than what i did today. i spent the day digging post holes in the rockiest dirt i have ever worked in. pratt has some sweet photos of the work we did on our 9-10 hour work day on the north park freeride trails.

i couldn’t make it out. kinda bummed, but i wasn’t exactly feeling well. hope it was a good time!

twas fun. totally gave me a great excuse to get out of my house and ride bikes with friends on a beautiful day

the world cup unexpectedly (and sneakily) stole this out of my schedule… i didn’t even realize that it was so late till it was too late… why wait until the last minute to score! amateurs.

we actually had a delay of hunt due to world cup. but only 3 people were delayed due to that.

thanks for riding, friends!