Commuter Cycling Up Nationally in a Big Way, per USAToday

“In recent years, many communities have taken steps to support more transportation options, such as bicycling and walking,” said Brian McKenzie, a Census Bureau sociologist and author of the report. “For example, many cities have invested in bike share programs, bike lanes and more pedestrian-friendly streets.”

The Census Bureau’s new report, “Modes Less Traveled – Bicycling and Walking to Work in the United States: 2008-2012,” is the first to focus only on biking and walking to work.

Rebecca Serna, executive director of the Atlanta Bicycle Coalition, says that biking is increasing in popularity because of work by groups such as the Alliance for Biking and Walking to increase biking capacity – such as bike lanes – around the country.

“The grassroots part of the biking movement is especially significant,” she says. “People start riding a little bit, then a lot and they become natural proselytizers.”

One growing trend among bicycle commuters emphasizes the social aspect of biking. That is bike trains, in which groups of bikers set up a commute route, much like a carpool or a train, and join each other every workday for the ride to the job.

Walking to work is more popular than it was, but has not seen the same explosive growth as hopping the two-wheeler to work. After steadily decreasing since 1980, the percentage of people who walk to work has stabilized since 2000. In 1980, 5.6% of workers walked to work; that declined to 2.9% by 2000. However, in the years 2008-2012, the rate of walkers remained statistically unchanged.

Among large cities, Boston had the highest rate of walking to work at 15.1%.

Here’s the full report from the census department.

My conclusions from the data:

Women walk to work as frequently as men, but bike 1/3 as frequently as men.
Blacks bike half as much as other races (no such difference for walking).
Poor people walk and bike at much higher rates than the rich.
Biking and walking is 2-3 times as common among the young as among the old.
The distribution with education is U-shaped: bicycling is 2-3 times as common among those at the top (with graduate degrees) and those at the bottom (lacking a high school diploma) compared to those in the middle (with just a high school diploma).
Average commute times for walkers are 12 minutes, 20 for cyclists and 26 for all others who did not work at home (drivers and public transit users).

It’s interesting how walking is declining, and cycling was declining, but has started to rebound: 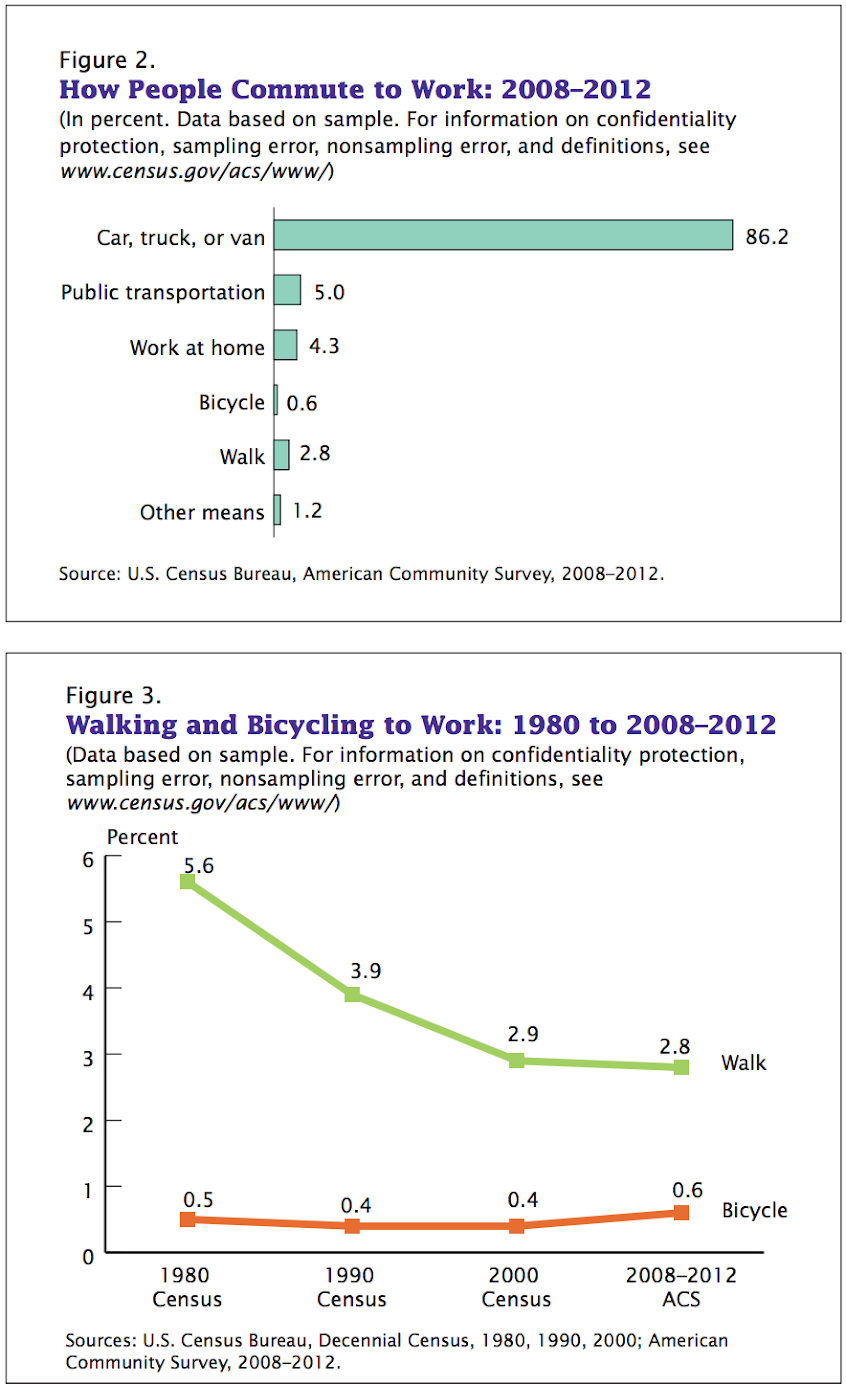