I was on the G2 bus yesterday. There are “Share the road” signs along the stretch between the Parkway exit and the West Busway.

We know. They’re meaningless, even counterproductive.

@stu, Why don’t they remove them and install [Bike Symbol] May use full lane signs and sharrows. Better yet, widen the sidewalk and mark as shared use.

This is too difficult to cover in a response here. We have a couple of threads where we discussed it at length. I’ll see if I can dig them up and repost links.
Short answer, no, changing signage isn’t going to fix it.

OK none of my images will work.

The cycling community wanted a real bike lane but got only a road with fast car traffic and ineffectual “share the road” signs, plus a sidewalk. The sidewalk was pretty nice, as sidewalks go, when new, but things have deteriorated due to poor maintenance. I filed this complaint at http://www.dot.state.pa.us/penndot/districts/district11/d11ccc.nsf (It could be that this sidewalk is Pittsburgh city responsibility, not PennDOT; maybe I’ll find out).

Japanese knotweed is blocking the sidewalk of West Carson St (Route 51) between the West End Bridge and McKees Rocks. Only about 1 foot of the sidewalk is clear, in places, because of the failure to prune the knotweed growth.

Recall that cyclists requested that a bike lane be built along here, but PennDOT failed to do so, and cyclist Dennis Flanagan was killed along this stretch of road in 2016 just weeks after the “improved” road opened (he was probably killed while crossing the road at the crosswalk). http://triblive.com/news/allegheny/11062874-74/west-carson-penndot. There is now a sidewalk along one side of the road, only.

The spot in the picture is on West Carson near Glen Mawr St, looking northwest. While I biked the sidewalk on 6/22, I passed several pedestrians. 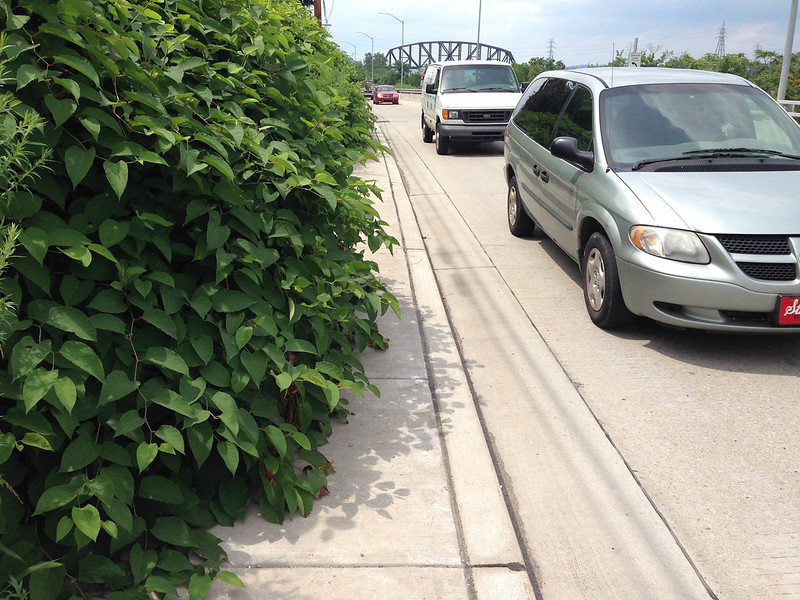 You should be mowing this knotweed monthly, from April to September, to keep the sidewalk usable by pedestrians and cyclists. Please mow it ASAP and restore its full width.

(FWIW, County real-estate website is pretty slow at the moment, but a couple semirandomly selected properties on Carson west of Glen Mawr are City or Port Authority-owned…)

I just 311-ed the knotweed problem, so now the City is notified about it, in addition to PennDOT.

A search tells me that we had people complaining here on this messageboard in 2014 about knotweed encroachment on the old sidewalk before PennDOT rebuilt it.

Nothing is certain but death, taxes, knotweed, and poor maintenance.

If you haven’t been on West Carson in a while, signs showing your speed were erected on both sides of the road near the Busway entrance. The signs have flashing red and blue lights that mimic a police cruiser’s. The lights are activated if you pass the sign going over 35 mph.

How sad is it that all of us predicted this? I’m not a civil engineer or a transportation specialist. I’m just a guy who likes to ride his bike and has some sense of traffic flow. When I saw the plans, I thought they spelled trouble. And then the road opened up and my fears were quickly confirmed. It might as well be a highway.

Although in all reality they probably have a hotkey shortcut for that, so it took someone 0.33 seconds to send that reply.

Is it too much to ask if the peds/bike coordinator for the city to tackle this turf war issue?

Also, what about getting tv involved?  They’ll love the someone died and will die again lede. And it may get something done about it.

I haven’t heard from PennDOT yet. They responded pretty quickly on the McKees Rocks bridge sign issue, so I’m hopeful that they’ll respond soon on this West Carson sidewalk issue. If they say “it’s not us, it’s the City” then we’ll have a case for TV people.

Happened to be approaching this area, from Neville Island, on July 4th and decided not to ride it.  I probably would have attempted it, had I not seen the photo with the overgrown knotweed.  Thank-you!

Instead, I opted for the McKees Rocks Bridge (on the sidewalk), crossed 65 and took a right on California Avenue.  From there, a left on Antrim, right on McClure, and got on the North Shore Trail behind Western Pen.  An inconvenience but better than potentially becoming a statistic.

It is amazing that, even after all that has happened, the sidewalks are not maintained and the buck is passed by the various agencies one would believe bear some responsibility.  What a tired and lame excuse we have in this region for sidewalk maintenance policy.  The sidewalks are collectively a disgrace and nobody is ever held to any level of responsibility, or so it seems.

Regarding an earlier comment, the proper order of things around here is, taxes, knotweed, then death.

….since 1891, Pennsylvania has authorized municipalities to foist responsibility for sidewalks onto property owners. Obviously, enforcement, when it leads to a result, is spotty.
Weed-choked patchworks of concrete and rubble denigrate us all. To say “it’s not my problem” is to be in denial, whether you’re a property owner or a city official.

So what are the solutions? The current method is for the public to call 311 to officially decry conditions. It’s good to have 311, but it’s hardly proactive.

Throughout the country, sidewalks are commonly the adjacent property owner’s responsibility, but there are creative ways to deal with the realities of citation after citation without response, lien after lien that just adds to someone’s eventual burden — maybe even the city’s.

Except in my case, on Delafield between the route 28 overpass and the intersection a block away with Valley and E. Waldheim.  There are several foot craters in the asphalt sidewalk.  O’Hara Township says that even though the sidewalk is in their township neither the township nor the homeowners are responsible.  Delafield is a county road, so the county is responsible for the sidewalk.

Repeated calls to the county and our county councilperson has elicited crickets.

I know this is a bit off topic, but any advice for connecting with the county/figuring out the law?  I think that O’Hara is wrong…

News today regarding the knotweed obstructing the sidewalk of West Carson St between the West End Circle and McKees Rocks. First a review:

They contradict themselves somewhat when they follow “That’s the city’s job” with “we’ll be spraying there next month”!

Recall the saga regarding the crumbling sidewalk of Fort Pitt Bridge near the fort, in 2015. (see http://www.bikepgh.org/message-board/topic/have-you-made-your-311-complaint-this-week/page/16/#post-314594). Pittsburgh said “it’s PennDOT’s problem”, PennDOT said “it’s Pittsburgh’s problem”. Then someone suggested we contact DCNR (state park people) and they patched the sidewalk, I guess because they’re the adjacent landowner, or maybe they’re less practiced at passing the buck.

What should we do now, with West Carson St and the knotweed? I’ll let the city know that PennDOT passed the buck to them, and vice versa, but I’d be surprised if anything comes of that.

Ride with a machete and throw the cut roughage into the road to make it someone else problem.

For now, I suggest we not machete the knotweed there. I think we should try to get “the authorities” to fix it. If citizens start to maintain the sidewalk, that might prompt the city and/or PennDOT to back off their responsibilities.

I just sent a request to KDKA TV to investigate it. http://pittsburgh.cbslocal.com/about-us/contact-us/ . I haven’t watched local TV in years. Is one better than the others, or are they all about the same?

I biked the West Carson St sidewalk between West End Bridge and McKees Rocks again. The knotweed encroachment is worse than before, and there are other plant species encroaching, also. Interestingly, the one place that the plants have recently been sprayed and cut is a stretch of about 60 feet surrounding two billboards. Because everyone knows billboard visibility is more important than pedestrian or cyclist travel! 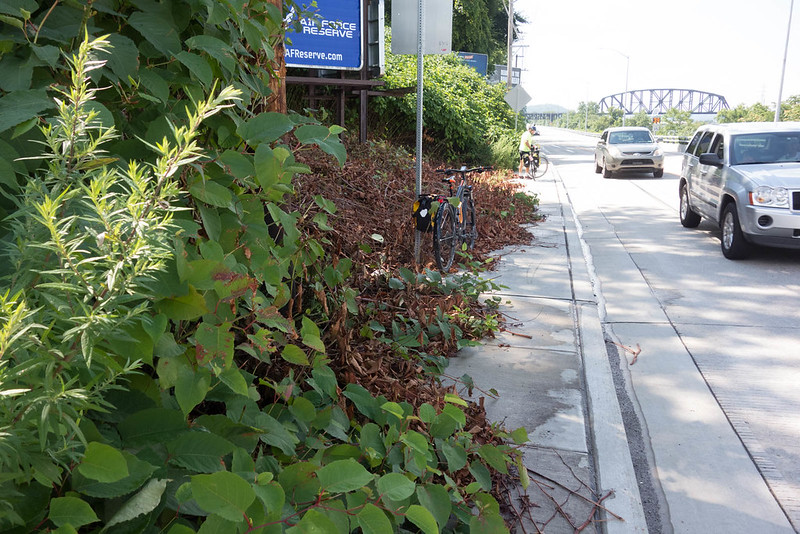 The billboard company maintains that.

So the solution is more billboards.

Or maybe fertilizer. Once it encroaches into the street, I bet Penn dot will cut it back, clearing the sidewalk

Put up some temporary fence and throw some goats at the problem.

An update on the West Carson St knotweed. I emailed both PennDOT and Pittsburgh that each entity says this sidewalk is the other entity’s responsibility. In response I got a nice phone message from Phil Mannarelli of PennDOT saying (similar to before) “The knotweed on West Carson St is the responsibility of the city of Pittsburgh. Talk to Lisa Ceoffe in Public Works Dept.”

I’ve called Ceoffe’s office (Forestry department) three times, leaving messages, but never able to talk to her and never receiving a return call. I never got a nibble from KDKA, so apparently they didn’t consider the story juicy enough. Maybe we need a knotweed-related death to get their attention.

Did you try Councilwoman Kail-Smith’s office?  sometimes it takes a politico to figure out bureaucratic hot potato