BIG BEAVER BORO (KDKA) — A teenager has died after being struck by a vehicle in Big Beaver on Monday afternoon.

The accident happened around 4:30 p.m. in the 7600 block of Big Beaver Boulevard at the intersection with Old Wampum Road.

According to state police, the bicyclist was trying to cross State Route 18 when he was hit.

Beaver County emergency dispatchers say a male bicyclist was hit by a red SUV and transported to Ellwood City Hospital. He was flown to UPMC Presbyterian Hospital where he died from his injuries.

The SUV had a smashed windshield following the accident.

Neighbors say the victim is a 17-year-old about to graduate from high school.
The driver of the SUV was not hurt.

Here’s the intersection where the kid was killed. I can’t see a reason in hell that the driver could not have seen him. Clear sight lines, flat road.

50mph speed limit on Route 18 (Big Beaver Blvd) there. This is right next to the Pittsburgh International Race Complex, which can be heard for miles around when racing is underway. 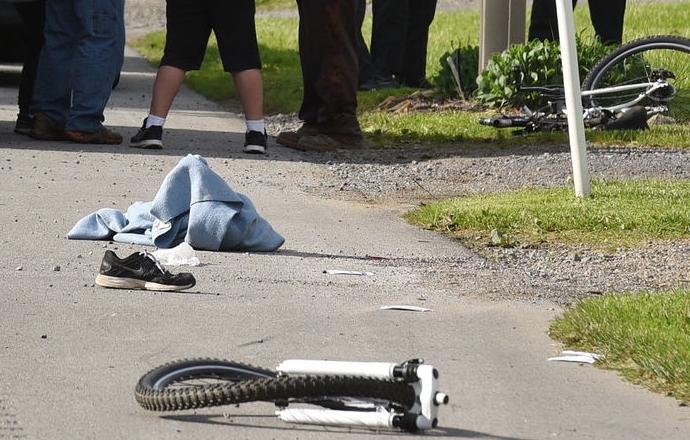 The updated story says the cyclist’s name was Jordan Bobin.

I can’t see a reason in hell that the driver could not have seen him.

It sounds like the cyclist may have been coming from Wampum Road. If so, he’d have had a stop sign, while the driver on Big Beaver Blvd didn’t. Perhaps the bigger issue then is whether the cyclist saw the car approaching, before he tried to cross the 50 mph road, not just whether the driver saw him?

I added my thoughts to the Beaver County Times article, http://www.timesonline.com/news/local_news/cyclist-dies-after-being-hit-by-suv-in-big-beaver/article_0d45b3e2-3f49-11e7-b4df-5b0698688b9f.html:

A best guess at what happened based on these pictures and Google Streetview: The two sections of bike are on the east shoulder of Route 18 or on the grass east of the road. The smashed up car is mostly on the east shoulder, to the right of the northbound lane. Assuming the bike and car haven’t been moved since they came to a stop, it appears we had a car northbound on route 18 that was probably not in its lane but was driving at high speed (possibly speeding) at least partially on the right shoulder, where a cyclist was pedaling (probably also northbound on 18). The car rear-ended the cyclist, causing the right half of the windshield to fracture and hurling the boy and the rear 2/3 of the bike through the air and off the road. The bike broke at the front fork and the front wheel of the bike went under the car as it slowed to a stop, causing the front wheel to be bent (“tacoed”). So the evidence is consistent with a rear-end collision by a car not in its lane.

I’m curious why the article says “was struck by a vehicle as he tried to cross State Route 18”. Is there evidence for that? Maybe the driver of the car should be charged?

^my guess is the reporter (or cop) sees a crash located near an intersection and simply deduces that someone was crossing.  Hopefully a certified crash investigator can determine what really happened & whether charges should be filed.

My sympathies go out to his family.  It’s such a tragedy regardless of what happened.