"Did you ride your bike? You're crazy"

Pierce wrote:… the fucking coop of all places, has their upperlevel bike rack plowed in with snow. So the people driving their subarus over from Park Place and Sq Hill have a pristine parking lot …

I drive a VW, I’ll have you know. Subarus are low class.

This thread kinda went off the rails so it’s as good a place as any to tie up my reaction to a few similarly compromised threads. Dear Pierce, my choosing to live in Garfield and donate $250 to Kevin Sousa’s kickstarter is indeed a pointed attack on your person. Please find solace in it justifying your approach to human interaction. And revel smugly at the fact that I am not a big enough person to keep my keyboard shut.

I imagine Kevin’s primary clientele is smug jackasses, so you’ll fit right in

Whoever is in charge of the building has been a great asset to the community so far. They haven’t shoveled their sidewalk all winter

It’s funny you post in this thread, which is essentially about people commenting on things in which they have no experience and little knowledge. I.E. “You’re crazy for doing X.”

This summer if you recall, you said that “veganism was extreme,” during a break on the pool ride and I sarcastically joked that “Yeah, I just ordered this burrito without cheese or sour cream. EXTREME!”

But yeah, torturing other animals for no reason, continuing to pollute the environment for no reason, letting other humans starve so we can eat whatever crap Kevin makes (we feed more grain to animals we consume than we do to humans), that’s not extreme. Just like driving a few miles to work everyday and essentially doing the same thing is not crazy.

I’ve had a very minor cold the last day and a half. My co-worker was quick to point out that it’s no wonder I have a cold with all my bike riding in the cold. I guess she forgot the several colds she’s already had and she drives an SUV to work everyday.

Like Pierce, I’ve gotten sick this winter, albeit only once and mildly. Last winter I had two. Before I started biking I averaged 4 or 5 colds a winter.

Like Pierce, I’ve gotten sick this winter, albeit only once and mildly. Last winter I had two. Before I started biking I averaged 4 or 5 colds a winter.

Agreed. I’ve been doing little cycling this winter, and have had several colds since December, including a real award-winner now. Normally, I have one cold every year or two.

It’s funny that people still think colds are caused by being out in the cold, having not heard of Pasteur’s Germ Theory of Disease.

On topic link. Nothing surprising, but maybe a nice thing to share to someone who thinks you’re crazy:

It was 32F, but it was Valentine’s Day, and the bikes wanted to be taken for a ride to Whole Foods! 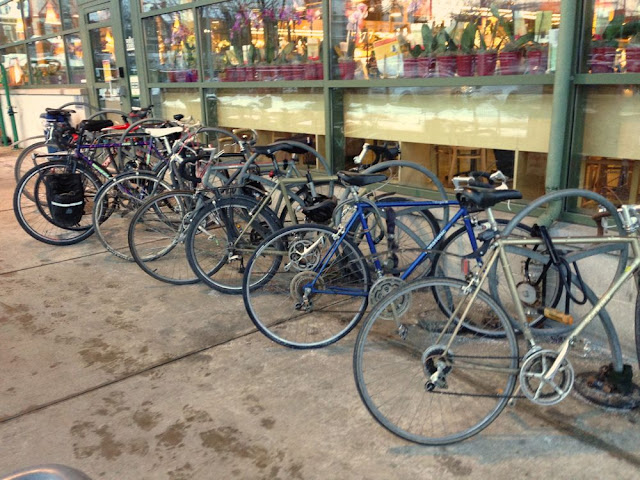