I parked at the Eliza Furnace Trail Parking Lot off of 2nd Avenue on Sunday, Jan 4 in the afternoon. Went for a nice ride to the jail and back. When I got back I found my car window smashed and the contents of my vehicle gone through. There was a pickup truck also broken into at the same time.

Has anyone had any similar problems? And if so, what time of day and which day of the week. I’d like to continue to park there.

Saturday December 27th there was glass next to at least 4 parking spaces. I was down there at 10AM

I mentioned this on another thread but I guess this one is appropriate for repeating. I was down there early on a Sunday afternoon probably around 1. It was probably late October or November (about the time that it was getting cold enough to discourage most casual riders) and there were police there taking reports from at least one vehicle. (There was another in the lot but it didn’t appear to have been touched.)

In 2005 and 2006, a number of cars in the Eliza Furnace lot were vandalized with grease under the door handles. It turned out to have been the disgruntled owner of the neighboring lot who was still upset about this piece of property being used for free by commuters when he should have been making money off of it.

Saying this should in no was be suggesting that he is in any way responsible for this string of break-ins but I bring it up in the method in which he was caught.

I purchased a digital sport camera, disguised it as a piece of garbage and bolted it to a nearby fence. The motion sensor took plenty of pictures of people walking or biking by, birds, changing shadows, and such until, after two months, I got a picture of Mr. DePasquale in the act of vandalizing my car. 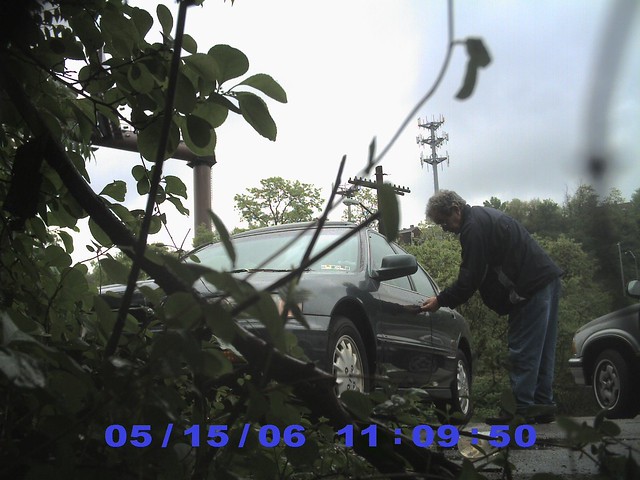 So, I’m going to get my camera out again and set it up in the Eliza Furnace lost to see if I can gather evidence. It has a relatively short range on its sensor and I can’t get a high vantage to cover the entire lot properly so my best chance is to set up the camera at the lot entrance. At least this will get a picture of everyone as they enter the lot.

Any other suggestions would be appreciated.

While finding the grease vandal is admirable, I wonder what the legalese about a private citizen installing covert cameras on someone else’s property (city or otherwise) that indiscriminately take images of people under no suspicion going about their day.

I just know what I would do if I found some consumer motion sensor camera on me in a place it clearly shouldn’t be… And I’m wondering if the law wouldn’t actually be on my side.

To the best of my knowledge, there is no expectation of privacy in a public space. PennDOT has camera’s watching traffic, offices have cameras watching inside and out, ATM machines watch everyone walking by, not just those making transactions, TV news regularly shows footage of crowds and individuals as stock footage without issue. My unattended camera or even my standing there with a camera falls under the same protection.

Indeed, at no time during my journey through the legal system was my use of a hidden camera questioned in any way. Not by the desk officers when I informed them that I was going to get a camera, not by the reporting officer I provided the evidence to, not by the judge hearing the case and not even by the lawyer defending his family member/client.

There may be a slight concern over my hose-clamping my camera to a city-owned sign post but, again, there was no problem with this in my previous case and if someone does have an issue, I’ll be glad to talk to them about it. They could make the claim of abandoned property or use the same laws that restrict fliers on phone poles but that’s not very solid, especially when balanced against the inability of police to address a crime wave.

Google blurs faces before posting them. I don’t have any intention of posting any images unless I catch someone in the act of something. All the other images will only be kept as long as it takes me to determine that no cars were broken into that day and thus no evidence. I’ll be pulling the SD card every weekday on my way home from work. The unit will be locked so that, short a bolt cutter or a hammer, it will remain secure.

OK, so maybe it won’t remain secure. The hose clamp I used to bolt the camera to the post pulled the plastic bracket right off the back. I’ll have to open the thing up and mount a better bracket on it.

No crimes captured so far but saw two city trucks accessing the trail Monday afternoon. The pickup truck on the trail yesterday might have been collecting garbage but this morning the garbage bin that has been overturned for several weeks hasn’t been touched. I don’t know what the SUV was doing. Neither had a plow or a salt spreader and besides, all the snow on the trail had melted by then. 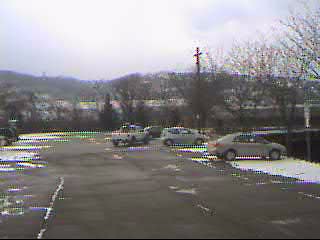 I’ve witnessed city trucks using the trail as a shortcut before so I’m always a bit suspicious. If the have a reason to be there then OK but uif they are just using it to avoid traffic on Second Avenue then they should keep off.

I don’t think one specific time is better than another. I see cars there as early as like 5:30ish AM when I go through there and as late as 10PM or 11PM with no problems. I think your car was just at the wrong place at the wrong time.