I went to the Engine House at Penn n Lang that the URA is selling. (Listed for 90K, in pretty good shape but needs a bunch of work to be anything else than what it is…)

the place was full of bikes in the basement! BEHOLD: 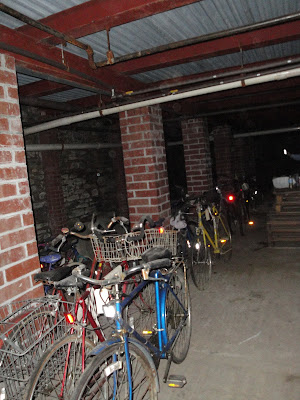 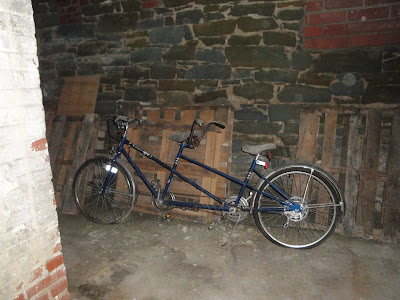 I wanted to take this stencil SO BAD 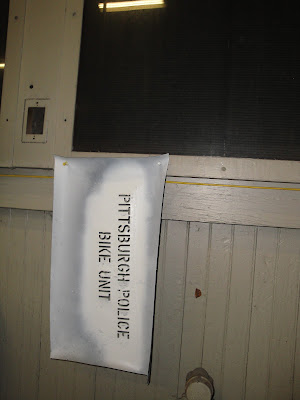 So what cops do you think rode around on that tandem? hee.

and, since they are amusing to me, I may as post these photos too:

(there were spent tazer cartridges all over the place) 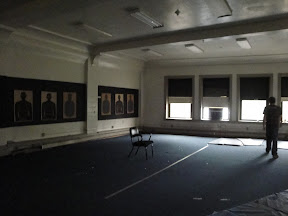 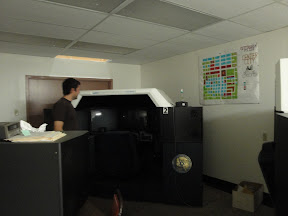 no more fire poles. who wants a firehouse without poles? 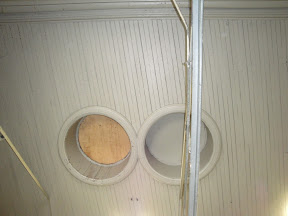 I’ve been eyeing up this property for years and always wondered if it would ever go up for sale. I was disappointed when I read the other day how it looks like they are pushing toward a development with the RFP. Unfortunately (as most developers do) they won’t do the property justice, instead just shoving in as many units as they can without a thought on how the space should be designed (See Otto Milk).

Sorry about the rant…now back to the bikes! Any idea on where the bikes came from or will be sent?

my coworker and i also always eyed up this property, so when we heard that you could see it (what if it were our dream office?!) we went. It was mostly architects, not developers, for sure. Which might be okay?

either way most of the original cool firehouse charm is gone because in the 80s the City turned it into a training academy. You will have to pull all the crap that they put into it out first of all, and start from scratch.

I guess it is zoned residential so it might just turn into some sort of live-work space or something. It turned out not to be our dream office (um, because we don’t have a few hundred thousand sitting around…)

honestly no firepoles killed it for us. that, and that we would need a truck bay, and the only entrance is on penn, an impossibility for pulling trucks in and out.

awe, MAN. The things I would buy if I didn’t have a mortgage. What a beautiful space. I’m quite convinced carving it into apartments for profit would result in an angel getting emphyzema or some other equally horrible such thing.

Reinstalling the fire poles is a moral imperative. Besides, at $2 a ride, it could pay for itself in record time. That would look awesome on an IRS form. Occupation – Fire Pole Ride Operator.

Thank you Caitlin, for feeding my imagination for the week. This will be fun

In order to have fire poles, you need firemen who can fit down the hole for the pole.

i guess all those bikes really ARE going to waste down in the basement.

I want that tandem. If anyone gets any info on those bikes, i would like to purchase it

I wonder how many of these are recovered/stolen bikes from, say, 1997.

I was also at the Firehouse today. I spoke to the rep from the URA and asked her about the bikes – she said she’d look into it, and I mentioned Free Ride.

I stopped by Free Ride today, but no one was there. If anyone can contact me I can pass along her contact information.

(My sense was, she seemed surprised about the bikes, but generally agreeable to them going to a good use.)

did you also talk to her about the drum set? ha.