Lowrider bicycles are a fad design of bicycles, inspired by the wheelie bikes of the 1960’s with very long wheelbases. They are built purely as an exercise in styling, with no real concern for riding qualities. Some of them, in fact, are not rideable, because the cranks are so close to the ground that the pedals cannot turn around. They commonly feature lots of chrome or gold plating, 72 spoke wheels, sometimes steering wheels instead of normal handlebars, and springer forks. These toy “bicycles” should not be confused with recumbents, which are real bicycles.

This is only a few edits away from seeming like a music review of her “singing.”

you should see the crap he wrote about downhill mtb. sheldon is far from an infallible font of cycling knowledge and wisdom, and much like mr peterson, people put far too much stock in his words.

I guess that would depend on how many pounds of swikorskis have been glued on.

much like mr peterson, people put far too much stock in his words.

Are you referring to Grant Petersen, or Kent Peterson?

As regards the lowriders, there’s been a fine example chained up outside one of the Carson St pawn shops with a For Sale sign…pretty spiff.

@ cburch not an obsession, it started as a joke on Facebook and took off from there. And a Flock Halloween/Ke$ha ride sounds sill-stupid-fun. And she rides a bike. 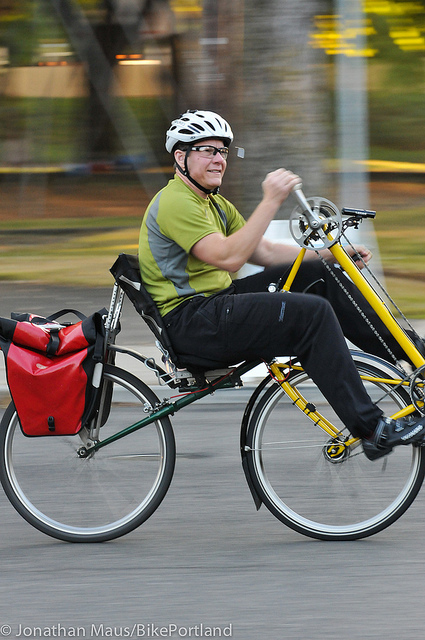 I love low-riders but omg I don’t need another direction to take my already scattered interests.

Maybe I’ll ride the ape-hanger on Friday. Not dressed as Ke$ha. I was thinking of going as an old white guy. I have the costume.

I have an old white guy costume, too. And after checking out a couple of her videos, I think I’d do better not to try to look like Ke$ha.

Not that I won’t be in costume. Maybe something green.

Look closely at the end of that sentence.

Mind=blown. You guys are too funny!!

Planning to join you all Friday for my first Flock ride, but I don’t see where/when we meet? I thought someone said you usually meet at Dippy, but someone else told me it’s the Jail Trail. Would someone please post the details for me?

We meet at Dippy and depart at 5:30pm

I’m excited that you’re going to join us, srpit! We actually meet at 5:30 at Dippy and depart at 6pm after everybody is signed in and all that — either way, see you at 5:30 on Friday

If you use either Facebook or Twitter, those are both good ways to get details & updates about the rides.

I’m also working on updating our website, which had been neglected for a while. Soon it will provide all those details as well.

That time i wanted to type but I’m not good at posting from my phone.

Thank you both! See you Friday.

Here is the Beautiful route!!!!!! Enjoy a fresh new route and scenic view of the City.

i am really hoping im not the only one in a costume.

If i can get out after and before work, ill be in costume Paul

pbeaver – I can still get in my costume. Don’t worry. You’ll be fine.

Um…… Please someone post that pbeaver won’t be alone dressing up for this ride.

(and the epicness may vary, but i have the feeling that its gonna be awesome.)

You shoul end the ride at the tennis court lot at frick around 7pm instead. Nice park facilities right there too. This is totally not self serving. Nope.

Yeah, but you should see the kind of people who hang out there around that time.

you’re missing the point, as usual.

Just picked up my “costume” lets see if anyone notices that I’m dressed up.