For those who do not ride during winter

Some of us do not ride during winter. Check this roller http://www.youtube.com/watch?v=kC7QGFyOXlE&feature=related

You don’t ride during the winter? That sounds like a really boring winter.

I love that set of rollers. Although I’d spend too much time singing “I’m a lumberjack, and I’m okay…”

I thought the message was gonna be HTFU

Saw it at InterBike but never gave it a shot.

I’d be more inclined to ride in the winter if I had more confidence in drivers’ ability to keep their vehicles under control.

But it is hidden. This type of roller kind of outside use only (big, heavy, loud). So one still be using it in subfreezing temperatures.

From Russia with love: 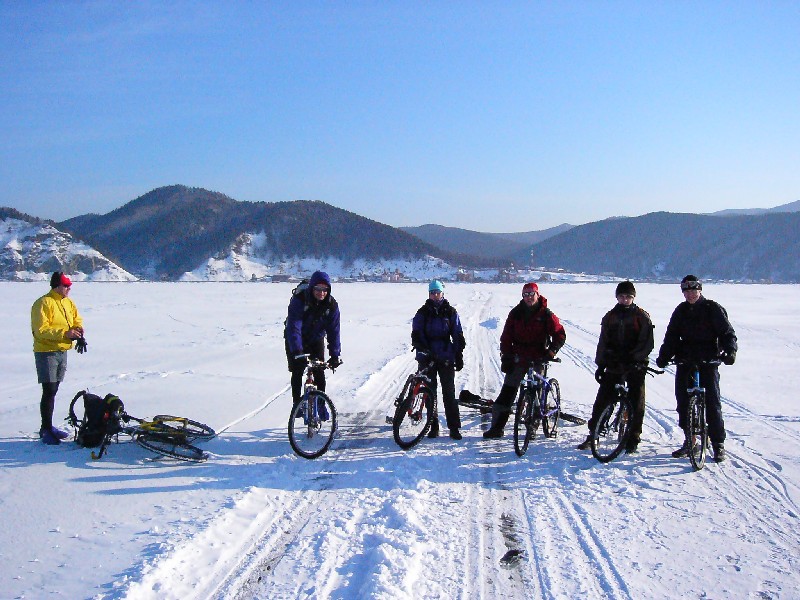 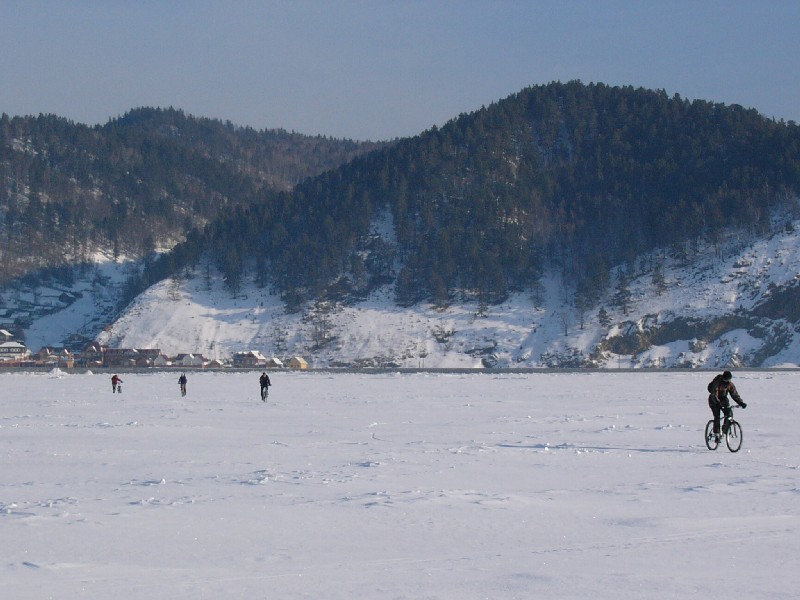 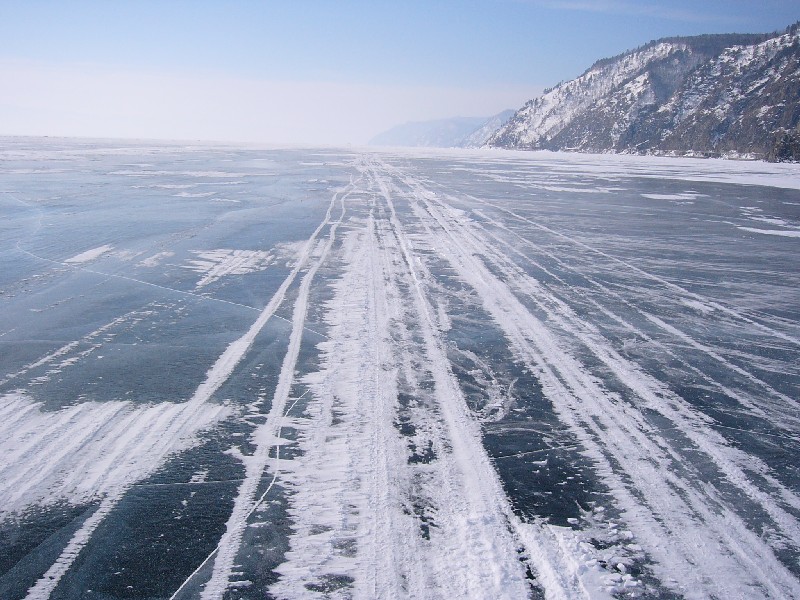 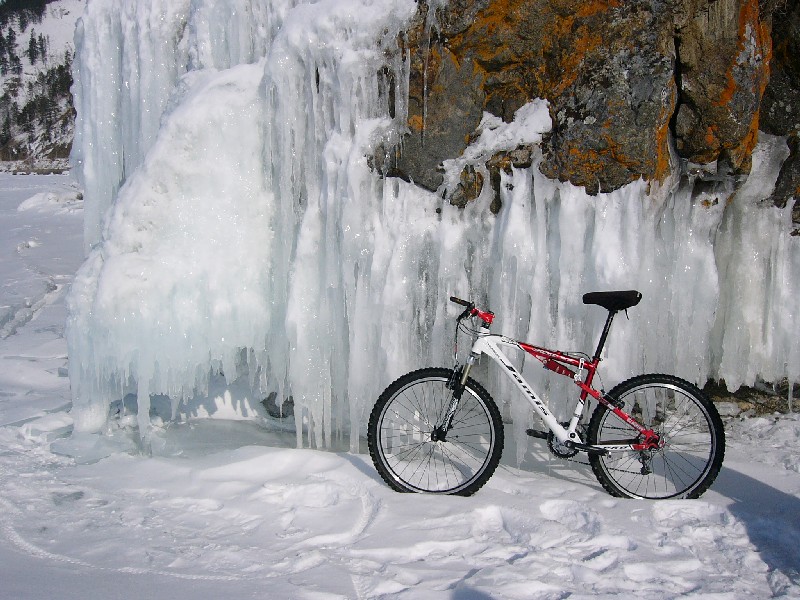 There are lots of crazy people in Siberia.

I’m surprised they are using geared bikes in such cold/harsh conditions. Even chain oil has to be an issue.

Must be spring, I don’t see even one balaclava!!

@Marko They use special auto motor oil something like 0W60. Works fine.

@sew some people use balaclava but those who in Siberia don’t use them. Instead they are using something like bandana (Maxim and his daughter Sasha) covering face up to eyes and letting it flop around chin. As soon as too hot they move it down to mouse or even chin. Getting cold and they move it back. They adjust often. According to Maxim it’s much better then balaclava. And on the head they have multi layered stuff — bandana, wool, something to keep wind out.

“Instead they are using something like bandana” I use a shemagh in exactly that way. I used to have a neoprene face mash but it was either on or off. The military scarf allows me a wide range of adjustments.

I had never heard the term shemagh before, but if it’s cotton it might not be the most optimal thing. A big old oversized wool scarf would work well, or even polyester fleece for the wool-averse.

@rr those arent the $170 tires. those things only fit on a moonlander, and even then, just barely…

MShemagh. Keffiyeh. “Military scarf. It’s called a bunch of different things depending on whether you want to admit its arabic origins or not. But, basically, it’s just a large scarf. A fairly loose weave cotton that breathes pretty well.

I hear everyone warn about “cotton kills” but really, for a short bike ride and to have something covering your face, it’s just fine, even when it’s really cold. That it is a fairly loose weave allows it to not fog up my glasses as much as wool or fleece would. I also like that it covers my head and under my helmet. Couldn’t do that with a regular long scarf.

cut off the bead (the metal/kevlar part) from one pair (the 26 x 1 3/8 above) that holds the tire on the rim. These become a liner to keep the sheet metal screw heads from puncturing the tube.

How would you even stay hydrated in conditions like that? Even a camelback inside your clothes would be useless since the tube would freeze in seconds. Plus I would be very leery of keeping anything with water inside my clothes, a little leak could be life threatening. Did they have support stops? When you camp in those kinds of temperatures you have to keep a pot of water on a fire constantly just to drink. I suppose you could carry a carton of sherbet, that might be your best energy drink!

Depends how deep the snow is, but this clip was taken last winter:

And let’s not forget that great Pittsburgh New Year’s Day tradition, Icicle Bicycle! That may not be Siberia, but it can still get PFC on the ride!

@edmonds59, remember that is Siberia. They don’t worry about keeping hydrated with water much. They use something that has a lower freezing point instead.

@btdt if you know how i can make my own 5″ wide fatbike tires i’m all ears!

these giant knobbies are what we’re talking about, not studded tires. as long as i own or can borrow a power drill and can buy sheet metal screws, i’ll never buy studded tires.

@edmonds59 I can ask Maxim if you want (he answers either in his live journal or on one of the bike forums). But in Moscow they use camel backs and after drink they push air inside right away so it’s not loosing temperature and there is nothing to freeze.

@jonawebb nope they do not use vodka.

Alcohol and low temperatures are incompatible. You are going to loos your fingers and toes really fast. They can use some alcohol after and some people do it but not before and during.

@cburch you make your own studded tires? How do you do that, and why did I spend soooo much on studded tires when I could make my own?

@cburch There is a reason why they like this tires.

I guess you know it. Maxim and Sasha very often go for forest rides and make new tracks. It’s OK while you are on the track but as soon as you step aside… If I make enough money over the next couple of months I’m getting a Moonlander. Should be safe as long as stef gets her cross bike first.

Damn right. Then I will steal your moon lander cause it looks fun to ride.

for real. i am from buffalo, and that third picture really makes me nostalgic.

also, anything is better than 36 and rainy.

I’ll think on it…

>It’s the ultimate Iditacreation to date, Roger Cowles’ Icicle Bicycle. This two time Iditabiker’s custom made bike has TWO rims laced to each hub with a 2.2 inch tyre on each rim!

you could probably build up the wheels with studded tires for less $ then one of those extra fat studded tires.

Now what frame you could get it all to fit on.. that would be a different issue

reduce the build up, weight, and drag of snow on the spokes for deep snow