Stu, I don’t understand the issue. Craig to Bellefield would mean you’d be in the right lane, I think.

What am I missing here?

The fact that bikes in the bike lane are supposed to stop there and wait for their own signal, rather than trying to cross with auto traffic which is, indeed, turning across them.

This could probably be signed better, though I haven’t actually seen that side of things myself.

Someone please post video showing this in action. I missed that because I didn’t know it existed, so executed a left lane change instead.

The sign’s there. I’ll try to get a photo of it today. Maybe it needs to be more obvious, but remember, this is temporary until the traffic signal can be reworked to have a dedicated bicycle phase.

I will reserve judgment until I see the final product in action. I am not yet cynical, merely skeptical, and a bit worried.

Here are some photos of the current state of things for westbound cyclists. (Click for bigger.)

First, cyclists in the westbound bike lane pass many signs, including this bunch just past Dithridge. The “All traffic must turn right” sign needs an “Except Bikes” addition (as with the “Wrong Way” signs farther along Forbes, which already have these). Just as cyclists reach the Bellefield intersection, they should see the first of two “Bikes use ped signal” signs: The second sign is just past the Bellefield intersection, as the contraflow bike lane begins: I think these signs are sufficiently visible for cyclists who are actually in the bike lane, but a cyclist might, as Stu did, move left well before the first sign, if he knows that there’s a contraflow lane but not that there’s a good way to get there from the bike lane. But I’m not convinced that will be common enough in the future that it needs to be “fixed” with more signage. I expect novices will just stay in the bike lane and see the signs.

A note about the traffic signaling at Bellefield. At it is now, even if no one pushes the pedestrian signal, there’s a phase where east-west pedestrians get a walk signal, along with eastbound traffic on Forbes that’s continuing straight, not turning. (Westbound traffic gets a red light and a “No turn on red” sign.)

So even with no dedicated bike signal, cyclists entering the contraflow lane should only have to contend with pedestrians moving in parallel to them, no cars.

I guess the question is, if bikers use the peds signal to cross and get into the contraflow bike lane, will they be queuing up in the right lane on Forbes and backing up motorist/bus traffic trying to turn right onto Bellefield?  If so, that could lead to angry drivers and confrontations.

Stu: there is no crossing of lanes – just stay in the bike lane. If you are going westbound on Forbes (from Craig) you simply follow the ped signal (like the signs say) and stop at the light on bellefield (unless you have the walk signal). Then you just continue straight (during the walk phase). At this point it becomes “contra-flow” because Forbes is one way, except bikes.

edronline: if you stay in the bike lane at Bellefield, cars simply just make the right turn and you’re not in the way

Also, this intersection should be getting a bike signal next year to replace the “bikes use ped signal”

Well, OK, I believe you. I will have to see it in action. Again, I am not cynical, just unconvinced.

check out this vid

These bike lanes are designed for riders to go the opposite direction of cars, in order for westbound bicyclists to access Schenley Plaza as well as the bike Lanes on Bigelow Blvd. Learn more on BikePGH.org

Video: How to Use the New Forbes Ave Contra-Flow Bike Lane

i also found out the bike signal may be in by next month, instead of next year like i originally thought

The contraflow lane is pretty cool. Good news on the light, I think that will be a good change to reduce confusion.

Took it twice this week inbound. My biggest concern was with traffic making a left on to S. Dithridge as there were several vehicles attempting to do this maneuver. I yielded to a car to allow them to complete their turn this morning.

Looks like they changed the barricade setup for student arrival @ Bigelow and made it easier to traverse the copenhagen left / hook turn while allowing cars to turn in to the area between 5th and Forbes.

West-bound Forbes at Bellfield is very reasonable. You can even punch the pedestrian cross button without that much effort, though you have to reach around the pole.

Minor musings:
– a couple of the Jersey (shore?) barrier seemed to be leaking. I guess this doesn’t quite matter unless a row of them develop problems.
– But are these permanent or will they be replaced by (serious) bollards? Pittsburgh does get below-freezing temperatures in the winter. Does the filler water get salt / anti-freeze?

@stu, A traffic light for bikes should go green during part of the cycle in which any turns except for bikes is forbidden.

– But are these permanent or will they be replaced by (serious) bollards? Pittsburgh does get below-freezing temperatures in the winter. Does the filler water get salt / anti-freeze?

These are not permanent. I think originally, they were planning on no protection for the first year, then they must have changed their mind.

Forbes will be ripped up in 2018 and repaved. The 2018 goal is to move the parking that’s currently on the Schenley Plaza side, to the Cathedral side, creating a parking protected bike lane there. Plaza side, the bike lane will be next to the curb.

Also, that signal will give the walk signal without needing to press the beg button

Does the electronic “No turn on red” sign on Forbes Ave. Westbound at Bellefield Ave. ever not light up during the red phase? The same goes for said signs in Downtown and Millvale as well. Every time I am in these locations, The sign is active.

Rode the contraflow lane with the signal today.  It was awesome.

I’ve ridden this twice now and both times made mistakes that put me in the path of traffic. It takes some getting used to. And the second time there was an idiot bicyclist coming the other way, too. Dude…

This discussion board told me how to do it. Even with the light and signs it is still a tad confusing.  Some markers on the road, like “one way” and arrows would help.

Yesterday, There were cars parked in the eastbound bike lane. I got it on video.

@zz: Well, get the license plates on video so there’s evidence. Then get in touch with the authorities.

The situation you video’d is pretty out there (so to speak). But it’s pretty common around there, especially on Bayard/Bigelow. My own attitude is that, if I can ride by without feeling that I’m in danger then I can live with it.

On the other hand, this is one more data point for getting a camera…

Was how I knocked on the window an explained the situation the right thing to do?

I do not want to call 911 for non-emergency situations.

@zz, fair enough. But let me relay some advice from my brother-in-law, who was a cop in DC: “Whenever you see something wrong, call the police. They’re not doing anything else.”

Well, you never know what a driver might do; they’re already doing something wrong. It’s safer to leave them alone.
Calling 911 is ok; they will decide what to do. Chances are there’s patrol car cruising nearby and it’s easy enough to swing by. And as Jon points out, it’s their job.

I do blame people parking somewhat, but in this case the city didn’t yet move the parking signage, so it does appear that the end of the parking zone is in the bike lane. Look closely

I can see people being a bit confused after one person parks over the diagonal transition of the bike lane, because then it masks the fact that the bike lane shifted to where the parking lane is.

I put in a 311 request a couple days ago about moving the parking sign back to before the kink in the bike lane.  Additional 311 requests might not hurt though.

FYI. Parking sign has been moved to before the bike lane transition (at least as of yesterday evening). Nobody was parked in the bike lane when I rode through.

Today, I was heading south on Bigelow Blvd. On the block between 5th Ave. and Forbes Ave., there was a school bus parked in the bike lane.

Why is there so much speeding on Forbes Ave. and 5th Ave.? The traffic lights are timed such that if you are traveling at the speed limit (25MPH), you will not have to stop once passing the light at Bellefield Ave. I also think a RRFB or HAWK crosswalk should be installed halfway between Bouquet St. and Bigelow Blvd. on Forbes Ave. as I was once run off the road near there trying to get from Bouquet St. to the 7-11 store.

This was cross-posted from Liberty Ave Thread.

What is the chance that someone who just saw Oakland for the first time ever would think that Forbes Ave. was designed to prioritize cyclists based on these photographs?

Thinking inside the box, or something. 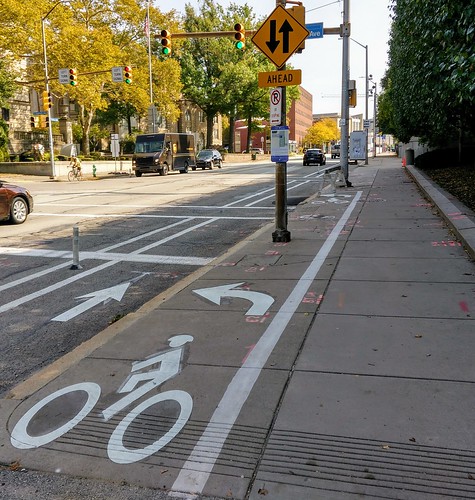 Sidewalk-assisted Copenhagen Left!  This will be a really nice touch when it’s formalized in the bigger project next year.

@NMR: I agree that something like this will be great when they finally rebuild the street. But the current version just doesn’t work. When you ride by the first thing that strikes you (well, me) is that there’s a light pole right in the middle of the jug handle.

I accept that the angle of my photo doesn’t quite bring this out. But my intent was to show that good intentions don’t always translate into good implementations. What they’re doing (I hope) is trying, by trial and error, to learn how to make this stuff work.

You’ll note that the jug in the video you point to is placed within the pole line to avoid this problem. But of course it’s Pittsburgh, and sidewalks are mostly not wide enough to accommodate such layouts. The sidewalk in front of the Carnegie looks wide, but only in context. At the very least the line should have been a broken one, to license crossing into pedestrian space.

I’m not a traffic engineer, but I do fancy myself as a (cycling-oriented) amateur: I would make the whole thing fit in between the pedestrian cross-walks, with its own curb-cut(s), separate from the ADA ones.
Ideally the roadway will have been narrowed to allow things to fit better. The area in any case needs all the traffic calming it can get.