In case you haven’t seen it, this is what (some of) the construction at the south end of the Glenwood Bridge looks like. This photo was taken from the side of route 885 just south of the Glenwood Bridge, looking east toward Homestead along Route 837. The deck of 837’s overpass above Carson Street is being replaced, apparently.

In the process they’ve torn out the sidewalk that used to be the bike/pedestrian connection from Haysglen St and Baldwin Rd up the stairs to the Glenwood Bridge (image center).

So currently, during this construction (which will last two years), the pedestrian route across the Glenwood Bridge has been severed! I think you can get onto the sidewalk from the north end, but at the south end of the bridge, you hit a dead end unless you’re content to walk in the road with 60 mph cars, or scramble through the woods.

Cyclists that don’t want to mix with 60 mph cars are out of luck, on this bridge, for a couple years, it appears. 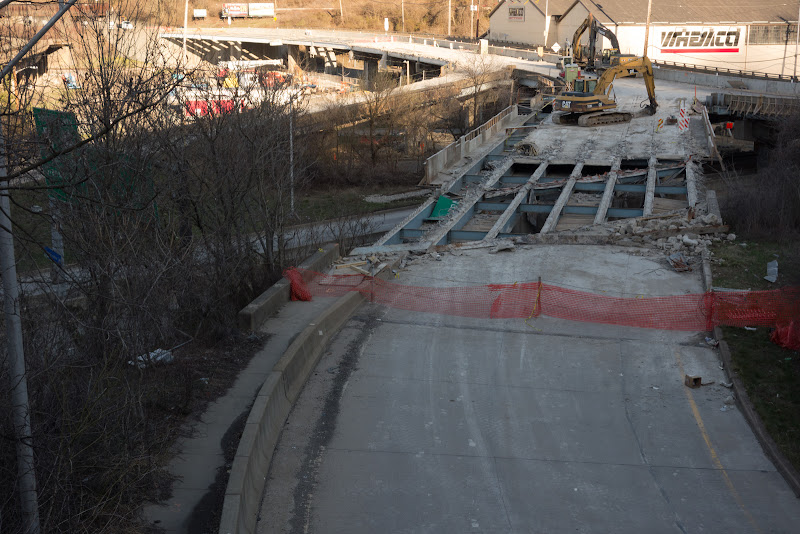 …and more to the point, we only find out about this by finding out we cannot actually use the path we intended to use that morning.

I’d also use caution around Keystone metals if you’re going up 885 or Glass Run Rd from the trail. This morning they had the big excavator mounted jack hammers hammering pretty close to being directly overhead, but not much if any protection from debris falling on cars, peds, or cyclists below

I’m also somehow subscribed to an email list from PennDOT about 885/837 projects and they sent an email about the ramps closing today, but the pedestrian changes weren’t mentioned in the email

Email response back from Steve Cowan:

Thanks for your e-mail. Safety is the highest priority for the Department.

I don’t believe there is pedestrian access on any of the ramps in that interchange. If you are familiar with the area, there are certain portions of the roadway and ramps where there is barely a shoulder. I’ll need to discuss this further with our Traffic Engineer.

I can tell you that I just got word from the contractor that they do not think they will need to close the southbound Route 837 ramp now. They think they can make the repairs from the closed ramp above.

@pierce – can you tell us how to get on that email list?

I really hope that after this construction, they rebuild the staircase and replace it with accessible ramps that allow easy access via bike.

Could easily connect you to with the almono develoment / duck hollow trail if it were not for a few small gaps.

@billpeduto @BikePGH @ACE_Fitzgerald It would be helpful to make a path along the glass run road ramp to provide an alt path to baldwin rd.

Surely those contractors have the equipment to make an alternative route for bike / peds. Some landscaping, move a few concrete barriers, and relocate some guard rails on the glass run road ramp and you could walk along the far edge of the shoulder down to glass run rd, make a left and get to baldwin rd.

Crosswalk across glass run rd to the sidewalks on the other side would be nice too.

@benzo said “Surely those contractors have the equipment to make an alternative route for bike / peds”. Good idea.

See map http://tinyurl.com/dzuyqa and click on the “SW Connector” idea and read what I’ve written there: a ramp from the west sidewalk of the Glenwood Bridge, already existing in the hillside, that extends nearly all the way to Glass Run Rd. This was a route suggested by Mary Shaw & Roy Weil. This would be a fine temporary connector (and useful as a connector to Glass Run Rd for the long term, even if it isn’t the shortest and safest way to get from Glenwood Bridge to the GAP trail).

PennDOT should build it. Today!

That’s the same route I was thinking of. Or even just utilize the shoulder and put up some construction barrels for protection.

It still narrows quite a bit towards glass run road and the lanes would need to be narrowed or guard rails removed to make space for a path.

Our county exec responded to my tweet with instructions on how to contact penndot to bring up the issue. I’m going to call today.

Though looking further, it seems that the section that narrows is a small bridge over glass run, so the lanes would likely need to be narrowed at the far end of the off ramp or a pedestrian bridge built.

I don’t think this bridge currently gets much pedestrian traffic, but this is likely to change with the Almono development adding hundreds of upper-middle income apartments/condos where they may want to access the GAP trail.

I wonder if anyone has brought this up & if PennDot is listening?

I explored more today and discovered that I was wrong when I said the pedestrian route across the bridge had been severed.

PennDOT has created a (presumably temporary) detour: Below is a picture, looking toward Glass Run Rd, from south end of Glenwood Bridge’s west sidewalk. The white and yellow jersey barriers are new, and they form the new sidewalk detour that can be used to walk or bike to Glass Run Rd, Baldwin Rd, and the GAP trail.

So PennDOT has done a better job of accommodating pedestrians and cyclists than I feared. This detour route is not ideal as a permanent route, since it involves stairs, and there are some curbs to jump, but it’s better than nothing. 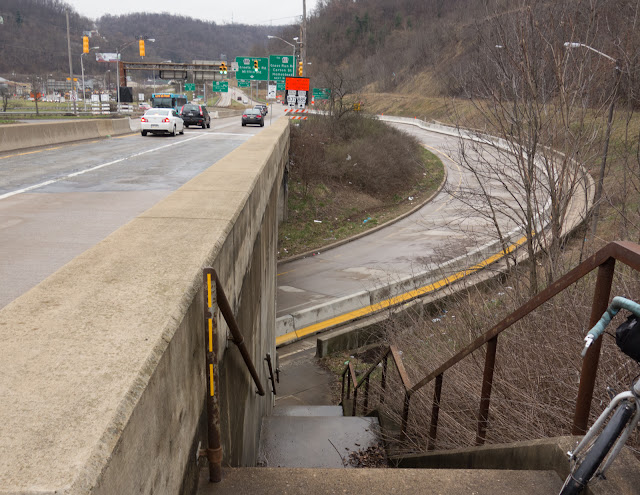 I think I found the answer of how to subscribe:

Don’t know where I came across it, maybe a PennDOT press release from January ’15 when they were closing 885 to do culvert work

The suggested detour paulheckbert posted is pretty much exactly what is in place. It’s a protected path, with concrete barriers between the path and the street, with new crosswalks painted across glass run rd. Worked like a charm today!

Except the crosswalk, nobody stopped for me, when i was 1/2 way across the street by the little concrete island that like a foot wide, but that’s par for the course.

I have pics, but i’ll post them when i have a computer in front of me.

Actually, the SW connector shown at http://tinyurl.com/dzuyqa is different from the current PennDOT cattle chute. The SW connector idea is to eliminate the stairs from the bicycle route by staying level and following the terrace that is cut into the hillside. The terrace is currently overgrown with small trees and shrubs.

Yeah, eliminating the stairs makes sense from a bicycle standpoint, but takes you a lot out of the way, and introduces really crappy road crossings.

Ultimately, I’ll be happy to have the stairs back (or better??? Are they rebuilding these as a ramp when they are done?)

It makes much more sense for a pedestrian to take the old stairs if you want to walk from hazelwood over to the GAP trail to go watch the eagles.

The terrace is currently overgrown with small trees and shrubs.

Is there any point in showing up with some tools to clear the way? A photo would help here.

Looking west, with Glenwood bridge out of view to the right. Proposed “Southwest Connector” is shown with red dots. Road at left is Glass Run Rd. Images from Google Earth, 2016 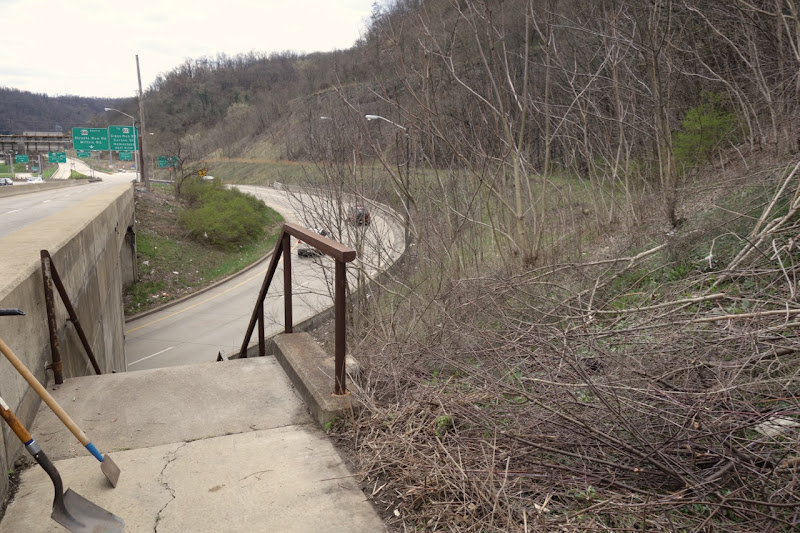 The top end looks like quick work. The lower end might be an all-day project. But it looks do-able.

Meh. There is a cattle chute now. No need really unless you want to tie in to the really steep goat path up to hays woods.

Thanks for the heads up everyone. I’ve been looking for a way to include Hays Woods on a ride loop. This thread helped me figure out how to drop down out of hays woods and then cross the glenwood bridge.

During the winter I think the terrace would be the easiest way to get to the sidewalk on the glenwood bridge. With the weeds grown in already, i’ll exit hays woods near the glass run road extension. Head east on glass run road for a few hundred feet and then turn left on baldwin road. From there, take the stairs up to the 885 exit ramp over pass. The sidewalk there takes you to the stairs to the glenwood bridge ramp. That’s a bunch of work considering the glenwood bridge stairs aren’t too far from the hays woods trails. If the bushes weren’t grown up or if the off ramp had a wider shoulder it would be way simpler.

@dfiler: presumably you noticed that most of the comments above date from 2016 (note to others: the sidewalk reopened since then). For more recent thoughts on connections in this area, see the document “South Hazelwood Trails” at https://furnace2furnace.org/reports/

How much of the overgrowth is knotweed? A half hour with a good knife could clean up alongside an established sidewalk pretty well. A proper job with a shovel to take out the rhizome might take the better part of an evening, though its effects would be more lasting.

Yeah i noticed the thread was old but it came up when googling biking hays woods. I missed seeing the staircases on google maps and street view. The descriptions here made me take another look and I found a route that will work for me.

Street view from aug 2018 doesn’t show any knotweed so that’s encouraging. I don’t live nearby or travel the route routinely enough to be motivated to do the clearing. There probably isn’t enough foot or bike traffic that the path would become self sustaining. Maybe after the GAP and DHT are connected to the Glenwood bridge there would be more traffic. It would really make hays woods accessible to the huge number of people that travel those trails. Or at least who used to use the DHT before it was obliterated by a landslide.

That terrace or “shelf” on the hillside that @dfiler speaks of, where the trail could be built, could probably be cleared with a few people, some pruning saws and pruners, in a couple hours. That’s what my memory tells me. I don’t think there’s japanese knotweed there. But a chainsaw and gasoline-powered hedge trimmer might make the work go faster.

We could wait for PennDOT to do this or we could make it an urban guerilla project and just do it.