There are signs and the trail is blocked at the east/parking lot end. It says it is closed all the way to hot metal bridge (like there is anywhere else to go) and there will be no detour posted. The sign indicated it will reopen at the end of the year. 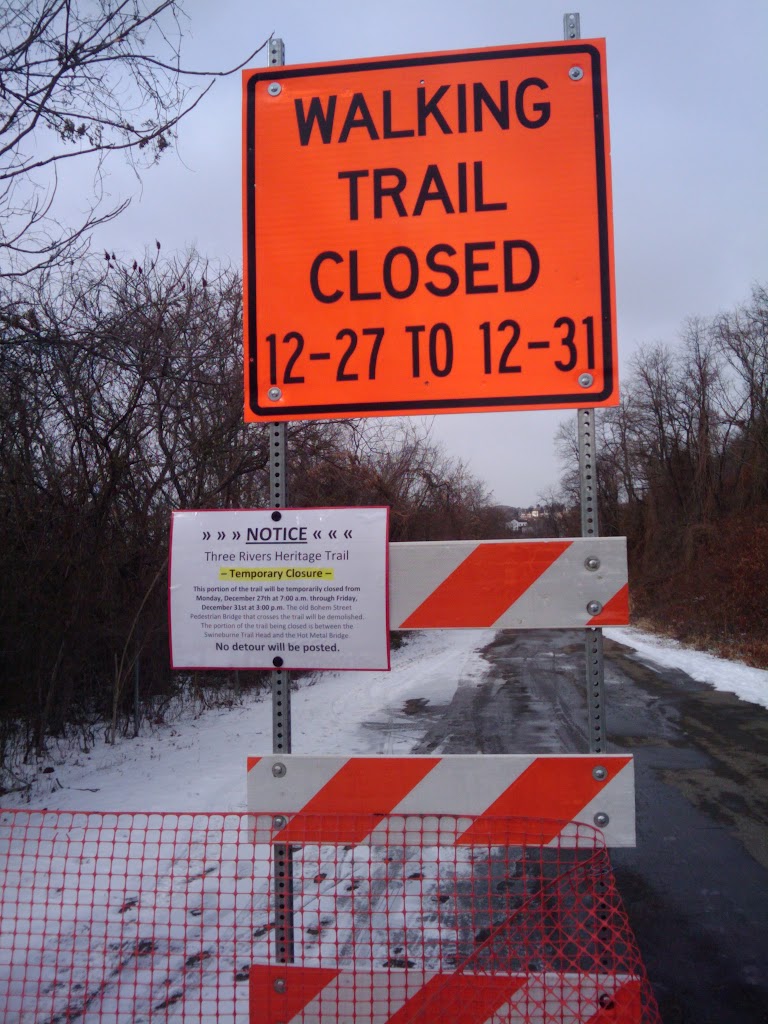 looks to me like there is an opening to the right of that sign? are people still going through?

It was blocked, but a work truck was driving through when I took the photo so they moved the fencing for a minute. I could see further down the trail and it was blocked by construction stuff and lots of worker people. I would have blown through and tried to go around them in the grass but I figured they had the bridge side blocked and I’d have to go back anyway.

There was one car in the lot with a bike rack, so I figured I’d post here if by chance he/she reads the board.

Some teenage girl was walking to work in the southside when I was there taking the photo and she was calling her dad for a ride.

posted this on the blog last week. they’re taking down that rusty walkway.

Thanks erok, my fault then. I guess I don’t really see the blog posts unless they are mirrored here or on the top of the bike-pgh main page.

Dunno, there are plenty of bike trails that go from nowhere to nowhere.

Also–if the walking trail is closed… does that mean the bike trail is open? (Um, just kidding.)

I must admit I was taken by suprise by this and a bit miffed I had to ride down the closed trail before coming to the blockage. It appeared (ahem- clearing throat sound) someone was able to get by on the N side then S side of the fences while travelling east. I had expected that they would just destroy the bridge but riding down Second Avenue this evening I saw that they had taken the bridge down in two whole sections. The Swinborne lot has a number of flatbeds that they will heave the big pieces onto to haul away.

Every time I pass that bridge, I want to attempt to walk over it. Guess I’m too late now!

Sidewalk along the outbound side on second avenue is passable. It’s difficult to cross over though.

It used to get you from Second Ave waaay up the hill I-forget-where. It’s been welded shut at the Second Ave end since at least mid-summer 2009. I don’t know the back story, whether it was the bridge or the steps above it that was in worse shape.

It once connected up to a footbridge over the Parkway East, removed in 2006, and then to Bohem Street. The great Pittsburgh Bridges website has a page all about it.

I am sad to see a set of steps go (even tho these ones have been unusable for years).

Yesterday I saw that they had pulled the metal steps across Second Avenue as well. They had lifted them in their entirety and they were setting on the trail.

I also noticed that the flat bed trucks that I thought were going to haul away the pieces of the concrete bridge were not in the Swineborne lot anymore, yet the bridge pieces were still sitting on the trail. Yesterday when the metal part of the bridge had been pulled up. This evening, the bridge pieces are still waiting to be hauled away.

The trucks were Lomma, the rigging company on the job. There’s no way the crane they had there could lift that concrete and swing it onto second avenue. That portal bridge at the trailhead doesn’t appear as though it can support too much.

They had a sizable crane the other day that was sufficient to lift the concrete pieces off of their pylons and lower them onto the trail and also lift the metal bridge from Second Avenue unto the trail. Surely, if they brought the flatbeds onto the trail they could be loaded. As to the bridges at the end, they used to carry pretty substantial rail traffic, I have no doubt that they could carry a tractor trailer with some concrete.

On the other hand, the trailers that were there aren’t anymore and the concrete looks like they have been breaking it up. Perhaps after bringing down the bridge pieces they discovered they weren’t in good enough condition to set them on flatbeds and they sent the trailers away, are beginning to break them up with jackhammers and will haul the pieces away with a dump truck.

I’ll be leaving work a little early today and see what the results are. The plan was that they would be done by now and the trail will be reopened.

That’s possible. Don’t need a complete shut down to break up those beams and truck out, just a lookout to ensure periodic work stoppages for passersby.

I’m hoping this will all be done today so we can use the trail and parking lot tomorrow.

Trail’s open. Top beams are rubble. Doesnt look like it took much.

Check out the angles and bars left on the cribbing. They did some wacky stuff back then.

It looks like they planted some beaver food just beyond the 10th st. parking lot:) Hopefully they will survive the salt and other junk.