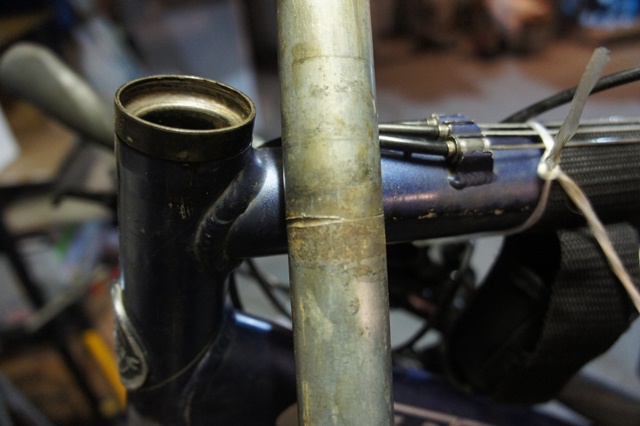 So a couple of things… My fork has been loose for a long time. Before my hubs were loose so it was harder to tell, and maybe they still are, but less so than before. (The pitting was previously remarked on this forum to be like craters on the moon)

Upon taking the fork out there was basically no grease and no bearings. I’m pretty sure the bearings that were in there were 1/8th bearings.

When I last did this (a year or three or four ago) neither Kraynick nor the Trek store had the right bearing retainers and so I ended up reusing the retainer on the bottom and putting in loose bearings on the top.

The retainer has totally disintegrated so that’s not an option anymore. I meticulously placed what I thought to be correct 1/8th bearings on both the bottom and top of the headset, holding them together with grease, only to figure out I couldn’t get the fork through the bottom of the headset because it was running into bearings and then I wasn’t quite sure where exactly the bearings are even supposed to sit.

So I looked online and it looks like for 1-1/8″ headsets, all they have is 5/32″ bearing retainers, which I ordered and will see if they fit.

But what do you guys think about the damage to the fork?

Whoops, don’t know if you saw my photo or not, I uploaded it with Google, but did it in a weird expiring way

I would not ride that fork at all. Accident waiting to happen.

I second Chris. Once you have a crack, it will propagate and you will have sudden catastrophic failure,

yikes. yeah toss that fork and then follow my previous advice as well. you got grit into your headset, which ground up the bearings and the steerer tube over time.

I agree with the comments above. The fork can be fixed but doing so is no trifling matter and in all likelihood is not worth the effort.

Nooooos! I’ll be doomed to a two-toned bicycle. Now I’ll have a wobbly wheel and a mismatched fork

You could attach a spring between the frame and the fork (like this:

) so that at least when it breaks you’ll keep going in the same direction, more or less.

If you’re worried about the fashion statement of a two-tone bike, you could get your frame and replacement fork powder coated or painted so they match. That would also give you an excuse to continue the upgrades.

I mean, if you’re gonna strip the frame, you might as well replace that old BB, and while you’re at it, maybe some new cranks, and ooh! new chainrings…but if you replace those you gotta replace the chain and then you *have* to get a new cassette…but with that rear wheel…

If nothing else, I am an enabler.

Ironically, I’ve always wanted to add cantilever breaks, but only have mounts for a disc break

Now this happens and I just ordered a pair of BB7s

Ironically, break doesn’t mean what you think it means. Break vs brake.

I’m calling for the grammar cops on this one.

I wouldn’t always chalk up a mistake to a lack of knowledge, but thank you for all the effort you put into correcting me

I woodent allways cholk up a misteak to a lack of nolweje, butt thank u for all the efert you put in to ceerrekting me.

Coulda been worse, I guess…

I was thinking about this and if you are bound and determined to keep the old fork (I assume the steer tube is steel), you can fix it safely for less than $20, as follows:

1. Remove the star nut. You may have to drill it out.

2. Buy a piece of 7/8″ outside diameter D.O.M. (drawn over mandrel) steel tube from eBay (less than $10). It should be within a few thousandths of the fork’s inside diameter. Do not buy pipe; you want tubing. Pipe is for transferring liquids and gases; tube is for structural uses.

3. Cut the D.O.M. tube to a length that will let it be inserted into the fork well past the damaged spot. Bevel the ends of the tube with a file or grinder.

4. Clean the inside of the fork by pushing a solvent-soaked piece of a rag through it until the rag comes out clean. Then repeat with isopropyl alcohol.

5. Insert the D.O.M. tube into the fork. If the fit is just a little tight, use the hot/cold trick: put the D.O.M. tube in the freezer and put the fork (assuming it’s all metal) in the oven at 200 degrees for an hour (be sure the fork is very clean).

6. If you get a good “interference” fit via the hot/cold trick, you could probably just leave it at that, or maybe use some JB Weld to bond the D.O.M. tube in place at the top for a “belt and suspenders” approach. If the fit is a little bit looser, then bonding the tubes together with good epoxy would suffice, or do a few proper plug welds, which I would be comfortable doing.

This is a lot of work to save an old fork but if for whatever reason you would rather spend the time than the money for a new fork, it is a viable fix.

Why not just clean up the gouge, fill it in with a weld, and file it down?

I would be comfortable doing that to my own bike, and in fact did a similar repair to a threaded 1″ LeMond fork to convert it into a threadless fork. With that said, it was difficult to make a strong weld AND avoid warping the steer tube. The suggestion above is for a more robust repair that could be done by someone who isn’t highly proficient at welding.

I know a proficient welder, but I’m not sure if she has the right equipment

I’m also dubious that a weld would make the fork safe against cracking from the bendy forces probably put on it, but I don’t know much about such things

Putting tubing inside of it seems like a decent idea

I don’t think the bendy forces would be a big deal, honestly. Unless that crack is halfway through the tube? (I can’t really tell from the picture)… if it’s just on the surface, then the goal is to prevent the crack from growing larger and/or damaging the new headset.

So long as the weld is small, I don’t think it would stress the metal too much.

But then, why take chances? It’s one thing if such a repair will get you home on a long ride. Quite another when you are already home.

If you follow Jacob’s advise (which is bloody fucking brilliant btw), make sure that the steerer is steel (use a magnet). Different metal types could cause the fork to seize.

Seen on CL, has yr cantilever studs, no disc;

I think the sleeve is an awesome idea. I used a steel sleeve/spacer to fit a modern sealed bearing headset on my old Schwinn. The sleeve had a beveled edge to get it started in the head tube. I used a flat piece of wood to tap it into place & the headset fit perfectly.

I can’t tell from the picture the depth or length of the gouge. If it’s not that bad it would be an easy weld for someone with experience.

Also when the headset is replaced the fork most likely will not line up on the same exact location as the repair. It would not be under the same amount of stress.

Hmmm, this whole thread seems like an airtight argument for doing your headset maintenance every 8 months or so.

I never maintain mine.

Still a good idea to take it apart and clean/regrease it once or twice a year.

Update: I still haven’t really done anything with this, just hanging from the basement. But I was working on another bike and decided to take another look at this.

Whereas I thought the ball bearings and racer had disintegrated on the bottom, they were actually just covered up with a dust cap, and the dust cap matched the color of everything else around it, so I didn’t realize it wasn’t actually the cup

So after my crash in January, I started riding this bike again, and never really resolved anything

The fork kept getting loose and I wasn’t really sure why. I thought maybe it was because I lubricated the steering tube (didn’t know I wasn’t supposed to) and last week I used locktite on the stem bolts to see if that helped (even though they never seemed loose)

on a related note…

I was having some issues with my headset alignment and I finally found the problem on my end. The star-nut was slipping when I pre-loaded the bearing resulting in a misalignment when I tightened down the stem. Thankfully, it finally became bad enough that I had no choice but to notice. I replaced the star-nut and my steering has never been smoother. In hindsight, I wish I would have replaced the 10+ year old part when I swapped out the headset.