Strip sewer project to be done by January

PennDOT revises their 12-year plan; Smithfield Street, Highland Park, and Mckees Rocks bridges will all come under the proverbial knife, with Smithfield the first one up:

It’s probably fruitless, but any way that bike advocates can provide input for these projects? All three bridges could have a much better setup for cycling. Smithfield isn’t that problematic, but the other two are.

I think that the Highland Park project doesn’t actually touch the bridge itself but is rather that widening of 28 next to the bridge so that there are 2 lanes of traffic on 28 both north and southbound.

Penndot presented plans for this maybe about 5 months ago at a meeting at fox chapel area high school.  THey’ve also been doing hillside surveying (they did this about 5 months ago also).  I guess they’re still drawing up plans and waiting for money.

they were very explicit that they wouldn’t be touching non-28 on/off ramps, as they didn’t want to get embroiled in the r47 development fight that was white hot last year in aspinwall. the anti-r47 crowd felt that this was a back door way to get access to the r47 development.

@eric I think they are two different projects for the HP bridge area: one for the access ramps on the 28 side, which is the one you refer to, and one for the bridge itself several years down the line.

“Update on R47 and trail from Aspinwall to Etna.”

It is still useless unless it connects to the Millvale trail.

As far as i know it’ll never connect to the trail when it terminates in Etna at the riverfront park by the 62nd st bridge. Sharpsburg has said that after James Sharp landing it’ll run on the street, a la blawnox, until it gets to Etna.

Re: Highland Park Bridge project in 12 year plan – as previously corrected above, but just to underscore: NOT the same as the Freeport Road bridge currently underway between Sharpsburg and Aspinwall. NOR is it the Rt28 widening project (whose scope does encompass the ramp cluster at the north end of HPB).

Dan Cessna mentioned at a meeting I attended 2+years ago that PADOT would look to address HPB after the two above mentioned projects (and by the way, my recollection is that PADOT considers HPB to include the south ramps and Butler Street towards Washington Blvd as all part of the same scope/complex).

In my experience with PADOT engineers, they value and will consider local input/feedback on this type of project. They have admitted they don’t experience these roadways and bridges they way locals do.

As OP mentioned, the need of local individuals and advocacy groups to bring deficiencies and/or solutions to PADOTs attention is great. Take every opportunity to let them know the shortcomings and offer practical suggestions.

I can’t find the brt thread.

PAAC reapplying for federal money to build BRT. Seems the hold up is the federal government and possibly specifically the current administration, at least from what the county executive said.

Hopefully much ado about nothing

Speed humps may be used to calm Grandview traffic

more details about the North Side/beaver ave project. Righ tnow the land is pretty much empty. But hopefully it also means that this developer won’t need to close to trail for several years (a la the strip trail)

info about the Four Mile Run stormwater mitigation and how it may affect (effect?) plans for Oakland to Hazelwood connection.
http://www.wesa.fm/post/pittsburgh-has-stormwater-problem-pwsa-has-plan-schenley-park

I would say that ‘affect’ is what you were looking for.

Thanks. This is one of those things that I’ll never learn no matter how many times I try to learn it.

so, wait. bikelanes from the GAP to the point are now back on? I’m confused.
http://pittsburghpa.gov/press-releases/press-releases.html?id=2284

someone help me. my peabrain is exploding.

Those will be welcome additions to the bike lane network! Connecting the GAP and Penn Ave lanes to point state park is a big deal.

As I understand it the Blvd of the Allies bike lane was nixed due to business owners wanting to retain curbside parking. The new route appears to rely on 3rd ave instead. Lane width is at a premium down there so i’m hopeful actual bike lanes are put in rather than just sharrows. If 3rd is going to get a counter-flow bike lane, that seems to suggest that it will lose some on street parking. The block by gateway center could accommodate a lane losing only parking on one side of the street.  The block to the east of that is narrower and only has parking on one side already. Hmmm.
Streetview: https://goo.gl/maps/nN9UZb9BZwx

I assume where it says “contra flow bikelane” it means that third ave is one way there and the way going with traffic gets sharrows and the way against traffic gets a bike lane like oakland?

Not really local news but don’t know where to put it.

The trib called it a “mishap.”

Pitt unveiled a 30 year master plan which has a lot of nods toward Peds/Bike safety and redesigning streetscapes.  Nothing is set in stone, obviously, but glad to hear that Pitt has made this a priority along with building more buildings.

Tereneh Idia: Biking Ain’t Easy
“I was afraid to ride a bike. So, when someone would say ‘easy as riding a bike,’ I would think: Who are you kidding?”

Are Complete Streets coming to your neighborhood?

Are Complete Streets coming to your neighborhood?

What’s the “new 3rd Ave” facility they are talking about?

PA may be able to put up speeding cameras and bill scofflaws by mail for speeding in work zones on turnpike and interstates per this new bill.

Trib trots out “area man” who gives the usual “this is the guvment trying to take our money!”

@eric – Here’s the details of the 3rd ave facilities.

“The new bike lanes will allow people on bikes to travel in both directions on 3rd Ave, between Smithfield St and Stanwix St. The 3rd Ave bike facility will include a westbound “shared lane” paired with an eastbound protected contraflow bike lane.”

To be implemented sometime in October 2018 I believe, for the first phase, which includes the 3rd ave contraflow lane.

The 3rd Ave lane is in and painted.  I am hoping that add a few bollards or something besides paint that helps drivers realize bikes are coming from the opposite direction.  Also a few spots might need a sign to look for bikes to the left when pulling out.

I will try and get a picture up this evening

Not really local but funny. Who needs a smart bike lock?

“A man is headed to jail after he allegedly threatened people on a South Side trail, sucker punched the responding officer, took his Taser, tossed it down a hillside, ran off and was eventually apprehended by a police dog Thursday afternoon. … The incident began about 12:15 p.m. when an officer responded to the Three Rivers Heritage Trail near the Hot Metal Bridge for a report of a man harassing a woman and threatening other people on the trail.”

took longer than anticipated, but here is the 3rd Ave. lane with traffic and a cyclist coming up.  Shot is from Smithfield looking towards Stanwix. 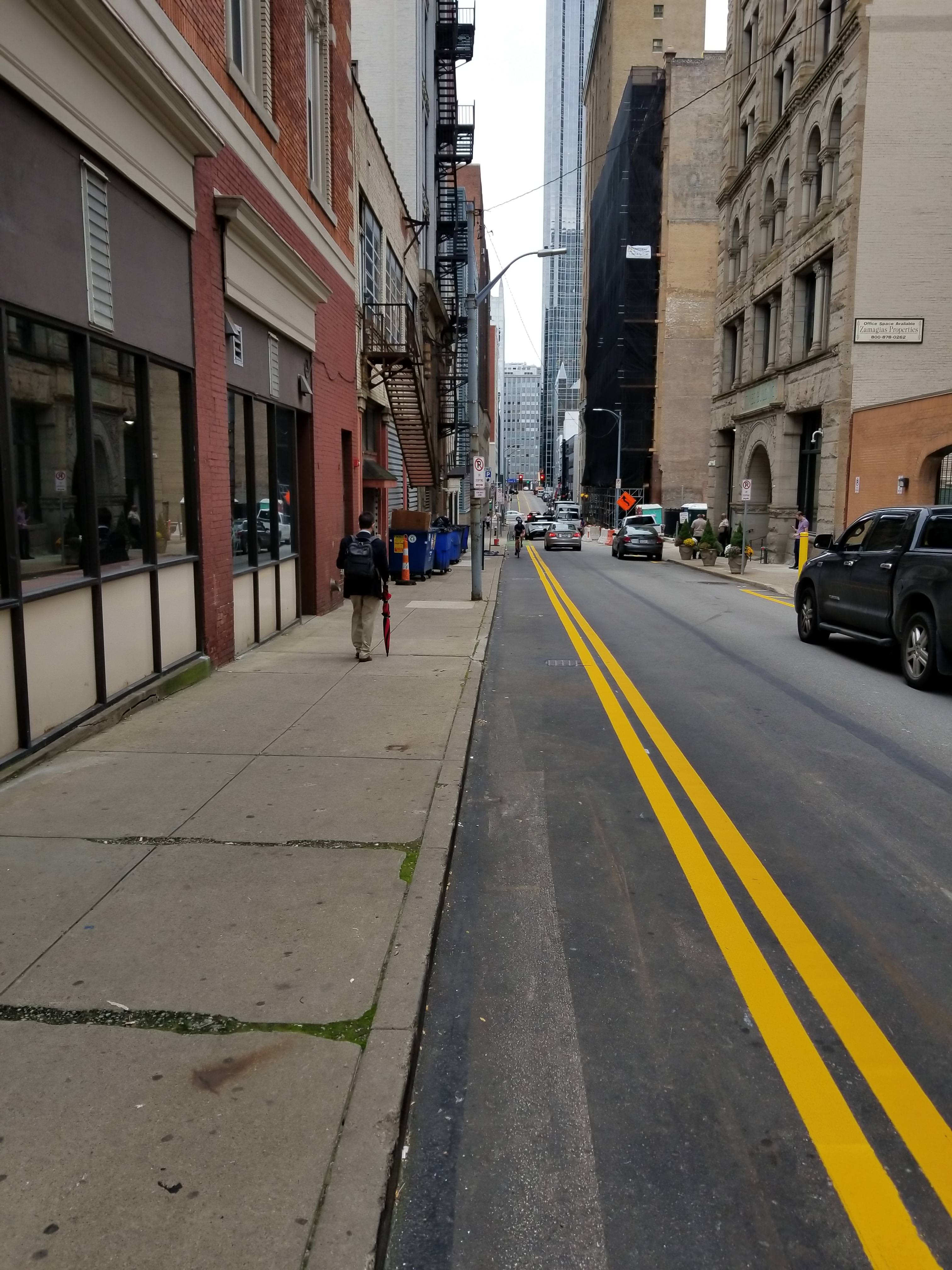 Nice. I’m going to ride through this evening and check out the new lanes. Looking good!

I like the use of yellow paint, but are there bike-only signs?  Otherwise it suggests that motorcycles (or really narrow cars) can use it.

I also worry that without separators that peds will walk off the curb looking the other way for cars and into a bike. The separators at least give a visual clue that something is different and to look out.