I won’t waste my time commenting on the Trib site, but will point out that there is a second bridge in that ‘hood that cannot be used. Wilksboro Ave, just off the California-Benton corner, the bridge is still there but blocked off from any use. It’s so well hidden you have to hunt to find it on either end. In fact, it was Tag #1255.

I’m hesitant to tell people about it in this era of Instagrammable hot spots in fear that somebody will fall taking a selfie and the solution will be to demolish the thing, but Wilksboro is one of the truly coolest relics I know of in the city.

another public meeting about hazelwood

doesn’t say that much that’s important as far as I can tell. Shuttle between Hazelwood and Oakland was mentioned as an aside.

BRT between oakland and downtown to be built by 2023. maybe.
cost also increased by $30M

I am too lazy to create a new topic.

I was sitting in a dentist office today reading one of those free magazines about triathlons and in it it suggested that you should apply wax or lemon pledge to most of the areas of your bike to winterize it. Has anyone ever done this?

I use Pedro’s Bike Lust, which is essentially a silicone “wax”, throughout the year. I don’t know as it’s heavy enough to protect against a ton of exposure to ice, salt, and sand, but I find it produces a nice shine and helps against general road gunk. For wintry conditions, I mostly just use an old beater bike.

Article profiling the GAP between PGH and w Newton.

An article about cycling the GAP trail as a black person. Where the writer tells his black companions in McKeesport: “So just so y’all know, once we leave The Port, we probably ain’t gonna see any more of us until we get to Maryland.”

Paul, I saw your comment under the trip article on the gap trail and I emailed the author last night and told him the same thing about the switchback.

My guess is that because the trib is all about saving money and having low journalist standards that this author never actually rode the gap trail but instead was pulling his information from websites. plus the fact that they do no copy editing or fact checking….

lengthy road closure for Commercial Street (Nov -> Feb) with ongoing work through beginning of may 2020 to build a huge wall to stop subsidence plus repaving.

12 rad grants approved including turning the downtown trails into an art Walk.

Classic Trib article about ghost bike/silent ride for Thomas haykin tomorrow. 1) no info on time when it starts, 2) anti bike trolling comment underneath.

city construction a “neighborway” under the Birmingham bridge to connect both sides of Wharton to allow peds and bikes better access to promote walking/riding.

I took the T to Dormont and biked along Washington Rd. to Castle Shannon Blvd. yesterday, so I was in that area. I would generally avoid the southern part of Pioneer Ave. As with most of the South Hills. getting there exclusively by bike is a real challenge. Public transportation such as the T and South Busway is basically a necessity when trying to reach any of those neighborhoods from points north of Mt. Washington. Brookline is accessible via the 39 Brookline bus as well as the Y46, Y47, and Y49 buses to Whited Shelter and a climb up Jacob St. You could also take the Red Line to Potomac and go towards W. Liberty Ave. then left followed by a right onto Pioneer Ave.

Exit South Busway at Central, the one immediately after South Bank, carry bike up either of 125+ steps, then you’re on fairly quiet streets and have conquered most of the elevation change. One side gets you to the end of Brookline Blvd, the other gets you to the very residential Glenbury/Aaron area.

That can be done as well if you don’t mind carrying a bike up the steps.

Austin was only 22, had a 2 year old that will never get to know him. That story was sad, and I’m kinda of shocked there isn’t even anything more for him on this forum. This forum did go down hill.

…pedal up hill a bit:

Dear @ShoeFlyPie, may I respond regarding Austin’s death, arrangements, and a bike community response? You’re absolutely right that it’s a tragedy.

It’s a complex tragedy. It presents one factor which I think we haven’t seen before. We usually only go big if the family concurs, and that discussion is still happening. People have lost a son, a fiancee, a dad – we don’t get to say, in three days we’re going to have a ghost bike ride just because it suits us.

There is a neighborhood leader looking into a ghost bike and placement and maybe a ride. BikePgh is doing the right things. These things all unfold differently and at different paces.

I guess my response fwiw is: people are working on it, it’s unusually complex, and maybe we should have communicated better.

All the best, VB 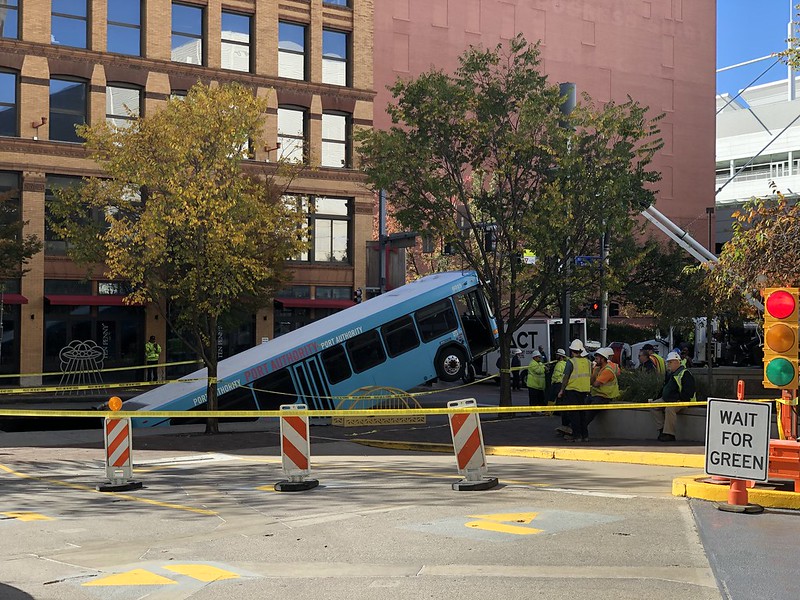 Regarding changes to the intersection of Perrysville and Mairdale in the Perry North neighborhood, a letter asks “who is more important: the handful of bikers or the hundreds of people who drive in vehicles every day?”

Eric Boerer of BikePGH talked about the Pittsburgh Bike Plan on KDKA radio (7 minute audio). Can someone that heard the call-in comments summarize them?

WPXI devoted 1:48 (that’s minutes and seconds) to the bike plan. Their story:

Maybe it would help if the TV videographer would shoot some video not just from a stationary tripod and from a car, but also from a bicycle, to help dissolve the us-versus-them division?

Davis Ave bridge to Riverview might get rebuilt, as a pedestrian bridge! (The old bridge there was demolished in 2009)

The author is from Carnegie. An appropriate response is:

When you pay taxes to the City, you can have a say. Else SHUTUP…dickweed. …or something to tha effect…

Also, I don’t think any of these venues are hurting for attendance…

And the Phipps bikelanes, though I feel are poorly placed…they are that way so as to preserve parking…

And the elderly shouldn’t be driving and parking anyway…they have free bus passes…paid for by our gamblers…and they’re mooching off the hardworking taxpayers via that Ponzi scheme called Social Security… … think soylent green…The New Green Deal.

“When you pay taxes to the City, you can have a say. Else SHUTUP…dickweed. …or something to tha effect…”

Would this also be an appropriate response to cycling advocates who do not live in the city?  Or is the implication that all cyclists who support bicycle infrastructure in the city are city residents?  Some of them might be “dickweeds,” whatever that is.   I do not have facts at hand to put forth, but my bet is that county, state and even federal money is used to construct and maintain the city’s roads.

Please attempt debate with others with information, not ad hominem attacks.

Thank you for your time.  Have a great day.

Kolo, I think you missed my sarcasm…and how do you know I was ever hardworking or a taxpayer… …so much for fact checking…

Do you realize that one need not be a taxpayer to vote or have an opinion, etc…that IS a fact.

Have a cup of cocoa with a marshmallow…

Positive development, we’re getting some Perry Highway bus service back. This will help my bike riding, because I’ve come to hate and somewhat fear riding on Perry, particularly near my house.

Single-occupancy-vehicle use is up, in Pittsburgh: 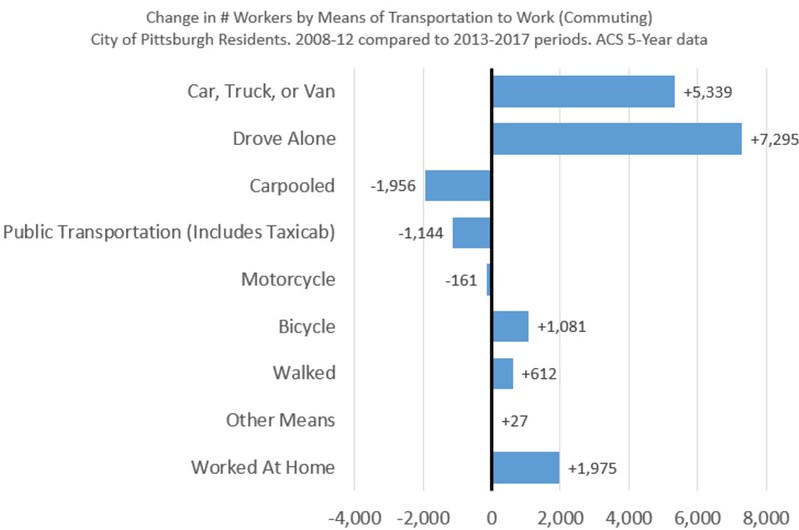