ICYMI: from Nov 12, not a cycling-related story, but the lead image is great:

Matt Verostek is a good dude.

There’s 11 new ones, in addition to the 5 that were installed last year.

Great write-up in the Trib about the new Cultural District artistic bike racks. It has interviews with some of the artists that give insight into their work, as well as a simple explanation of how the project came about:

“[Pedestrians] can’t see and they’re not looking. People absolutely do not pay attention.”

“[Cyclists] can be frustrating… We put up with the Triangle Messengers Downtown for years, but now [bike riders] are all over.”

“Drivers unfamiliar with Oakland add another layer to traffic strife.”

Interesting indeed. Apparently the problems and dangers on Oakland’s streets are everywhere but behind Port Authority’s wheels.

[ETA: I wrote a bit more on this, here: https://infinitebuffalo.wordpress.com/2015/11/25/windshields-are-surprisingly-effective-at-deflecting-fault/%5D

I don’t think the basic idea of the original letter is all that “pie in the sky”, but it is not going to be easy. I have been working downtown for over four years, and have not once driven a car to work and left it there all day. I bus, I bicycle (10 miles each way), I motorcycle, I telecommute. On very rare occasions, once or twice a year, I will get a car ride from a family member. My nearest bus stop is just under a mile away, since the 2011 transit cuts left me without the Perry Highway bus to ride.

To me, the basic issue others seem to have with _not_ driving downtown is a combination of not knowing how the transit system works — i.e., they couldn’t use it if their lives depended on it — and fear of being stranded, even for an hour later than planned. It further doesn’t help that so few of our suburban roadways are pleasant or safe to walk on. I’ve learned how through experience, but if scares the willies out of my neighbors to walk along Perrymont Road in McCandless on a dry day in July, imagine getting them to consider it in the dark in a snowstorm. All the time.

So until and unless you can figure out how to get 50,000 people to learn how to use the transit system, actually walk over a half mile to a bus stop in a 37 degree rain, and/or take the lane biking on roads like McKnight and Perry Highway, you are just going to plug up all the streets and parking garages in the city like you always have.

For many people, the out-in-the-suburbs end of the problem can be solved by using park-and-ride lots.

Another idea that’s been floating around is “park-and-bike” lots — like park-and-ride, but closer to the city and with bike lockers. For example, the Millvale Riverfront park has been (informally) used this way ever since the trail connected into the city, with people bringing their bikes on their cars. It might be possible to interest Sandcastle in such a use of their lot on weekdays.

New bollards installed along the section of the Chateau trail where vehicles frequently drive on the trail! Yaaaa!

Already, I’ve seen a few of them melted by vandals. BOOOO! 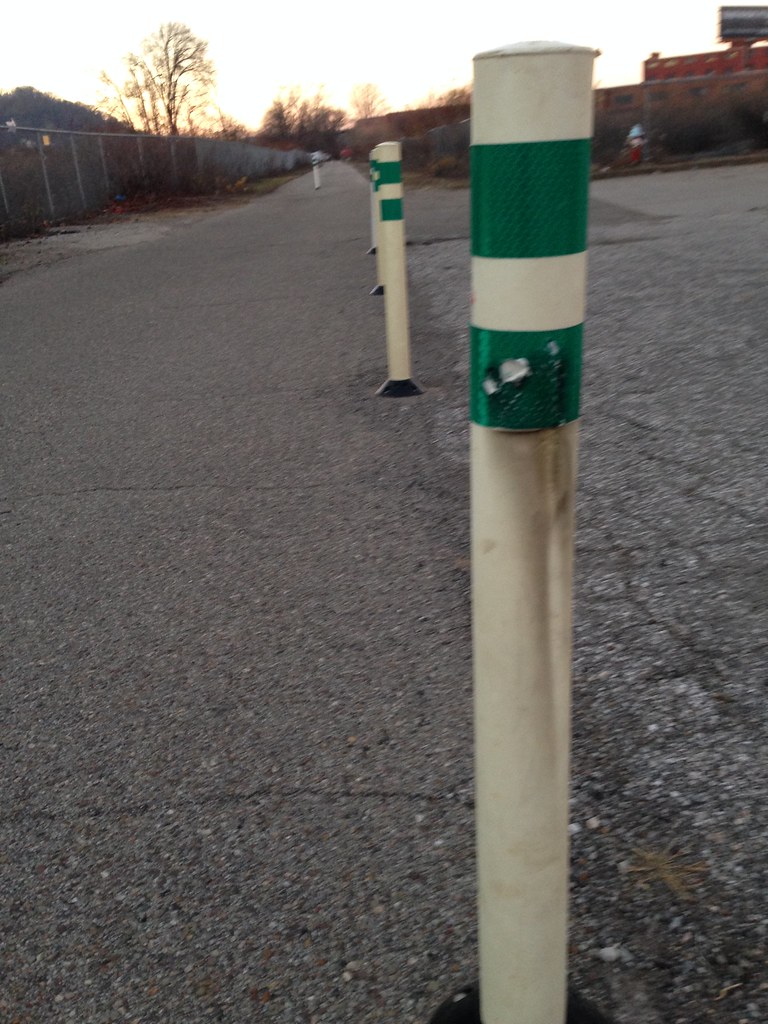 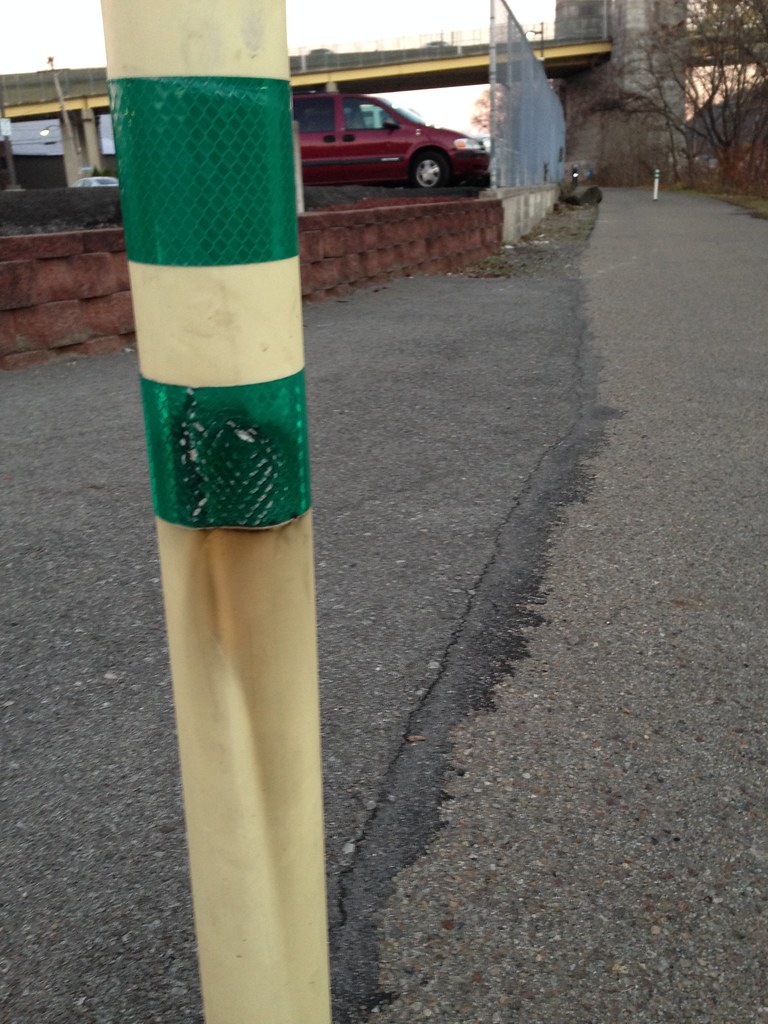 With regard to the suburban park and ride lots, they also become overcrowded with parked cars. At Washington Junction, in Bethel Park, there has been an ongoing project to increase the parking capacity of the lot. I would predict that once completed, this increase will soon not be enough capacity.

What I never saw addressed was improving pedestrian and bicycle access to the station. I realize that with this project, Port Authority is only taking care of what they can control. However, it is too bad that PAT, PennDot, and the Municipality did not consider and work together to improve access to the station via means other than the motorized variety.

Milford Drive and Route 88 are not good roads on which to walk or ride a bike. There are little to no shoulders and no sidewalks. If cycling, there is a bike rack at the station, but it can only hold a half dozen bikes at best. The bike rack is out in the elements w/o any protection from inclement weather.

Had the infrastructure and situation been considered from a “wholistic” viewpoint, with safe cycling/pedestrian approaches and a covered bike parking area with increased capacity, I would predict that more people would leave their cars in the driveway.

I agree with fultonco, a lot of our far out suburban transit needs to consider cyclists and pedestrians in their station design as well as work on improving streets near the stations to provide safe and useful sidewalks and bike routes.

Not sure any of these are bike-related, but maybe we could worm it in there somehow: Peduto’s looking for applications for open board seats.
http://pittsburghpa.gov/mayor/release?id=5453

Pittsburgh police say the man was hit at the East Commons crossing on East Ohio Street at 7:25 a.m. Monday.

Police Assistant Public Information Officer Emily Schaffer, the victim was a 43-year-old male bicyclist.
The victim, whose name hasn’t been released, was taken to Allegheny General Hospital in good condition and has since been released.
“The vehicle is a dark gray/black sedan with a black trash bag taped to the rear of the vehicle,” Schaffer said via email.
Missy Demchak, who lives near the scene of the accident, told Channel 11’s Courtney Brennan she thinks it’s a dangerous area.
“It’s pretty dangerous. I’d be afraid I’d get hit, too,” Demchak said.

Cyclist Brendan Linton says he and his father Jack learned that few police officers in Cranberry know the bicycle laws but fewer know the proper enforcement of them.

The above was spotted in https://www.reddit.com/r/bicycling412

Great idea! Give a Bike Pittsburgh Membership as a gift.

There’s also a mention about future plans to connect them all the way to downtown.

Wow, I saw a video of that guy and I encountered him on a country road once. He was in the middle of the road waiting to cross RR tracks at a 90 degree angle. Cars weren’t giving him enough room. I stopped and waved him to cross the tracks which were at an angle. He proceeded to then cross the tracks and then took the entire lane. I was okay with that even though there was room for him to move over. I followed him for a while wondering why he was riding in such a way. Believe me, he wasn’t riding in a normal fashion. I was concerned for his safety to be honest and pulled up alongside him and told him, I worried about his style of riding on these roads. He gave me the finger. Keep in mind, I stopped to let him continue and gave him a ton of room. Sure I gave my opinion, but I really was worried for him, especially out in the country with the nutty pickup truck people. I sort of liked what he was doing in a way, but still all it takes is one nut to run him down.

I don’t think he has some financial motive. I think he was riding okay by the letter of the law and in hindsight, maybe I should have just passed him and waved, but I couldn’t help but to worry for him. Ah well.

I think what you are seeing here is an example of why the Tribune Review is not a quality paper and why, actually, it’s a bit of an embarrassment to local journalism.

A conscientious reporter might have asked the prosecutor to explain on what basis, exactly, he was asserting that Smith had a “financial motive” for riding erratically. Was there evidence? A professional reporter might even have made the effort to contact Smith and ask him to comment. Casually cruel slander is easy; but a bit cowardly, don’t you think? And it’s a pity that Westmoreland Country does not seem to encourage a clearer sense of professionalism in its public servants.

I don’t know Smith, but from what I read I get the feeling that he’s a disturbed individual; that he happens to be on a bicycle seems incidental to the case. But I guess he’s a handy proxy when it comes to complaining about all those uppity bikers clogging the streets.

I agree the Trib is an embarrassment in this story and it looks like they are just reporting something anti cyclist, which is par for the course. The Trib is a joke and they wonder why no one takes them seriously.

Anyway, my encounter with Smith didn’t leave me feeling he was “disturbed”. He just seemed to be someone that wanted to educate others on the letter of the law. He did nothing wrong when I encountered him. He could have made things easier for others, BUT he was well within his rights. Of course my encounter was brief, so I am not going to claim more knowledge of him than what I was exposed to. I sort of wanted to talk to him more, but he seemed angry at me, so I moved on. I guess I could have handled things better looking back on this, but I make plenty of mistakes ALL the time, so what else is new?

I’m pretty sure this is the same guy who set up at the last couple of Try-A-Bike days. If I hadn’t just dropped $20K into a roof and furnace, I’d be very interested in these, complete with a solar panel or two.

Yep, that’s Adam of ASR…he has indeed been at Try-A-Bike for the past couple of years.

A broad (somewhat shallow) discussion of how to reduce the number of pedestrian and cyclist deaths. Mentioned are: lights in the asphalt at crosswalks, fences to reduce jaywalking, more traffic signals, adding sidewalks and bump-outs. But no mention of speeding!
http://triblive.com/news/allegheny/9584620-74/pedestrian-traffic-deaths

From the article:
“For drivers, it’s important to remember to slow down, Luther said. “

Pittsburgh is an OK place to be fit:

[…] staff analyzed 24 metrics covering data such as the number of sporting goods stores, golf courses, fitness centers, playgrounds, fitness trainers and little leagues in each market on a per capita basis. It also factored in the average cost of various activities, such as fitness club memberships and bowling.

Maybe biking (and hills) is somewhere lower down on the list…
Bowling might work, but it would have to be the Rock ‘n’ Bowl. Which, sadly, is not in Pittsburgh.

Drivers not yielding to pedestrians. Some interesting discussion in the comments about how things work in Europe. http://www.post-gazette.com/opinion/letters/2016/01/06/Drivers-create-perils-by-not-yielding-to-pedestrians/stories/201601060108

Mr. Kraus, 61, who first took office in 2008, said his personal focus in 2016 would be legislation involving “mobility,” which could take the form of a new look at the city’s residential permit parking program and regulating pedicabs, among other initiatives.

Got hit by a truck while riding my bike to work yesterday near the intersection of Penn and Braddock around 3:30pm.

You collected the pieces of my bike from the road and took them with you.

We should and we do.