From Friends of the Riverfront FB page…

This meeting will allow the public to view plans for the proposed five miles of shared and dedicated bike lanes to be installed along Grand and Neville Avenue and ask questions.”

Whoa. This came out of nowhere! It’s great that they are considering this. Most of the bike commuters that I see on Neville Rd usually ride on the crappy shoulder,which is understandable, as motorists usually laugh in the face of the posted 35 and 25 mph speed limits on that road (This includes that PAT driver on the 21, whom I once saw clock 70. Yikes!)

actually, it comes out of years of effort (not by me!)
this is kind of a major connector.

In 2016 Montour Trail extends through Montour Junction and both sides of the Neville Island bridge. Also maybe in 2016 the ORTC gets shared-use markings and lanes to the Sewickley bridge.

and then there’s just all sorts of connection going on.
I blame Sara Walfoort and her posse for this.

While I’ve never had any issues riding on Neville Island, I think this is great news and is a sign that progress is happening all over the area.

Lots of kudos to those working on this.

Good to see.
I don’t use this road when there is high traffic, but I can imagine how awful it must be with trucks on that road.
There was a time where cops were nailing speeders.
The only thing that sucks is that it can be a little unpleasant to even get there.

I’m not trying to defend speeders on Neville Island, but to me it’s the perfect example of how street design encourages bad driving. Grand is so wide open that driving at 25 MPH feels like a crawl. This is especially so if you’re coming off the highway to get to Coraopolis (as there is no Coraopolis exit on 79-S). There’s two very wide (14′?) lanes in each direction, plus a parking lane on each side. That whole stretch could use a road diet.

I should note that the bulk of my experience on Grand is on the stretch from Coraopolis to the 79 entrance/exit, so the experience is probably different where it narrows to one lane in each direction.

@doublestraps, the faster traffic is usually found on the other side, particularly on Neville Rd. Cops sometimes park themselves on this road, but it’s usually in the section where the speed limit is 25 mph. Once it goes up to 35 heading towards Pittsburgh, they don’t have much presence. I used to drive on this road at 35, and pretty much every other driver passed me. But, like you said, you have a 4-lane road with wide shoulders so the fact that people speed is not surprising in the least

I came across this old picture from the residential stretch of Grand Avenue. Can somebody say “road diet back to this level”? Bike lanes can take the former RR space with room to spare!

I attended this meeting on Neville Island. It seems like they have a good handle on the project. What surprised me was their timeframe: work begins June or July 2016, work complete end-of-August 2016. That’s earlier than I expected.

This shows the layout along the lengthy 4-lane straightaway

They were asking people: how would you prefer to have the bike lane and the car lane separated? Option1: painted 2′ buffer, Option2: 1′ rumble strips. Either way the bike lane would have street markings (boundary stripes, bike icons)

Not within the scope of the meeting, but a topic of speculation among some attendees: status of the Neville Junction project, moving the Montour Trail from Groveton to the Neville Island Bridge, and whether or not the Coraopolis sharrows project was shifting it’s emphasis to Third Street.

@Vannevar, where does this arrangement for Neville Rd begin? This road intersects with Grand Ave twice: first near I-79, and then near Neville Chemical. I’d be great if it was the former, but if it’s the latter, do the bike lanes then continue on Grand Ave all the way to I-79?

Also, what happens to the existing shoulder on Neville Rd? Is that were the bike lanes are going to be, or are they narrowing the road lanes to accommodate the bike lanes? The reason I ask this is because people, such as myself, walk on the shoulder of Neville Rd to get to and from the bus stop near Neville Chemical. Also, that shoulder is not in great shape and is usually full of dirt and other crap.

Grand will be sharrowed, and Neville will have the separated lane (with or without rumble strips). It’s supposed to run the entire length from Coraopolis Bridge to Fleming Park Bridge, with bike lanes on both sides. Proposal calls for narrowing Fleming Park Br. to a single lane, with a buffer zone painted on to compensate for wide turning trucks at the bend. The Neville Road protected lanes will be on the current berm space.

It sounds like the design options are pretty well thought out. I don;t know whether I prefer a wide painted buffer or narrower rumble strips. I like the idea of rumble strips, as they provide multi-sensory warnings of encroachment into the protected space, but as a cyclist I prefer NOT to have to interact/parallel/cross rumble strips. But, I think I prefer the multiple warnings they offer. I just hope that the design of cyclist access to the protected lanes is well designed and implemented as well.

Thanks for the summaries of the meeting, Vannevar, Smarchit and others. I would have liked to have been at this one, but I had other commitments. Dang holidays!

I chose the rumble strips after confirming that there would still be paint marking the lane and cyclist icons. I figured, a driver with their head down in the cellphone would be more likely to have their attention gotten by the rumble strips.

To be clear, these are foot-long rumble strips painted outside the bike lane, and not the shoulder-wide rumble strips.

I’m not sure if I like rumbles or not; but if they do put in rumbles they should make them bike friendly by leaving gaps so you can get in the travel lane if needed.

League of Am. Bicyclists PDF
http://www.advocacyadvance.org/docs/rumble_strips.pdf

My hesitation for rumbles is that even if they are installed correctly, they tend to capture gravel and other debris. This wouldn’t be an issue if we had regular sweepings of the bike lane, but experience tells us that this will rarely be done.

———————————–
I don’t want to sound like a Debbie-Downer.
I do think that this bike accommodation is a wonderful thing, and I am appreciative of everyone’s efforts.

Even better news for riding on Neville Island: http://powersource.post-gazette.com/powersource/companies/2015/12/17/DTE-Energy-close-Shenango-coke-steel-plant-Neville-Island-Pittsburgh/stories/201512170168

Looks like this project is moving forward in the next month! Contractor Notice letter sent out to residents. https://goo.gl/photos/5uL81n8YAbd2j8ks7

Work has begun on this project. Right now, there are crews working on improving the storm drains along Neville Rd. Per the PG traffic news article, work is scheduled to be completed in mid-May.

In the past few days, the outside lanes along the entire length of Neville Rd have been narrowed, a buffer zone has been painted, and primitive bike lane markings have been laid down in both directions. They are still doing infrastructure work. The lanes could use a good cleaning in many spots as well (This ongoing need is one of my bigger concerns, given the heavy industrial usage the road gets). The crews haven’t done anything on Grand Ave yet, where I believe the plan was more of a sharrow system. 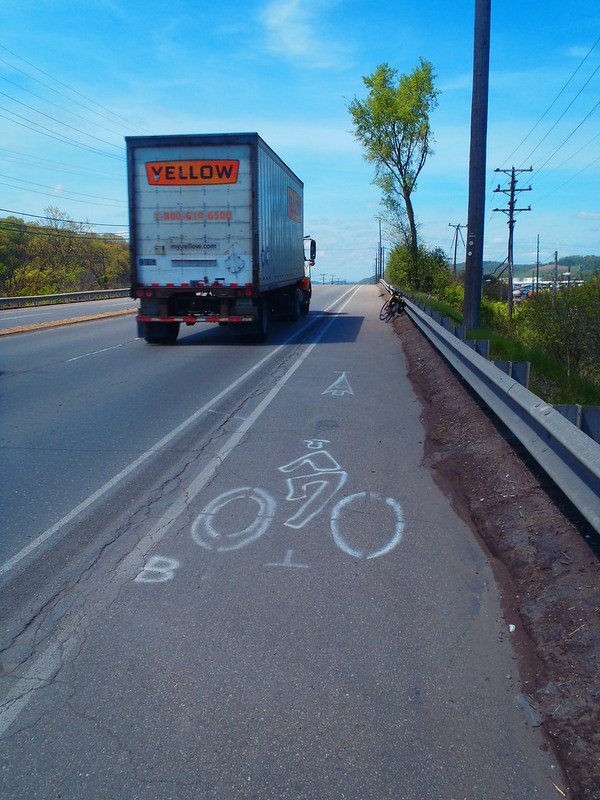 Take the lane or get pinched in the parking lane! Thanks for the offer, but given the option of uphill lane with poor sightlines, or sidewalk, I’ll cross right and take sidewalk every time Sidewalk is much more appealing. Quality signage to alert drivers that are exiting the interstate onto 25 MPH Grand Ave.

There is one piece of signage near the Fleming Park Bridge end that is baffling. This is just a small concrete railroad overpass. I’m completely clueless why anybody would need to dismount here! This is two months later than planned, as it was originally scheduled to be reopened late this month. The cause is a new one for me: a nearby railroad didn’t have a full time flagger during the first two months of the project, which limited how much work the contractor could do.

per the PG the bridge is opening “this week.”

Regarding Fleming Park Bridge, the press release says “When the bridge reopens, it will have a new lane configuration. Instead of four lanes of traffic with two lanes in each direction, there will now be a single lane in each direction. That change allowed for the addition of a bike lane on both sides of the bridge.” Progress!

As noted in another thread, the Fleming Park bridge has been reopened. It has well-marked, bollared bike lanes with some fresh kermit on the island side. The transition at the Stowe end of the bridge (coming from the island) is not marked, and the bike lane just kind of ends. However, I don’t think this is major issue, as speed on the bridge has been slowed down, and there’s a 4-way stop on the Stowe side of it.