Hi – I’m new to bikepgh but not new to Pittsburgh – my wife and I moved back to the city recently. I commute from point breeze to oakland via wilkins/beeler/forbes. The addition of the counter-flow lanes on forbes (at least they weren’t here when we moved away) has been great, and I’ve been excited for the new lanes on forbes between craig and margaret morrison that they just put in this last weekend.

However, it seems like the new lanes make that stretch more dangerous now when the buses are in the pullouts – I’m squeezed in the bike lane between the buses (which don’t always go all the way into the pullout) and a single lane which might have a car (who frequently think that because someones in the bike lane, the 4 foot rule suddenly doesn’t apply). Before, I had an entire car lane to take over without blocking traffic so I didn’t get sandwiched.

I’m curious if anyone has thoughts on what to do here. Take the car lane if there’s a bus in the pullout? Suck it up and hope for the best? I’ll try to take a picture on my commute this week.

I agree with your concern about cars relaxing the 4 foot rule when you are in the bike lane. Happens to me all of the time.

There are several bike lanes around the city that I refuse to use (Friendship comes to mind). If you think something is unsafe – position you and your bike so you are safe, if you inconvenience some cars for a few seconds so what. Be safe!

I will reserve judgment on the new lanes until I see them, ride them a few times, and gain some first-hand experience going both directions.

But I will restate my general rule: Don’t let paint think for you. Whatever you think is safe, do that. Be unafraid, be visible, signal your intentions, and be beyond question in how you function in traffic.

Really appreciate the advice. I have no problem taking the lane when there’s no bike lane, but Im definitely too hesitant to take the car lane when there is one. I’ll try being more assertive on that stretch.

Thankfully, I didn’t have to pass a bus in the pullout on my way home yesterday and the lanes were great – definitely an improvement when you’re not dancing with a bus.

You can also wait for the bus to pull out and back into traffic. That would probably be the safest option unless there are parked cars along that stretch of Forbes Ave. Trying to pass buses is not usually a good idea, you should give them their space.

Today, I rode from Wightman St. to Bigelow Blvd. and recorded video of it. I’ll cue the video to where I was approaching Margaret Morrison St. since there was a snarl up involving some buses just as I pulled onto the sidewalk to let the buses pass me.

What about the parked car at 8:32? What would be the reason for having a traffic light facing the contraflow bike lane here at 8:42 where all cars must turn right? Is it to protect pedestrians in the crosswalk and cyclists turning left from Schenley Dr. Extension? BTW, what’s a “shitshow”?

FWIW – If zzwergel’s video illustrates OPs concern adequately (bus in bike lane – what to do) – then it’s pretty clear that if the line markings are “hashed”, it is expected the operator (the cyclist) may travel into the traffic lane to avoid obstructions (ie: buses).

PS: @eric: great call on the “shitshow” there – I wish that whomever planned those improvements (ie: the turnout that is there is intended to prevent just that sort of traffic blocking, right?) could see how PAT is using/misusing them, and making a mockery of the infrastructure. What is the f*ing point of building the thing if the bus drivers are going to be so completely half-*ssed about it?

PAT has always been half-assed about it. Those curb cuts have been there forever and unless it’s say, the 28X laying over, they’ve never adequately pulled into them. I’m sympathetic to the drivers – -they want to get in and out quick. It’s faster for them if the butt of the bus blocks traffic so they can quickly pull out and get moving. If not, they may be stuck there for 30-60 seconds after discharging/picking up before they can get back in the flow of traffic.

IF i remember correctly the same thing happens further down on fifth ave in front of old childrens.

They should have used “bus islands”, like those pictured below: 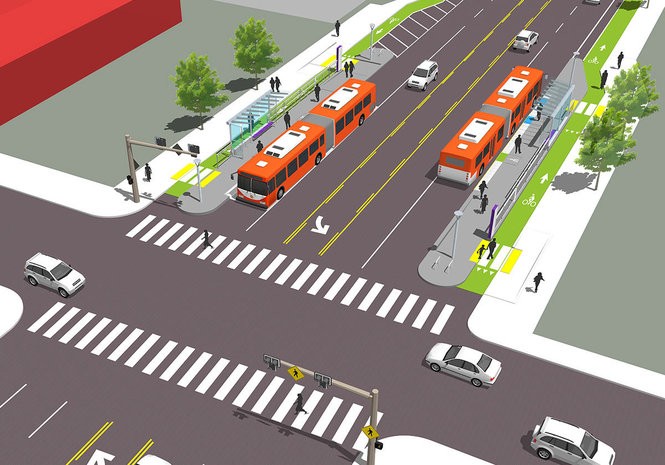 I did not know about the lmgtfy website. That’s fantastic! (LMGTFY=Let Me Google That For You)

Ah, the stuff you learn on this message board! Still!

is there a climbing lane on the other side of the street?  going downhill was never the problem.

I rode the lanes yesterday and they worked for me. There was a tweet to the Port authority account complaining that bus drivers aren’t pulling all the way in to the bump-outs; maybe that’s the problem. If it is, just get the bus number and time and tweet it to their account and they’ll let the drivers know.

I’ve used the lanes several times now and I like them a lot better now that I’ve gotten used to them. Downhill, there’s none of the competing with cars for space, and uphill I don’t have to negotiate the two-lane change to turn on Beeler; I just use the turn box at the intersection instead. It’s a cleaner solution that feels much safer.

The uphill lane is a god-send. Exactly what I dreamed about when I commuted through there 5 years ago. Rode it the other day. To go from memories of the high-speed, chaotic nightmare it used to be from Bigelow to Margaret Morrison and have a relaxed, pleasant, safe experience on my way through there was transcendent.  Well done.

Speaking of Shitshows, I think this is a shitshow.