I bought myself a new toy last week; just finished building it up. 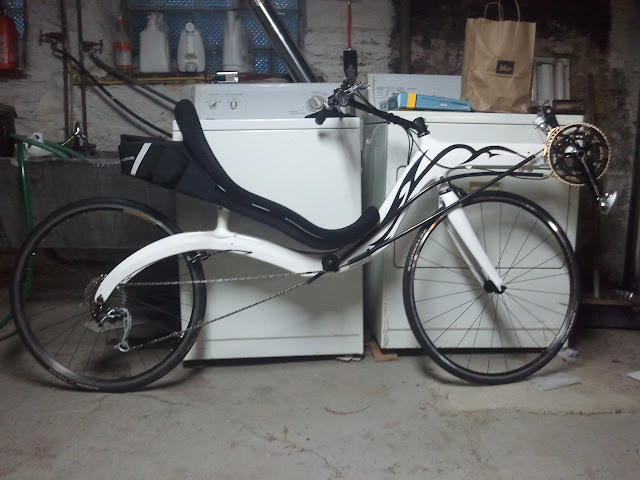 ‘Twas well used before I acquired it, so I can blame the paint job on the former owner. That said, Velocity sells Deep-V hoops with matching graphics…

You can get a matching arm band tattoo in a number of places around town as well.

can it make it up canton?

Is that chain running through a housing? I think that’s bent.

@hv: It might be able to make it, assuming I throw it hard enough.

@marko: Yeah. I’m not sure about the chain tubes yet…they seem to work ok, but I might take them out in favor of a couple of idler wheels instead. The serious curve is on the return side of the chain, so no real pressure producing friction…at least the power side is mostly straight. Things get a little funny with chain routing on these bad boys; for track, you can just drop the return side and not worry about the chain hitting the wheel or fork on turns, but real-world road riding requires a bit more clearance.

It looks really fast next to that washer and dryer (insert snarky emoticon here).

@ALMKLM: I would have used the other side of the basement, but I figured no-one wants to see my Gimp suit collection.

You mention the new ‘bent was used… who’d you purchase it from, Zed?

Regarding Canton, will the larger (read: normal) front wheel help you keep the front end on the ground? I mean, that’s the largest issue, right (though I think doing the first wheelie up Canton on a ‘bent would be a worthy goal, too)?

That thing is cool.

It looks like your butt is far ahead enough, and low enough, that a steep hill might be do-able. That’s pure speculation though, obviously you need to try it.

Is the rearward length of the handlebar at all disconcerting, does it have a rudder-y feel, or is it ok?

I think I ate a melted creamcicle out of a bowl that looked like that bike. So I guess the bike looks yummy to me.

RE: climbing Canton and suchlike. Just gonna have to try it and see what happens. Hopefully, the longer wheelbase and larger wheel will help…if nothing else, the larger wheel may pogo less on the brick.

I am concerned that the greater seat recline may cut down my effective power output on the steeps, but, again, will just have to try and see what happens. I’ve not yet had it on anything over 12% or so.

The steering is weird…massive tiller. Nice at speed, as a very small adjustment translates well; low speeds are a little more finicky.

In general, the steering/handling was designed to be happiest when pushing pretty hard; it’s the first bike I’ve ever ridden where I noticed more pedal steer when spinning than mashing.

It would be faster if it were yellow. Where are the Zipps?

Where are the Zipps?

Likely hiding in a corner, quivering in fear at the thought of my fat arse taking them for a spin over “typical western PA roads.”

Dan, have you ever ridden a bent with front wheel drive? I’ve seen some but never tried to ride one. Seems like it would solve a lot of issues with chainline.

sometimes, but not necessarily.

Cruzbike does FWD ‘bents (conversion kits for mountain bikes, as well as off-the-peg ‘bents), and seems to be gaining some ground. I’d love to try their Silvio(road) or Vendetta(time trial) models.

@mark: There are not a lot of RWS ‘bents. There are a few that use lean-steering instead of a pivoting wheel; most FWD bents either just let the chain twist, or have the bottom bracket move with the front wheel/fork assembly.

It looks crazy fast, but that I think you need an Affliction to go with it. Are you riding that on CTC?

I love it! Nice bike.

Ps- your basement looks a whole lot like ours. Do yu have a Pittsburgh toilet?

@nick: CTC will likely be the old P-38: got all the lights and dynamo hub and cargo and whatnot already worked out for that one.

@stef: I used to. In fact, that lighter patch of concrete near the wheel marks where I took out the wall enclosing said Pgh potty.

My Pittsburgh toilet has no “h.” By design, not from wear.

Talk about derailing a thread.

have you come down with an HPV?