Nearly 30,000 spots were snapped up in less than three days. It looks like there are a few VIP and charity spots left. http://www.bikenewyork.org/rides/fbbt/index.html

Also, you can always look on Craiglist in NYC in April and grab a spot from someone that can’t make it.

That’s pretty awesome. And I’m sure you two are thinking what I’m thinking. Bring it on home.

Pedal Pittsburgh is great, but the real draw of the five boro ride is the streets are closed to all traffic except bikes. It’s pretty rad.

Whenever I’ve ridden Pedal Pittsburgh, I’ve always had the nagging feeling that it could be much bigger. Then I just kind of assumed that it was as big as CDCP wanted it to get.

As I think about it, there is probably not another organized ride/tour that disperses riders throughout a city on a wide variety of routes, so you never really get a sense of how many people are riding. But it’s pretty damn cool and unique anyway.

CDCP could probably get it listed on the Ohio Cycling Events Calendar, there are scads of people over there who would come over for the ride. http://www.ohiocycling.info/

I work at the CDCP. Last year, as quizbot mentioned, we had a little over 2500 riders, which blew our previous record out of the water (it was somewhere between 2200-2300). We would love for it to be even bigger, but I’m not sure how that would be possible. It’s already far bigger than any other ride in the area. We do a lot of advertising and this year are going to work to make it more strategic. And thanks for the calendar tip, but we probably had it listed there last year; we try to hit a lot of cycling calendars.

rosielo, when is Pedal Pittsburgh this year? It would be good to have a tentative date so we could plan other bike events around it.

rosielo, I didn’t mean to imply that 2500 was not an outstanding number of participants, I think my perceptions are pretty atypical. Growing up in Ohio, I did the TOSRV every year, which would get 3500 entries within about 2 weeks before they would just cut off applications. And there were probably a half dozen other weekend rides in Ohio and Indiana that would get 500 to 1500 riders easily. But as I said, those types of rides put all the riders on basically one route so you’re always in a mass, and PP disperses people all over the city.

Also, this is purely my completely un-scientific observation – I feel like I don’t see a lot of riders from other states on PP, like the crazy ass hard core bike tourists, it just has a more local feel. I don’t know if that is something you would want to change or not, if you would want it to have a more national appeal, like get on the Bicycling magazine ride calendar or something like that.

rosielo, also, if you haven’t already, find out how to get PP put on an Adventure Cycling’s email blast, “Bike Bits”. It goes out twice monthly and lists events just like PP.

It’ll be on Sunday, May 22 this year. Hopefully our website will reflect that soon enough.

Sorry if I took the wrong tone and sounded hurt! I know you weren’t meaning to disparage the ride or anything. Thanks for your perspective, it’s great to hear.

You are right about riders being largely from Pennsylvania. Like I said earlier, we do list it on other states’ biking events calendars, but we still end up with probably 70% from PA. Honestly, I don’t think we mind if we change that or not. We love getting a big turnout, and are happy that people like seeing the city. I would say the demographic that we cherish the most is people who don’t usually do rides. We are happy to be ‘a ride, not a race’ and show off the city to a variety of people who like to ride bikes.

Yay for both 5 Boros and Pedal Pittsburgh! I’m going with VO for the former and planning for the 60 mile option for the latter.

Glad i got a spot with VO. I feel bad that i kept asking them over and over if there were still spots with them but glad i did.

As far as pedal Pittsburgh, i love it! I usually do the 60 mile and by the time i get to climb up mt washington, i am going pretty slowly. Lots of hills.

Btw i almost left a tag for the tag-o-Rama thread at the corner of 16th st and Penn under the pedal pittsburgh arrow sign that has not been taken down.

I’ll probably be working for VO… i will be very gently tucking y’alls bikes in with a nice blankey and pillow for the long ride… and driving. 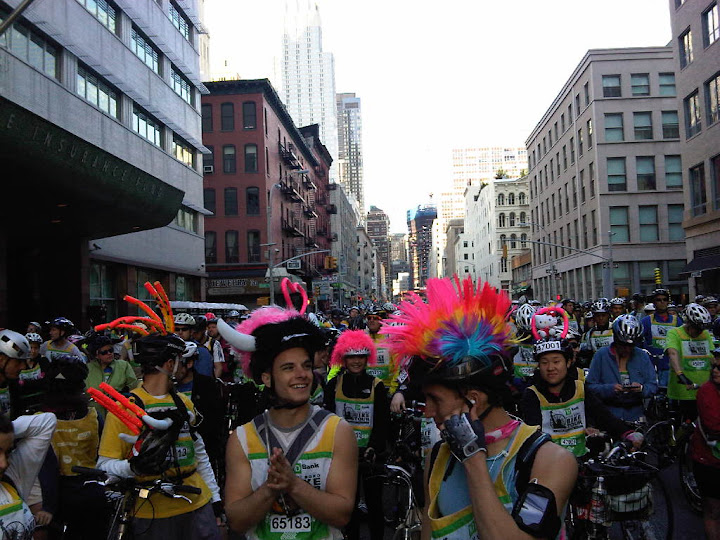 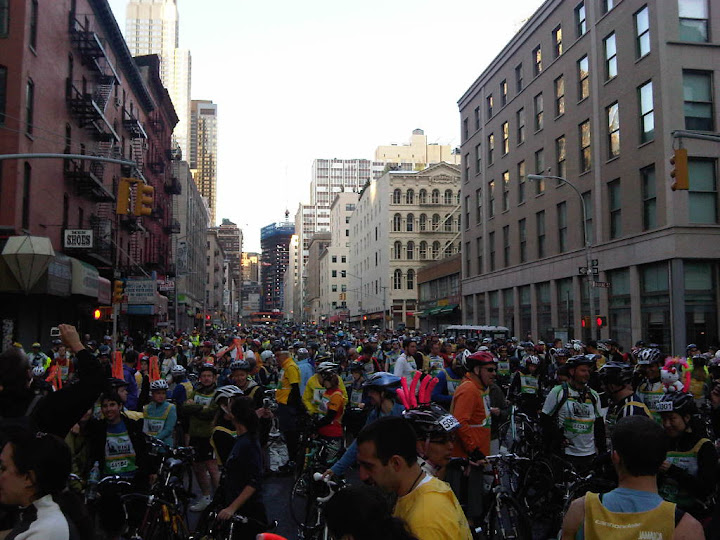 This was a super fun ride, despite the NYC traffic authorities causing a far-worse-than-usual (according to folks who’ve done this ride several times) bike jam at a few pinch points on the route. A large percentage of riders got in a 2-hour crawl of dismounted aggravation on an elevated freeway from which there was no escape, meaning no bathrooms, water or shade &tc. It almost killed the experience for me, but fortunately, the crowd stayed fairly patient, things eventually cleared up, and this really was a heck of a way to see the city. I thought Venture Outdoors gave some great advice about the ride and that their price for registering you and getting your bike there was very reasonable & I’d do it again, whether I end up using their recommended hotel or not. I’d love to see a lot of people coming from out of town to check out Pittsburgh for a ride like this. There were definitely all levels of ridership going on, and some tragicomic moments. Hopefully a few others will elaborate. I got to see a ‘bent dressed like a banana. Lots of African American riders, lots of tandems, lots of decorated helmets. Kind of a ridiculous amount of mountain bikes, and some serious bike bling mixed in with rattling department store bikes.

The rest stops each had about 6 banquet tables lined up and stacked about 9 inches deep with piles of bananas.

Now imagine that whole mess in Montreal, in French, and with tables of artisan cheeses in place of bananas, and that would be the Bikefest.

I had a more pleasant experience on the ride, I think. I am glad venture outdoors had us line up between 6 and 6:15am. I am guessing there were 1000-2000 riders lined up in front of us (I was not tall enough to see, but others were saying there were two blocks of cyclists ahead). There were a few stoppages for a minute or two as we approached central park, since the lanes narrowed. We also got stopped periodically for a few seconds to let peds cross the street in the park. On the main roads in manhattan, there were some brave peds that would run across the street and dodge the line of bikes coming at them.

Our pace was about 10-15 when we got to sections where things spread out on four lanes. It was very very flat and it was the easiest 42 miles I have ever done, and the longest distance single ride my single speed has seen. At the pace we were going, it was slow enough that we were able to look around and enjoy things, but I think no matter your speed, in a crowd with riders of varying bike-handling skills, you had to be alert in order to avoid any mishaps. There was a bridge that was a gradual uphill for about maybe a half of a mile. Before we got to it, we over heard some guys with really nice bikes (who looked like they knew what they were talking about) telling people that the bridge was a killer. It was maybe half the grade of the Bloomfield bridge. It made me realize how hilly Pittsburgh was, and the thought crossed my mind that I could see how the hills alone around here would deter people from commuting. People were struggling on that bridge, and I am willing to guess the riders from Pittsburgh had no difficulties.

We did get stuck at the pinch point for maybe 20 minutes? So we lucked out. I wouldn’t mind lining up even earlier in the future if I am able to do this again (and I really want to!). Like pseuda said, it was amazing to see the city that way. It was quite windy on staten island. The ferry ride back to manhattan was awesome.

Again, i am really jealous of the bike lanes. I did not hear one motorist yell or honk at a cyclist. The cyclists seemed carefree on the roads in traffic. No cars were riding in the bike lanes. We did some road riding and took some of the separated shared bike/ped lanes. Loved it. so many people utilized it. Only annoyance was on the brooklyn bridge when peds were walking and standing in the bike lane to the point where I had to yell at people to move because i couldn’t go anywhere. I didn’t have a bell. Also of note was the free bike map i got at the end of the ride.. The front cover said “now with 50 miles of new bike lanes!”. FIFTY! I can only hope that Pittsburgh continues to move in the right direction.

I had an amazing time. I was up at the very front of the line so I did not hit any of the choke points. (but I heard from others it was really awful. I got to the Festival at 11 and it was just a fabulous day. I came in a day early and spent Saturday riding in Manhattan. I cannot tell you how excellent the bike lanes and paths are in NY. I made a full lap of Manhattan mostly on lanes and paths. NY is now my favorite city to ride in. It really was great