I wish wish wish i were in town to go to this, but you should go. You Really Really Should.

Rider Registration: At the festival from 8:30 to 10:30 a.m. The self-guided ride is included in the price of the festival admission fee ($5 for one day, $8 for the weekend) and includes a map of the ride, marked turns on the roads, and a rest stop.

Paw Paws are the only native fruit to this area (well, all others were brought here by humans). Paw Paws are awesome, and planting them will save the world (ok, maybe not, but they are very cool). Unfortunately, that’s the same Saturday as the Dragon Boat Festival, where my kung fu school is performing lion or dragon dancing. But I’ll be headed to the Paw Paw festival that Sunday, if anybody wants to carpool – I don’t know if I’ll be taking my bike, maybe just in case if I can find a rack.

The poster image above self-updated, so correct info!

This 55-mile road ride starts and ends at the 2012 Ohio Pawpaw Festival, taking you from Albany on a circle tour around Zaleski State Forest. Enjoy challenging climbs, ridgetop views and sweet downhills, all along the Raccoon Creek Watershed.

So now I need some. Where can I get some around here?

I’m assuming this is Saturday, Sept 15?

It doesn’t seem to list the date of the ride anywhere I can see.

YES! Sorry, the ride itself is 9/15. I went through so many links I didn’t notice that the date wasn’t on where I ended up.

Doesn’t this depend on how you define fruit? biologically, there are numerousn fruiting bodies that can be eaten by animals, including humans. Acorns come to mind, although you may say they are a nut, which would be a subset of a fruiting body. Berries?

A guy from Phipps told me they aren’t native to this part of the country. They were wiped out in the last Ice Age.

somewhat relevant, as Andy posts here sometimes, and many people know him. It’s already reached the goal, but the more, the merrier!

I believe Serviceberries (aka Saskatoons in the list HelenS posted) are native. They are a type of pome.

Jon – thanks for the reminder about pawpaws on the tag o rama thread. I’m going to try & get some from your CMU planting and/or take up your offer of finding them in your front yard. I have been wanting to try one! 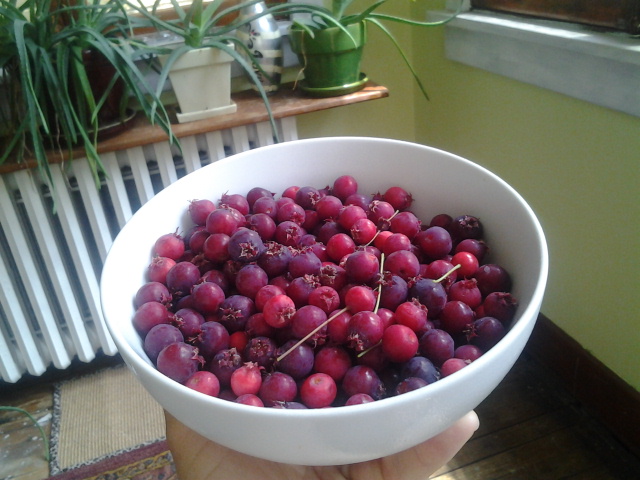 Thanks for the photo. Now I know what those berries are littering the street on my commute home along Brinton Road. I’m going to try a few.

Those are probably something else. Serviceberries ( aka Juneberries) come early and Robins will ravish what the people don’t pick! Next year try them in a

I procured a few quarts of serviceberries near the convention center during the arts festival. I learned about them from this board. They never made it into a pie, just ate them plain.

Can’t wait to try a paw-paw

BTW mine turned out to be haws, the fruit of the hawthorn. Which are edible but it sounds like serviceberries are better.

pawpaws are native to this region. There are patches growing in riverview park, and in penn hills, and a few in squirrel hill.

I went to the festival last year and collected a lot of seeds with my coworkers, and we are growing pawpaws in our nursery. I grew a few in my front yard as well!

I cant go to the festival this year, but I enthusiastically recommend it! You will eat lots of pawpaws on their own, and in other foods, and last year i rode a bike powered ice cream maker so that i could eat pawpaw ice cream. and there are 5 kinds of pawpaw beer!

it was fun. and cheap! i didnt get to do the ride though.

@jonawebb A guy from Phipps told me they aren’t native to this part of the country. They were wiped out in the last Ice Age.

there are a lot of things (most flora and fauna?) that weren’t around here when polar glaciers were as far south as Erie. I’m thinking most of them are considered “native” all the same.

Yeah, when I looked at the map after caitlin’s post, I saw they are native after all. Pittsburgh sits in a little spur. So I guess the guy from Phipps was wrong.

I was under the impression that “Moraine” state park was pretty much the southernmost extent of the big time glaciation, as per the “moraines” where the glaciers ultimately dropped their loads.

I’ve gone to this festival the last 2 years – it’s a great time, AND the bike ride is BEAUTIFUL. AMAZING. SO MUCH FUN. It’s a lot of rolling hills through lush farmland, picturesque barns & silos, marshy lowlands, wildflowers, etc. The last 2 years we’ve had perfect blue skies & fluffy clouds. Highly recommended, even if you can’t go to the pawpaw fest. I actually may have a map of the route somewhere in case you ever just want to go for a nice ride…If i find it I’ll post it.

Edmonds– There are several sets of moraines–it can be where the glacier paused and dumped off some its detritus before continuing. There are two moraines that cross southeast Michigan passing near Ann Arbor, the Defiance and the Fort Wayne (named for Defiance OH and Ft Wayne IN respectively, which also gives some indication of their length and orientation).

My pawpaws are ripe now. So if anyone wants some, feel free to come by and pick up the fallen fruit.

When this thread first came to life four years ago, I didn’t give a thought to Athens OH. But now that my daughter goes to school at Ohio U, I am in Athens a lot! Any updates on this year’s O.P.P.F.B.R.?

I read an internet “Top 10 list!” (I need to get out more) for bike trails that listed a trail from Athens along the Little Hocking River as one of the best.

Make your own Paw Paw fest (in a few years) with your very own trees.
I put some seeds in their own drawer in the CLP Main Seed library (on the first floor) today. I will replenish them in a few weeks when I get more seeds.

I had very good success sprouting them by keeping in the fridge in a plastic bag with a moist paper towel for a few months. Good luck!

To search for Pawpaw trees in the city of Pittsburgh, go to http://pittsburgh.mytreekeeper.com/ and click on Find in lower left, type in “pawpaw”, then look for orange dots on map.

It’s a database of 40,000 trees in the city of Pittsburgh, recording species, geolocation, and diameter.

Interesting. They’ve got the tree I planted behind the Westinghouse memorial but not the more famous ones nearer Panther Hollow lake. Also missing the ones on Mission St.

I find it hard to believe there are only two persimmons in the city- at the Highland Park entrance. Anyone know of more?

Map doesn’t work for me. I really want to try a Pawpaw this coming year. Just once. Seems to be pretty elusive. Are there any in the Highland Park area?

Gg I’ll have them in I think mid-Sept. I’ll let you know.

Thanks jon. Here is a little blog on them in Pittsburgh.

I’d forgotten about this thread. Now that my daughter lives in Athens OH a good part of the year, about 10 miles from Albany, I should look into checking out this festival.

If you want to buy frozen pawpaw puree or a 3 pound box of fresh pawpaws, try earthy.com and search for pawpaw

Both show as “out of stock” currently, but I’d guess they’re available in September, after pawpaws ripen.

13 minute radio program about pawpaws, a conversation with Andy Moore

That’s great. Do you know if they are bearing fruit this year?  I ask because there are several trees in Schenley Park but they haven’t produced fruit in the two to three years that I’ve checked on them.

Also: a fellow who lives by me has a greenhouse on his property and has been growing seedlings for Tree Pgh or some such organization.  He would be willing to try growing paw-paw seedlings for us if we get him some seeds.  So if you find/eat any fruit this year please save the seeds and I will pass them on.

When the Carnegie Library had their seed bank last year (or before?) I put a bunch in there.  I had about 20 in the fridge all winter- they have been very slow to sprout and are only now poking out of the soil I planted them in.

When they start to get ripe, I will collect more.