Thanks Paul, always nice to make the system more discoverable!

The little backwards Z down and back formed by prospect, the trail, and Pocusset Street is going to be a wonderfully convenient place for low stress riding.

I hope a lot of cyclists take advantage and I hope that cyclist traffic makes some of the shadier activities that reportedly take place there less attractive; that it becomes a family friendly kind of place.

The icing on the cake would be if Prospect drive itself became bike/ped only at some point.

Eight of us rode the new Pocusset trail on Sunday in the fresh snow. Aside from needing to watch for branches and cut trees sticking out, it is quite passable.

I’d be happy to be a part of any additional cleanup efforts here.

This made treehugger today!

Ok. There is now a work order with the parks department to have the tree blocking the path cleared, which was the last thing keeping the path from being traversable without dismounting. Some work has already been done, some of the branches off the fallen tree were trimmed off, and it’s relatively easy to sneak your bike around the right hand side of the fallen tree and get down the trail.

The path is mostly cleared, and completely passable. Just keep an eye out for pieces of cut down trees and overgrowth. It gets a bit dark and shadowy on the trail, so stay alert.

Might want to stay away from here during the day while crews are working (cutting down and replanting trees on the other side of the street), but nobody seems to be around after 5pm or so during the week.

I’ll keep an eye out for when this is totally clear and drop a line here.

I’ll be getting my kids out there the first clear day after the tree is gone.

Not sure of the work order number. See the 311 thread for more details (got the request number in there, but I don’t think that’s dpw’s work order). I work near here, so I’m scoping this out every couple days, so I’ll let you know when I see progress.

Bumping this thread so the more recent but originally slightly off topic one: http://bikepgh.org/mb/topic/so-now-the-left-from-hobart-onto-beacon-is-apparently-impossible/page/2/ doesn’t get the traffic by default. Of course the context now is Benzo’s response:

“311 Response Web Form Reply Notification
The following reply has been made to Ticket ID #98063:
Thank you for contacting 311. Request ID# 390922 has been assigned to your concern. The Dept. of Public Works now has a work order to removed the tree at Pocussett Drive @ Pocussett Drive Trail.
311 Response Team”

“Summary of action taken:
THIS TRAIL HAS BEEN CLOSED PER THE POLICE. THE TREE TRUNK WILL NOT BE REMOVED BECAUSE NO ONE SHOULD BE ON THIS TRAIL. — J. KOCH”

And some emails and suggested contact points. The seeming internal tug of war in the city suggests the possibility of doing some convincing.

But I think it has to be on more humble terms. I’d like to try and “reboot” the discussion that way. So, what would be great about this IF it stays open and how to convince people of that, because I think, given the history on Prospect and when it filtered down to lower Pocusset, this is very much not a given.

Basically, I think the neighbors and city have to be convinced this (keeping pocusset trail drive open and making it official for bike/ped (and I’d argue do-motorizing Prospect as well)) is the best shot for making a favorable not sex or drug or crime attracting locale that’s an asset, not a liability to the neighbors and beyond.

Agree @byogman — also that Lynette Lederman can be made part of the solution, not the problem. She seemed persuadable the day Paul and I first met her, after we did the chain-sawing. And somebody in the city did put the bollards up in place of the guardrails that used to be there.

I will note, especially in light of (DPW supervisor) J.Koch’s comment and the ensuing conversation between Jon Webb, Paul Heckbert, and Corey O’Connor’s office, that I rode the Pocusset Street Trail (the lower street, between S.Hill and the Greenfield Bridge) last night, and I specifically noticed that there was no notice that the ‘Pocussett Drive Trail’ (the old road up the hill) was closed; in fact, it bears the same line of plastic flexible bollards that the newer trail has, and is pretty much indistinguishable in condition, at least from the intersection.

A first entry for discussion, sharing with the powers that be and to bring to concerned neighbors:

The article is about traffic calming and crime reductions with several examples. The Dayton one is especially great because it involves closing streets to through-traffic.

Coming up from the bottom, Pocussett looks like it’s a trail.
If it were not then the guard rail that used to be there would have been repaired instead of being replaced by bollards. I get the impression that it’s a right-hand/left-hand thing in the municipal system.
The P.W.S.A. map doesn’t show any sewer lines.
I don’t think I’ ever remember seeing a manhole on that road.
I guess the point is to give us reasons to worry about riding there… Halloween.

I think the city actually came in and cleaned the Pocussett St. trail today. I grumbled about the mess of leaves in the morning figuring it would keep getting worse and eventually get slidey or slippery when wet, but on the way back through this evening the leaves and sticks were pretty much all gone. Not something I saw coming.

Way to go, city! Maybe they’ll even clear the snow from it this year?

I’ve been along Pocusset Drive Trail twice in the past couple weeks, between Pocusset Street and Prospect Drive. Each visit was on a weekday and short: about three minutes. On my first visit I saw five people walking the trail (one group appeared to be a mom, dad, and their kid about ten years old). The trail gets quite a bit of use! That time I searched and didn’t find any open manholes.

The second time I biked through I saw a mom pushing a stroller (with baby) along the trail. I’m sure for them it helps to have the fallen trees cleared, to make it easy to walk the trail without lifting the stroller. I searched again and this time I finally found a small open storm drain at the edge of the road. It was a safety hazard (small person could fall into it and hurt a leg, perhaps). This is probably what Corey O’Connor was referring to when told me there was a missing manhole cover. We took care of that with a large log. Problem solved. 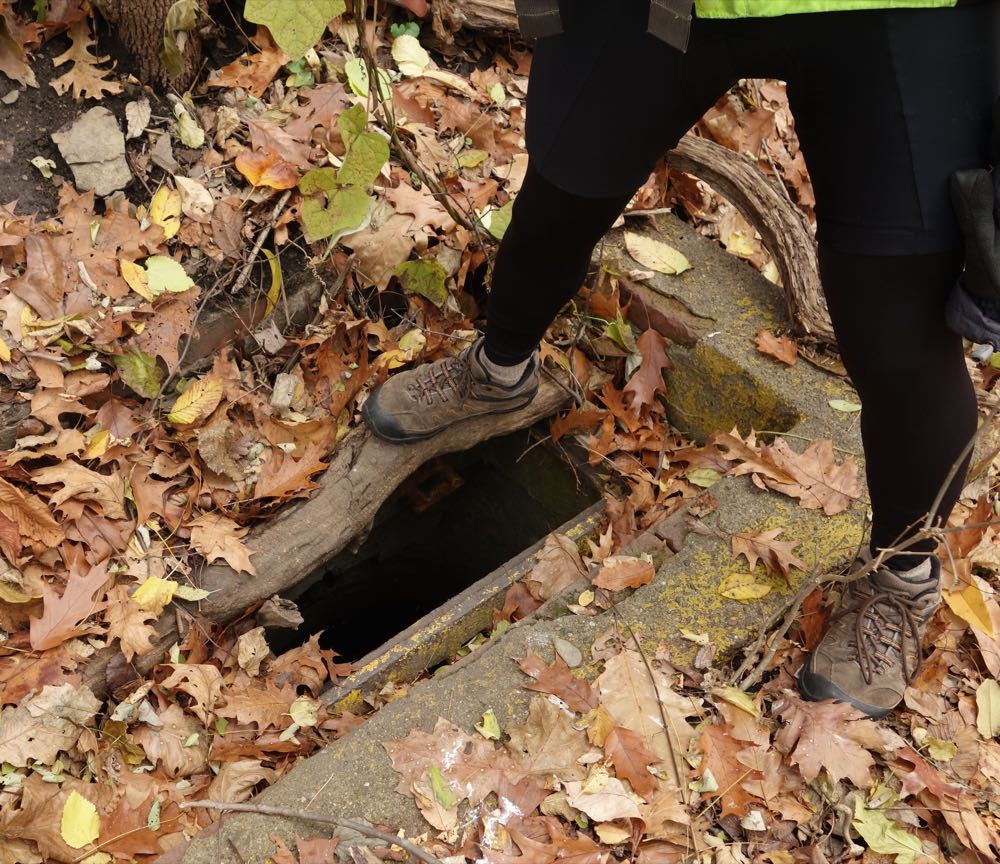 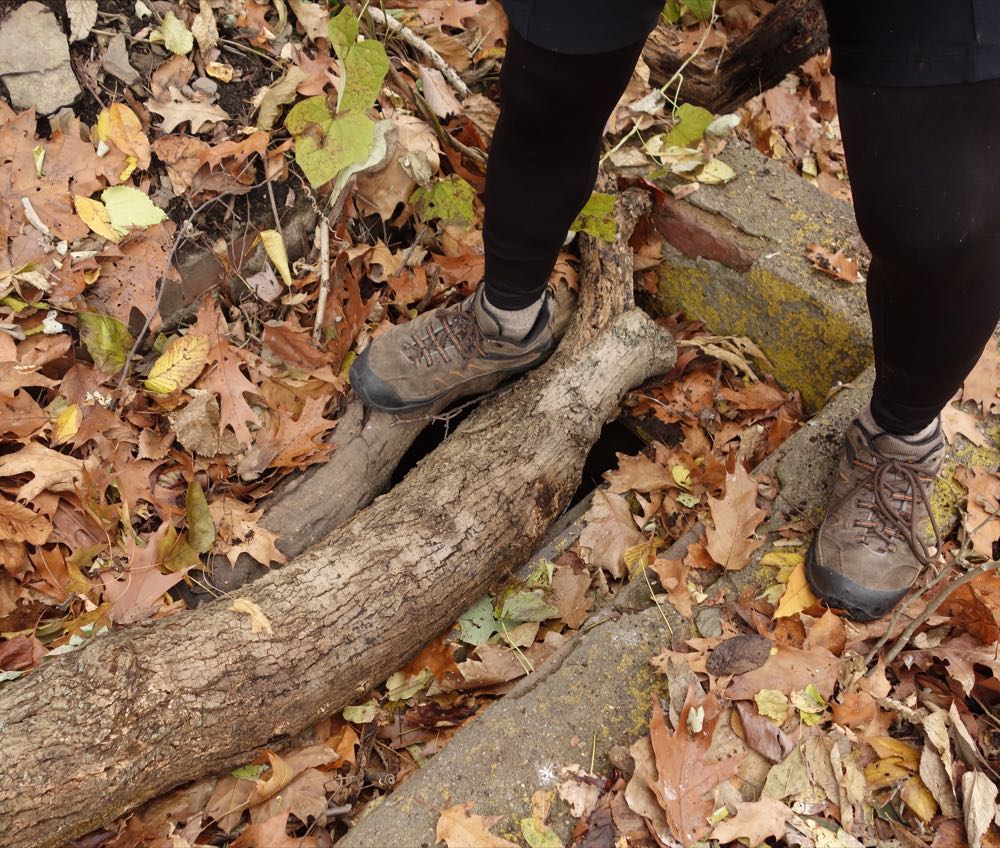 Thanks for doing that, and for keeping an eye on the trail, Paul.
When I’ve been there I’ve seen people walking their dogs etc. It’s a convenient route for people living on Pocusset St.

I just rode this — it’s completely clear now. A city crew must have gone through and cleaned it up. All the trees and branches are gone, including the stuff Paul and I left behind. The leaves and trash have been swept off, too. And the asphalt looks in better condition than I would have expected.