So, I’m trying to help a friend replace a brake cable on her bike, but the original one has an end that is like the barrel end of a mountain bike cable, but way bigger. a regular mountain cable end just pulls straight through the lever. Kraynicks didn’t have one an Gerry had no idea what it was, I havent gone to any other shops to ask about it yet. Anyone know where i can find a cable like this? By the way, the bike is some Giant mountain bike with disc brakes.

I would try whatever bike stores sell Giant brand bicycles. Worst comes to worst, you can probably get brake levers for like $10/15 bucks.

Is this bike old/new?, and if new, find out if it had this cable when new.

Is the cable thicker also, or just the end?

It sounds like it might be a motorcycle or moped cable that somebody adapted, but those are almost always made for specific models, and would have barrels or something molded on to both ends.

i don’t have the bike in front of me right now, but its a 2006 or 2007 model, she got it brand new in 07. i don’t recall the cables being any thicker and they definitely only had one end, and they were completely original, this bike had never been serviced or messed with since she got it new. I think I might check out pro bikes in Squill today, I believe they sell Giant.

neither of these fit it? the hole must be huge! 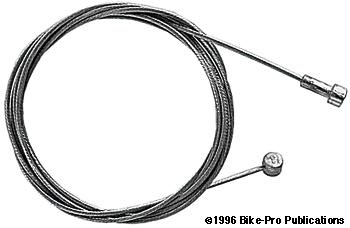 thats right, its like a really long version of the mountain end, and a little big larger diameter. i’ve never seen another one quite like it.

I did go back today and manage to get something rigged up that works with the normal mountain end. Its not quite how it should be, but it gets the job done. I didnt see a model number anywhere on the levers, but they are some kind of Shimano integrated shift/brake levers.

sounds like they are shimano integrated hydraulic brake levers.

Needing to replace a brake cable would seem to exclude the possibility of these being hydraulics.

I’m thinking somewhere along the line, someone screwed something up and this was the result. Other than in the early years of MTBs, the mountain bike brake cable has been the same for decades now.

What make and model bike is it? Something doesn’t add up here.

These are most definitely not hydraulic, and one of the most bizarre things I have ever seen.

The model eludes me at the moment, but it was a Giant mountain/hybrid-ish thing.

did you see the original cable? are you sure you aren’t missing a barrel adjuster or something?

yep. the original had the huge end on it, and the original rear cable is still on there and has the big funky end. I think I may have found the world’s rarest brake cable.

Huh…I wonder if one could judiciously hammer on a standard cable end to deform it enough so that it might more-or-less work. I don’t know how plastic those cable ends are.

I could try that, but a regular end is working just fine for her. There is no way its coming out, but it just doesnt fit the way the huge one is supposed to. When I said it pulls straight through in my original post, I was actually not even installing the cable the way it was supposed to be. That was dumb.

I don’t have the bike, so I dont have it ready for a photo, but I’ll try to get one tomorrow if I can. I’ll have to remember to take my camera to work with me.

I don’t think I would rely on a cable end that had been pounded on or deformed, it would weaken the bond to the cable, recommend against that. Maybe a little washer or ferrule or something.