The movie: The Next Three Days, filmed and set in Pittsburgh

Russell Crowe gets the shit kicked out of him, and tells everyone he got into a bike accident. How appropriate

uh, what about Flashdance?

she rides a bike everywhere and even locks up to a bike rack in front of the Carnegie! there’s a classic scene where she gets offered a ride by the rich dude, and she says, “naw, i got a ride,” then takes off on her bike 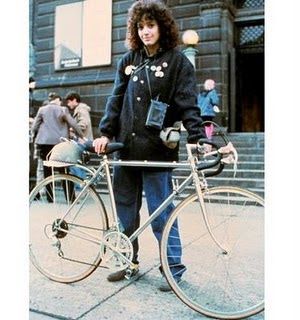 here she is, check out how dirty the building is

Actually, Russell Crowe is an avid cyclist, and he did alot of cycling around Pittsburgh and its surroundings while filming the movie… so kinda appropiate.

i found out yesterday that in the movie state of play, which actually used my house in DC for one of its scenes, russell crowe’s character was a pittsburgher as well… i wonder if he wants to move here

did he get the pittsburgh accent down? i’m always impressed at how well he hides his aussie accent

i was really disappointed not to hear any yinzer talk in that movie next three days. the only real accent i heard was brooklynese. but the cops sounded like typical hollywood toughguys. everybody said “dOWntOWn”

Even I don’t say downtown anymore.

Chances are pretty good that Pghese is so regional, comparatively few people not from here have ever heard it.

lawn guylandese, chicagoese, bostonese, etc. are all regional too but for one reason or another they’re well-known. consider baltimore: people know that baltimorons talk funny. why? i’m guessing movies – john waters. so if pittsburghers in movies talk like anybody else, how can the yinzer thing propogate nationally?

Stu’ss right though. Yinzer as a colloquialism or dialect or whatever is spoken in a pretty tight circle around Pittsburgh. I remember looking through the back sections of the enormous dictionary we had in the house growing up. There was a map identifying regional speech patterns – and they were mostly REGIONal – except for the tiny circle around Pittsburgh.

(going with the OT tangent) It’s not just Pittsburgh, try the mining towns all around Pittsburgh in Southwestern PA. I hear some pretty thick accents out a ways from the city limits…out where I grew up. Admittedly, it is a higher concentration in the Burgh.

The thing is, as endearing as the accent is to me, I’m glad I never picked it up myself… Not sure I want it to be propagated nationally…no offense!

Although my friends and I think there should be a Yinzer voice option for GPS navigation software: “Yinz are goin’ the wrong way! Turn arahnd!”

comparatively few people not from here have ever heard it

Perhaps, but there are an awful lot of people who aren’t here who are from here, if you follow me.

something I discovered while traveling a ridiculous amount abroad – when surrounded by a population of people who, statistically should not speak english, it is still inappropriate to assume that two can hold an english conversation and essentially be speaking in private. Just mention one or two words of a culturally taboo topic, and quickly look around – at least one person will sneer or give the evil eye, it never fails.

For true privacy, one needs to adopt an outrageously strong regional accent. I liked to mix it up between Valley Girl, Southern Bell, and Yinzer. It often prompted the bolder natives to ask politely what language I’m speaking, to which I reply Angelean, Tennesean, or Pittsburghese, as apporpriate – saying English would be lying by their understanding of English.

wait, how did we get here from Russel Crowe’s Big Adventure?

My husband grew up in Oakland, born to parents who are not from here. They worked very hard to pound any trace of Pittsburghese out of their children’s speech.

Some years ago, while living in Seattle, he and I took a weekend trip to Bellingham, Washington. The guy who ran the bed and breakfast prided himself on being able to identify regional accents.

After talking to my husband, he looked a little confused and asked, “Were your raised in a foreign country?”

I bought a Warren Zevon album in a shopping mall in Salt Lake City, and the clerk nailed my birthplace within about 150 miles. “Say something else! Say something else!” she kept insisting between the peals of hysterical laughter. I was rather perplexed, as I had always thought I have just about the most generic Northeastern accent there is, with a slight trace of the Canadian Scots/Irish O at times. And Salt Lake City is not exactly a distinctive accent either. I guess she just had a sensitive ear.

I was raised in very far upstate new york, in a region that as a very distinct but very regional accent. Largely influenced by a French Canadian and an influx of Scots, Irish and Welsh immigrants that started in the 1800’s and ended sometime in the ’50s. (Even 50 miles away, it is noticeably different.)

The rest of my family was primarily raised out side NYC, in West Chester County.

When I got to college I tried really hard to remove my accent and somewhat succeed. There are still some words, where I screw up. But unless I’m around family, excited or tired, my accent is fairly neutral.

Once on the 61B, a woman asked me what my native language was, to which I replied kind of flabbergasted that it was English. Turns out she was an ESL teacher and was going to tell me about her class!

The other time I was cycling in Wales with my sister who has a noticeable NYC suburbia accent. We were in a small town cafe, and people started questioning our different accents. We explained that she grew up outside NYC, and they interrupted her “So why did your family move to Wales?”

Confused we asked what they meant… an 80+ year old gentleman in the corner (with a thich Welsh accent) pointed at me and say “He talks normal, don’t he?”

When we explained, they were embarassed and fascinated that they’d missed the mark by so much.

He’s not kidding. I used to think that it was just my aunt from Heuvelton who talked funny, but it turns out it’s everybody from Ogdensburg over the age of 40. And yet my grandfather, from DeKalb Junction, somehow spoke as plainly as anyone from, for example, Binghamton.

myddrin, I was once complimented on how well I speak English by a German woman in France. “Almost like an Englishman!” I didn’t ask her which part of England she meant.

before coming to Pittsburgh I knew nothing of its strange accent. Growing up on the other side of the state, saying “yous guys” was common (if not exactly classy). Anyway, one day my French teacher told us that where she’s from they say “yinz”. I remember going home and telling my Mom who asked me, “well where is she from??” I had no idea it was in Pittsburgh, a 4 hour drive away.