Does anyone know anything about the pike2bike trail near breezewood. I seen a few websites but they look out of date. The group of people I ride with was talking about new rides and we were thinking about this one but I was wondering if anyone has ridden it recently or could tell me about it.

Are you sure that’s the name of the trail??? I have a cousin who lives in Breezewood and said he never heard of Pike 2 Trail??He’s also an avid Trail biker. How long is this trail?

pretty sure, here is one of the websites

like I said I have only heard about it and dont know anything more. some friends and I have talked about it but we dont want to travel all that way then find out we can’t ride it.

looking for any info people have

I’ve been meaning to go and check it out too. As far as I know it’s still open, but I haven’t ever been.

Well Tabby if I can find out anything and plan a ride I will be sure to let people know when. all my rides are come one come all kind of things.

I would be interested in riding this trail some time. It seems like a long way to go for a 9 mile trail though…

I agree, im thinking if I can find the info of making it a saturday ride and get there friday and spend the night hanging with the other people riding. I did find a tour agency offering tours of pike to bike so i emailed them and asked for info about it

This sounds awesome – I have to see if I can convince my Saturday cycling group to do this thing.

Just got an email from the guy that runs the tours, it trail is still there but is a ride at your own risk.

two tunnels, one over a mile long, (bring a light) will be planning a trip with my friends and will be sure to let everyone here know about it.

Check my LocalHikes review with maps:

finally went and checked this out. sorry, it wasn’t a group ride but I would be up for doing it again with a group now that I know what to expect.

we stayed overnight at the Wiltshire Motel in Breezewood and it was cheap and clean. the ride was leisurely and really driving out and back in one day would be doable, but we were taking our time.

I took some pictures, they are here: <table style=”width:194px;”><tr><td align=”center” style=”height:194px;background:url(http://picasaweb.google.com/s/c/transparent_album_background.gif) no-repeat left”> 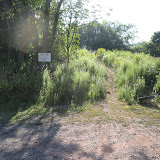 those pics look great, did you take the tour or just go on your own?

thanks, glad you liked them. no tour- we just explored on our own.

That looks terrific. I’ve got to go there before they clean it all up.

How far is all this from the GAP/C&O? Some irrational part of my brain won’t shut up about not wanting to drive to a bike ride to drive home again. Typically overwhelming data supporting common sense is enough to quell the protest.

I’m similar, but I refuse to label that part of my brain irrational. “If you drive more miles than you rode, you did a bit of biking on your car trip.”

I’m curious: was this Pike 2 Bike, or at least part of it, on the Crush teh Commonwealth trip?

yeah, can’t blame you for not wanting to drive on a bike trip. However, the GAP is routed significantly to the west of the P2B trail- like 60 miles west.

Oh – Mick, Tabby, it’s not just not wanting to drive on a bike trip. I don’t want to drive at all. Since attempting to give up the car (mixed success), I just don’t want to be in cars. I’ve been informed I have an irritating new habit of announcing “cars are poopy” whenever I’m forced to ride with the Fiance driving.

60 miles… hmm. Not sure if that’s worth it, but it still looks wicked cool.

Is tht Pike2Bike part of PS bike Route S? In any case, It would be close to Rt S.

Rt S co-joins the Gap in West Newton and leaves the GAP at Rockville to go towards Summerset.

Pike2Bike is not an official part of Route S, but does nicely bypass a big frickin’ hill. In Breezewood, Route S goes right past the start of Pike2Bike; on the east end of Pike2Bike, you just hang a left and go a mile or so, then you’ve rejoined Route S.

And yes, it is part of Crush the Commonwealth. That said, the stretch of Route S between Pike2Bike at Breezewood and the GAP at Rockwood is some of the most challenging; not to dissuade anyone from taking that route, but be aware it’s a tough stretch of road.

“Cars are Poopy” should be one of the next set of Bike-PGH bumper stickers.

I agree with Kordite That should be a sticker

@reddan That said, the stretch of Route S between Pike2Bike at Breezewood and the GAP at Rockwood is some of the most challenging; not to dissuade anyone from taking that route, but be aware it’s a tough stretch of road.

Dan, I’m particularly interested in the Rockwood to Somerset part of this “most challenging” stretch.

I’ve had the impression that it wasn’t bad. “Water Level Rd” has such a nice sound to it. I know that Somerset to Breezewood is hilly, with traffic and narrow, fast roads, but I was hooping Rockwood to a friend’s cabin at Somerset would not be bad.

I wonder if saltm513 might be interested in bringing her hoops to an abandoned Turnpike tunnel. I doubt it’s been done before.

(Sorry, Mick, I usually don’t jump on people’s typos, but that one was too real an idea to pass up.)

@mick: Water Level Rd, the stretch betwixt Rockwood and Somerset, is just fine…a nice gentle uphill grade. It’s the bit from Somerset to Breezewood that is pretty tough. Never noted any traffic problems, but there’s some hills in them thar hills.