So I’m thinking about once again putting on the Pittsburgh Roubaix. By popular demand, it will probably be harder–more climbs & more cobbles–and maybe slightly longer. I’m also thinking of adding a fun-ride category that cuts out the worst of it, costs less to enter and isn’t eligible for the best prizes. If everything goes as planned I’ll have water & PB&J in the middle somewhere so it’s almost like a supported ride. Maybe I can charge $20 like Pedal Pittsburgh?

I’m looking for other ideas for the ride and route suggestions. Last year’s ride covered:

* Laketon Rd. (kind of a climb, or at least everyone looked tired by then)

Some contenders for this year:

* Wyoming St.: cobbled “V” at the top of Sycamore

* One of those cobbled/brick loops off of Center (Uptown/N. Oakland)

* Buena Vista in the North Side.

* The real crappy part of the strip trail

* Cobbled road down to the Greenfield ball field

* Suffolk (I forget who suggested this, but it’s a Dirty Dozen hill…)

Anyone got any others? I’d especially like ones in places people don’t normally ride, so now’s the time for you to all shout out your favorite north hills dirt road (Brian J & Steevo, I’m looking at you…) I considered that brick climb in West Duquesne, but I don’t know if I feel like riding out there to scout it.

Oh, and anyone got a preference on when? Earliest would be in July, but it might end up being early August since it looks like I’ll be out of town half of July. Roadie type people: this is especially directed at you since I’d like to avoid conflicting with one of your “races”. I put “races” in quotes because clearly this will be harder & more fun and will have cupcakes.

Being somewhat lax in the church going department, I tend to shoot for Sunday @ noon registration/1pm start, but I’m flexible in case anyone wants to ride at 5am instead.

How about Harbor Street in Spring Hill? Its a good hard climb up Itin from Chestnut to get there, then you can wrap up Romanhoff, left on South Side Ave, right on Sunset, then down Lamar to Spring Garden Avenue.

Do it mid august during BikeFest!

It’s really pretty simple to join Campbell’s Run (off Guy’s Run) to Old Mill to McClelland. All are really awesome, riding-through-the-woods dirt roads that are (mostly) ride-able on a road bike. Campbell’s Run is actually closed at both ends (so just ride through the big concrete blocks at the bottom), and almost completely devoid of any development for most of its length.

There’s lots of brick in Braddock, too.

Glad you are thinking more hills and more rough stuff. Last year was fun, but overall I wanted mre suffering.

I used to do the cobbles at the top of Sycamore on my daily commute. Put this on the list! I remember the first few weeks of getting to work this way, I’d be all blown up from Sycamore and then have to hit the cobbles.

I wouldn’t consider the brick streets very rough, some of them had a much smoother ride than a lot of the asphalt streets in town.

There are some killer dirt path climbs in Riverview Park, very doable on a road bike. Great paved climbs too. Fun going down also. I’d be up for scouting out some routes through the park.

Talk to me about some prizes too.

murray hill is one of my favorite streets to bike up. and it’s even more fun to bike down!

Not cobbled, but, if you’re heading Riverview-wards, swing up Schimmer off Brighton Rd to Shadeland Ave. Nice little hill, will warm up your legs…then come back down, cross Brighton at the traffic light and work your way back to Kilbuck and the busted-pavement trail up to the top of Riverview.

If there’s a “just along for the ride” class to this shindig, I may have to come out and share the pain. From way, way in the back, mind you…

Just speaking up in favor of the kinder, gentler ride option. I like that idea.

I’m questioning how much harder I can take this ride, but do it.

I don’t care about it being any more miles, but more cobbles is more better. I want to come back covered in filth.

If you want a crazy cobble hill add kendall st.

I approach Pittsburgh hills in a touristy way, with a proper sub-one gear ratio. Kendall looks awesome with the Celadine addition. I gotta go there.

Fannell St (probably too short and out of the way)

Well holy smokes, thanks for the responses. I’ll check out those various cobbled sections and see how they look.

Sounds like the “kindler, gentler cobbles” is a go. Or at least a recumbant category for reddan.

There should be enough here for a pretty heinous “Hell of the South Hills / North Hills” ride. If I get my poo together I’ll try to put together some scouting expiditions if anyone wants to ride along.

@eric: thanks for the prize tip, I’ll be in touch.

i’m so excited to hear… “we thought we were doing ok until we saw you ahead of us” about five more times this year!

Hey Steevo, what’s the cobbled street that takes you to the Hobbit houses in Highland Park? I think that’s the hardest section of level cobbles I’ve ridden.

Or at least a recumbant category for reddan.

What’s that? Ooh, ooh! I can place first in my division! Oh, happy day!

No need…I’ll just do the full route, with absolutely no intention of anything other than enjoying the ride, waving at the pretty girls, and finishing DFL.

oh man, mayhew, totally! i forget the name of that street but yes!

I don’t suppose staircases count, or I’d suggest Howard St to Rising Main Way. I carried my Raleigh up it once, just to say I did. 145 steps, IIRC.

Also in that same neighborhood, try Compromise to Sprain to the end, and a semi-pedallable path up to Warren Street. You will get dirty. No guarantees on personal safety, either.

Might be some belgian block streets up there by the former WPXI studio and tower, but I can’t recall specifics.

i was in the neighborhood, so i tried to go up kendall st. today. unfortunately, i’d never been in that area before and didn’t really look at the map (i also forgot the street name–i wasn’t actually planning anything), and ended up seeing cobbles and going up leyton st. do not–i repeat, do NOT– try this. a) it’s a dead end, and 2) when your front wheel slips out coming down and you can’t unclip in time on its approximately 15 percent slope–which happens to be covered with gravel–you’ll wish you’d listened to me.

edit: actually, looking at google maps now, it seems as though the cobbled section is duncan st., and google says it goes through to kendall, so i was definitely in the right place. it doesn’t, however, go through to kendall. and it was at that intersection where i did my horizontal track stand.

Looks like it’s just a place where the step-street portion on Duncan isn’t clearly marked.

Is this the hobbit house you are talking about? It must be. (cordova rd.)

Bingo. One of the roads that leads to that house (at least the way we went) was seriously cobbled.

Phillips Ave in Sq. Hill has some cobbled sections. There’s a stretch leading to Wightman if you take the right after crossing the Greenfield Bridge. There’s also another two blocks of power-climb cobbles right after you cross Murray heading east towards Frick.

Isabella St on NShore. Dead level but close enough to everything else that you just have to work it in if you’re going anywhere near it.

Definitely Not Level: There’s a belgian block alley running off of Balph in Bellevue, closed to auto traffic. Insanely steep. There’s a guardrail across the top to prevent auto traffic. I’ll scout it out as to whether you can get through on a bicycle.

Capitol Ave off of W. Liberty is a bitch. Nasty cobbles with wide spaces between. Tough for a road bike to make it. Feels like your car is going to fall apart when you drive on it!

Maryland St, Bellevue is the alley I mentioned. Brick. Brief but very steep. Almost impossible to get to level part of the street from the top of the hill; guardrail and parked (junk?) cars block the top, plus a curb jump. I came down it. well, if we’re looking for insanely steep, why don’t we just throw canton ave. into the mix?

there can be only one…

chesterfield in oakland would be a worthy addition

Whew! Now that the balmy heaven is done, it’s time to get this finalized. First, the flyer: 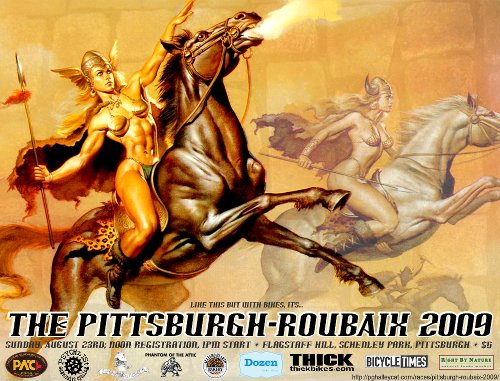 The route is not finalized, in fact I’m looking for input!

2. Schenley fireroad to Panther Hollow lake (so that running the steps to go down Joncaire is harder)

4. Climax St. (cobbled spike off of Arlington in SSide slopes/Arlington)

9. S Side Ave. (in that neighborhood behind Spring Hill, basically right across 279 from Bergess)

I’m tempted to add Cordova St. (cobbled road to hobbit house) after Laketon since it’s ridiculous (forces you to cross past washington boulevard) and also makes running down the trail to the oval a viable strategy.

I cut the sandcastle parking lot railroad stones since that basically just forced people onto 837 and added some distance. I was thinking of cutting Laketon for the same reason, but I like the fact that that’s a climb that only really hits you at the end.

I’m tempted to add Capital Ave (off of West Liberty) since those cobbles are absolutely insane (thanks, Mayhew). I don’t ride in the south hills enough to know where to add them… after Wyoming?

I also wanted to add Bryn Mawr (brick/cobbled loop off of Centre in Oakland), Soho (uptown) & maybe Chesterfield (Oakland). If so that will probably be right after Joncaire and before the Mt. Washington leg.

And VOLUNTEERS NEEED! Volunteers get a sense of satisfaction and a high-five. PM or email me at dave@pghalleycat.com

Is there going to be a map of sorts for this one?

@Brad: Yup, going to put together a Google Maps

I really don’t want to do this.

Yeah, go up Wyoming, down Southern. Quick right on Arlington, left on 51 to W. Liberty, then up Capitol. Left on Pioneer and you’re right back on W. Liberty. Up Southern again to go back over Mt. Washington or you can take Bausman up and over.

Hmm. I may admit defeat and sit this year’s race out.

I’m still vaguely hoping to come out and embarrass myself.

Anyone wanna help form a “Back of the Pack with Booze and Bravado” brigade?

I was thinking of making Capital optional as a time bonus. Any idea how long would be appropriate?

@Brad: too much? I haven’t calculated the distance yet and am still going to drop some sections… any recommendations? For the flow of the race dropping Capital or Henriet, LaClare & Laketon seems to make the most sense. Capital is just so far out there, but man is it an absolutely ridiculous set of cobbles.