I took a pic on the way home tonight. I think it looks really cool all lit up.

Nate, I jut looked at the blue lines and I know the eastern edge is too far east of the map limits. The map shows Sandy creek (RT130) and ARB intersecting pretty clearly. I am pretty sure the ARB pylon was only a few hundred yards off of the map (if you look at the bit that shows behind the legend).

Is anyone planning on getting this today?

I was hoping someone would get it today, since I’m planning on riding out tomorrow morning, and in the opposite direction. But if no one has gone to buy pitas today, I might have to change my plans for tomorrow.

EDIT: my husband doesn’t feel that it is smart to go through the neighborhoods i would have to go through as it gets dark/is dark, so perhaps tomorrow morning.

Yeah. After living in a few of the neighborhoods she would be slowly climbing through near or after dark I didn’t like the idea. I like having a live, non-mugged wife.

Now I have to figure out if I want to go back Into town the way i came.

i don’t think this has been used yet. i just love this. the White balance may be off and i didn’t know how else to Line my bike up with this headstone other than laying it down on the ground.

Well, I know where this is, but I don’t know *where* this is, if you get my drift.

i left hidden directions in the clue 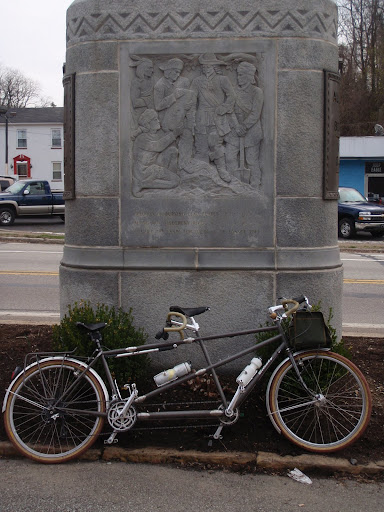 STOCK PHOTO!! not a tag pickup

In summer, the vegetation growing out of that roof adds a nice touch. Probably would be spooky if not for the bright sunlight. 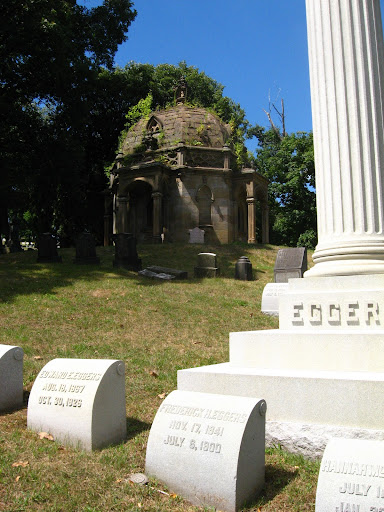 AH I RODE PAST THAT 20 MIN AGO

Stef, it’s a little late but good job picking up the Brookline tag. I’m not sure which route you took, but yeah, the South Hills suck for bike riding.

(when is this board going to be fixed

How I would’ve gotten to the Brookline tag, had I recognized it: Bus it to the South Busway’s Central stop, hauled the bike up the right staircase, about 150 steps, then biked Brookline Blvd. That would have taken you right to the place. Nice combination of bus, stair climbing and a pleasant ride there.

The bigger question is, how did you get home? I’d’ve been tempted to come down Pioneer, cross West Liberty onto Hargrove, hop up on the half-abandoned railroad tracks, and when you get to the end of the building across from the end of the Wabash Tunnel, cross 51 on their parking lot, and use the tunnel.

I have a friend that lives a few blocks away and he sometimes goes through the liberty tunnels into town. Not something I would do, especially without a blinky.

I got there the same way I went home: 18th street to Brownsville road, nobles lane, cross 51 to whatever the road is named before it turns into whited, then it dropped me onto Brookline. The ride home was a bit hilly but nothing compared to the ride there. It was an interesting ride. I thought about bussing part of it but I need to get miles and hills in before pedal Pittsburgh.

West Liberty is the better option, when compared to Pioneer. Pioneer is full of potholes, is a rough road where there aren’t holes and does not allow for enough room for cars to pass safely.

I may grab this tag on my way into Tahn this morning.

By the time I came through last night, the cemetery was closed 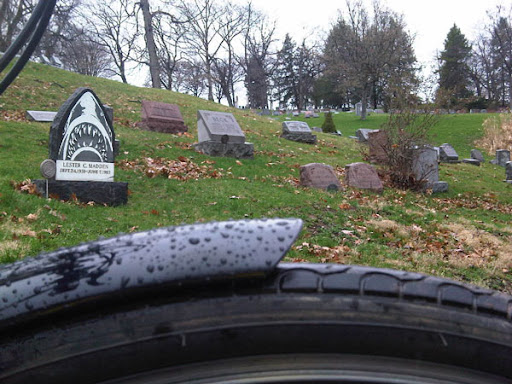 That was a fun tag. I don’t go through that cemetery very often: it’s a very strange and wonderful place.

(Sort of a triple Bruce – “Bruce” was the nick-name of the mechanical shark used filming Jaws. I watch too much TV.)

i love this grave. i love many cemetery graves, that if i had a tag i would be tempted to always go there!

Also, Bruce was the shark in Finding Nemo (although that was a tribute to the Jaws Bruce, so I don’t know if that counts)

RF – That makes it a Bruce to the Fourth Power!

I’ve been in my mind,

it’s such a fine line

That keeps me searching

for a cup of gold

People come staggering out of there, high on psychoactive stimulants, who knows what they’re gonna do.

I am 95% sure I know where this is and it is like 4 blocks from my house but I am in my pjs and there is a fire going and a 100lb dog is on my lap with a 62lb dog laying on him. Not leaving house

This post number is my birth year. In the next week we’ll go through all our birth years and on ..

Hey, Stef! Glad the dogs let you up to let you get to this tag! Fire and large lap dogs sounded good last night, after walking a mile from the bus in the cold rain.

bah! i had absolutely no idea where that was or i would have saved you the trouble of going out in the dark to get it.