off topic, but I know some of us plan our routes when riding according to tree lined streets–so here is a chance to make them more tree-lined!

TreeVitalize Pittsburgh is a partnership between Friends of the Pittsburgh Urban Forest, the City of Pittsburgh, Western PA Conservancy, the DCNR, and Allegheny County Parks to add 20,000 trees to the region by 2012. At the end of this fall we hope to have reached about 8000.

Register for a planting and help plant in a community near you, along a trail, and city-wide!

Plantings will be every weekend starting the 23rd til Thanksgiving.

are you planting any fruit trees?

this is really awesome! I’m hoping to do the southside flats one!

Our plantings focus on the public right of way–so along streets and trails. We don’t plant fruit trees in this area, even though EVERYONE ASKS, because of a few reasons: One, we want the largest tree that will fit in the space so we can get the most benefits of it over time: if there are not overhead wires for utilities we will plant something tall growing, like a Bald Cypress. If there are utility lines, we will plant something shorter, like a Lilac Tree, or a Hawthorn.

There are some fruit bearing trees we plant like Sevice Berry, but most people are thinking apples or pears when they say fruit trees. But, alas, planting those in the right-of-way leads to a giant fruit mess on the sidewalk and streets, and as much as people want them, just as many people will proclaim their hate of trees due to this mess.

And, when we plant we need to address things like: how will it be maintained in the future? Can it tolerate all the sidwalk salt (fruit trees, not so much)? Will it be okay with less water than trees might need? Etc. A lot of planning goes into it!

I hope that answers your question about fruit trees.

Yay! I love riding on tree-lined streets and I am one of the people who tries to plan my routes based on shade.

I love fruit trees too. Particularly avocado trees though I’m on the wrong region / continent for that.

Twice I’ve had “acorn” flats, but I still love trees!

I had an acorn hit me on the head (helmet) today on my ride in. Glad there aren’t any coconut trees in Schenley park.

I bet if there were you’d end up with some cartoon-style x’s on your eyes.

There are some fruit bearing trees we plant like Sevice Berry

Serviceberry in my back yard: 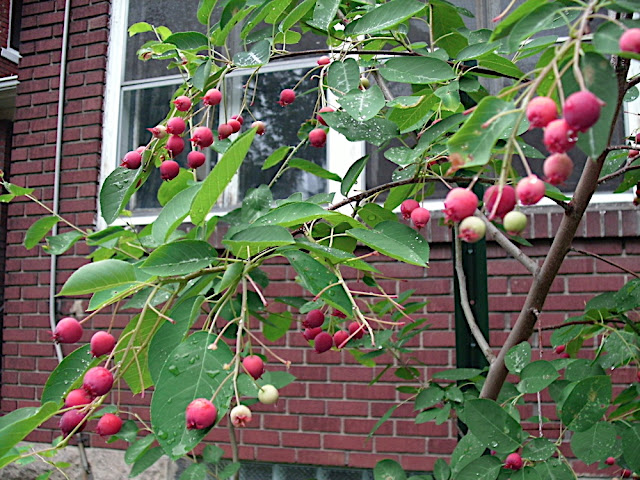 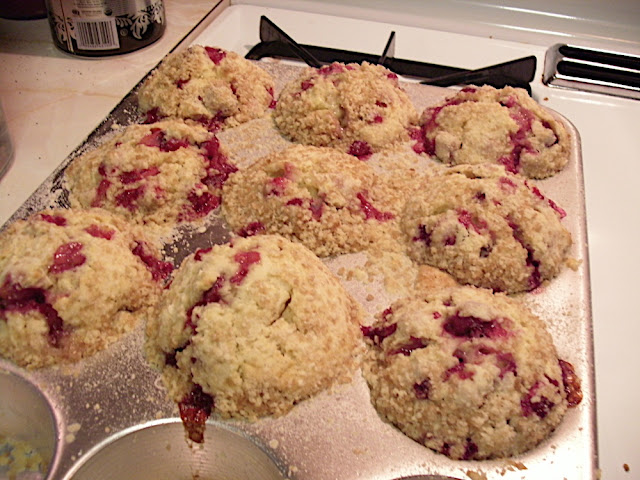 Changing a tire in my carport a few weeks ago, the adjacent 70-foot oak tree was dropping acorns on the roof so fast it sounded like artillery fire. It was actually difficult to walk on the steps for a couple weeks because of so many acorns.

All other things being equal, I’d rather get hit by a falling acorn than a horse chestnut. Ditto running them over when they cover a trail. SUNY Geneseo used to have a pair of chestnut trees along one sidewalk, and it took some agility, on both foot and unicycle, not to trip or lose control there.

In Davis, someone had the bright idea to line the bike trails with hundreds of olive trees. You think running over acorns sucks… They are extremely beautiful though:

I got plonked by a few small nuts in Mellon Park, but it seems that someone (perhaps the Schenley High crew) clears the path on occasion. The black walnuts on Forbes along the Homewood cemetery path are no fun to navigate, either!

acorns are food, stu! You were tripping over food! http://www.grandpappy.info/racorns.htm

I’m trying to get hazelnuts and spice bushes in my front yard, but I don’t have room for a nice lovely tree like those. Saturday I’m headed to the Schenley thing.

Too bad you were in a hurry the evening after the Dubois ride, ejwme. There were thousands of acorns in the yard.

stu – I was very sad. I considered collecting this year, but adventures in home improvement as keeping me hopping till Thanksgiving. acorn culinary explorations are on the list for next year, as well as black walnut adventures.

Mmm, that fungi expert of yours ever dabble in the edible?

i wouldnt call myself an expert but i have found a fair number of tasty edible fungi in my time.

and NICE serviceberry pics. I can tell you where many of them are if you want auxillary berries, but you know you have to fight the birds for them!

ps there are still some hazelnuts dropping from the filberts in the whole foods parking lot. i picked up about a dozen last week.

my dad doesn’t forage for food, but he has been known to forage for… *ahem* fungus the consumption of which is alternatively useful. (and he loved the pic of that fungus we saw, he was very impressed!)

he has a friend who knows all the best places in BC to find Morel mushrooms, so I didn’t realize until recently how expensive they are, because we ate them like candy. his friend won’t share that knowledge, but luckily likes to share the mushrooms, so that’s the next best thing.

Re: Acorns: After Caitlin’s group’s acorn collexion a few weeks ago (Flagstaff has like every kind of oak, jeez), we were chattin about eating acorns. Justin from Nine Mile Run Watershed Assoc said he had a book about foraging (Stalking the Wild Asparagus, I really want it now) that had a passage about it. Justin is awesome and scanned this for us:

@dwillen: Those olive trees are stunning!

@ anyone interested in serviceberries: seems like they can be subbed easily in baked goods calling for blueberries. To me they taste a bit like soft apple bits, slightly more tart. You do have to race the birds to get any. In June (they’re also called Juneberries / Shadblow / Saskatoon Berries / Amelanchier).

Oh, I am soooo going to save this thread for next season. With two 70+ foot oaks in the yard, I think I have enough acorns that I can share some with the squirrels.

there was an acorn cooking class somewhere recently… i will have to try to find it!

This year I have seen acorns, apples, pears, elderberries, blackberries, mulberries, wild cherries, hazelnuts, and walnuts all go to waste under foot and car tire.

Every spring, onion grass, mustard greens, kudzu, nettles, dandilions, sedam, and all manner of edible “weed” get put out to trash by my crazy neighbors while they try to “clean” their yard.

please don’t let food go to waste! If you can’t consume it, or it’s on public land, post it here: http://neighborhoodfruit.com/ it’s free and wonderful.

Food is awesome – you don’t even have to plant or cultivate it to get some, just watch and wait

I was on a long ride last Friday and stopped to eat some apples that had fallen in the street. Mmmm

I’m pretty sure there’s still a green apple tree on the right side of the slummy townhouses on Neville in front of Central Catholic.

In case anyone has the munchies after the Boundary St ascent…

Cyclists locked to trees in front of my building, which (combined with the hundreds of pounds of salt) killed those trees. They cut them down and installed two bike racks.

This weekend they planted new trees, but the people who did this have a fundamental misunderstanding of how a bike rack functions:

really? they put new trees in there? hm.

i mean thats cool but they will probably die again if they didnt replace the soil and they aren’t gonna stop salting.

So, who cares? The nursery gets paid to supply the trees, and the city employees get paid to plant em, and everybody likes trees, right? Grr. If you asked the crews what was going through their head, it would be something like this:

The work order said “drop off twenty trees, one at each planter on each side of the street”, so we did. Bike rack? Oh, yeah, well, I had twenty trees in the truck, and it’s 6:00PM, so what am I supposed to do, leave one in the truck just because it didn’t seem like a great idea to me? Who am I gonna call and ask? Hey, that’s not my problem, I just do what I’m told.

The work order said “plant trees in each planter on the street”, and we got there, and there was a tree lying on the ground by it, and so what are we gonna do, just leave it there? I dunno, it’s here now, and I’m here, so just plant the thing, and nobody ever got fired for doing their job. It’s not my job to ask questions…

There are clear spaces on the sidewalk where bike racks could go, but instead they just pushed them aside. Now you have light poles and trees preventing you from locking your bike in the rack. I predict people will start locking to trees again, since half the rack spaces aren’t usable anymore.

is that rack even bolted to anything? it looks like it’s just sitting there.

Not bolted. I think it used to be bolted to the tree grate, but they moved it to plant the trees. Now both racks are just sitting there.

It is a university sidewalk. 311 wouldn’t care.

Good news though, this morning both racks were moved, so they are again fully accessible, and at least one of them is bolted down.

no one in the city plants trees. the city has $0 as its planting budget. all trees come from alternative compliance through city planning codes or from a state funded program that has limited funds and will cease to plant trees after rendell is no longer governor. this is why we have so many plantings with volunteers–the trees get planted for “free” and they usually last longer.

while nurseries and contractors are getting paid for planting trees, that doesnt mean they don’t want them to live. most trees planted by contractors have a warranty on them–so if they die within a year or two the contractor and nursery are required to replace them at cost to them.

i should write a lengthy “how trees get planted in pgh” post on my site when i have the chance. its really complicated–just as complicated as bike racks and lanes!

thanks for your explanation on why no fruit trees.

i’d be interested in hearing where the service berries are.

there are loads of crab apples planting all over the place which kinda annoys me, because they are mostly inedible. last winter i learned that they are edible after a few frosts when they get softer and the sweetness comes out of them. this made me feel a little better about crab apples.

It could be fun to do some city foraging rides. The serviceberry harvest would have to be pretty last-minute though [edit: next June]. Once those things ripen, you do have to race the birds for them, as Caitlin points out.

Mulberries, too, again late June. There’s a mulberry along the Jail Trail, IIRC. Best done by leaving a sheet on the ground and letting them drop.

There was a foraging ride at this year’s BikeFest. Dude named Nathan ran it. Among other things, I learned that you can make pink lemonade from sumac, and you may have noticed there’s TONS of sumac along the south side trail and all over (a bit past the season now, their berries have probably lost flavour). So I’ve made a bunch, it’s one of my new favourite things. Also, Elderberries on the south side!