They consider bicycle helmets to be ‘hard sided items’…

I am glad to hear that they have clarified the policy. It seems, though, that they have a warped sense of what would constitute a security hazard. In their defense, they are likely following the lead of the Transportation Security Administration’s lead of “security theater”, i.e., make it look like they are increasing security by doing certain things when in fact those things have little to no (or negative) effect on increasing true security.

So, yeah, OK, we clarified the policy. Now, can we talk?

Does anyone want to go to the pirates game on august 8 vs the colorado rockies?

did the blind girl from the lionel ritchie video sculpt that? 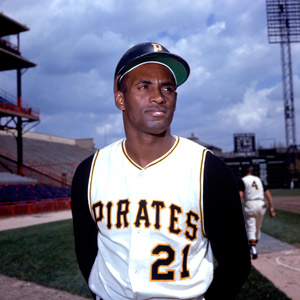 resemblance, maybe. accuracy and anything even slightly flattering, not so much.

Is it a bronze-coated bobblehead?

Actually, a bike helmet may come in handy those days to protect your head when the give aways get thrown.

Look at what they’re doing on the other side of the state.

I thought you were kidding about the bronze busts. You’re not.

Never mind throwing the damn things, I want my helmet on just in case someone drops one from the seat above (falls off lap, whatever).

Just exactly what is their reasoning on the bike helmets, again?

Batting helmets and bronze busts are NOT “hard-sided objects”???

i wonder if they’d let this bike helmet in:

I think that bust is actually Doc Ellis, self portrait. that or doc sculpted it while “enhancing” his performance.

In the meantime we suggest that people who ride to the games use the racks around the periphery of the stadium and use a U-lock to secure helmets with the bike.

My solution is much simpler. Don’t go.

I never had a problem going in with a helmet before, but if they “clarify” their policy to force me to leave it behind, then I guess I’m not going to bother buying tickets only to be turned away.

Not that it’s such a great sacrifice — I’d rather be biking than sitting on my butt watching someone else have all the fun anyway.

i’m sure the opposing teams enjoy the batting practice

Ow, I’m not even a fan and that hurt.

I think I’ll just avoid the headache and continue my long-standing policy of not attending. They don’t need nor deserve my money.

@joeframbach They don’t need nor deserve my money.

True enough, but how is refraining from attending going to prevent those billionaire owners from shaking down your elected officials to pay for an unneeded stadium?

Dan and I were talking about a Flock to Pirates ride….

Nick, you can buy group tickets and your names up on the score board. Could be a “flocky” way to get PNC Parks attention.

For those who are excited about the Pirates in the playoffs and would like to bike to the game, helmets are now allowed!

Wow! That’s a great update! Thanks for sharing!

Haha, tell them to correct the other two references in the policies that still says they’re not.

Yes, it is. The first time I took my helmet inside the park, earlier this year, the gate attendant scrutinized it for a bit and decided that it “looks like a motorcycle helmet, but it has holes… so it’s OK to come inside”.

Additionally, I requested the PNC Park add more bike racks, they (Mr Coonelly) got back to me within hours with this:
“Thanks Colleen. We installed additional racks last year on the Maz Way circle. Looks like we may need to add even more. Let me see if we can come up with an appropriate solution.”

Oh, my, that makes me tear up. Beautiful.

They’re on the ball

send him back info on bike corrals!

I’ve locked my helmet by the straps to my bike hundreds of times without incident.

I don’t even lock my helmet to my bike. Although it is not a particularly special helmet. I just connect it to the frame near the lock and have been doing so for over a year without incident.

Benzo wrote:I’ve locked my helmet by the straps to my bike hundreds of times without incident.

I no longer take the helmet in with me. It’s a big pain to lug that thing around a packed stadium. I’ve started leaving my helmet locked with a cable through one of the holes or straps in the front basket. I think the worst thing that will happen to it is it’ll get rained on.

For the rest of this season, you won’t need to be sitting.

Benzo wrote:I’ve locked my helmet by the straps to my bike hundreds of times without incident.

Isn’t the big problem with helmets that they’re single-impact? So if someone bumped into your helmet with force or dropped something on it, you could pick it up and never know it had been damaged until the day you need it, when you find out the foam was cracked and the helmet’s safety compromised.

Yes. Theoretically this could happen. So could someone peeing in it, or putting a bomb in it, or filling it with hamsters, or hitting it with a sledge hammer.

Have any of these happened to you, or anyone you know in pittsburgh?

A helmet being filled with hamsters would be the cutest thing to happen to my helmet. I hope this happens to me.