Police using junction hollow as a cut through just because

Went through there (the Panther Hollow end) at about ~3pm today. The gate was closed, but no zip tie. I didn’t notice if that (battered) traffic cone was still around (I would stick it in the middle whenever I closed the gate).

– It’s perfectly reasonable for workers on a truck to turn around and take a legal way to the other side. Their compensation does not depend (fortunately) on randomly destroying public property.

– the destruction at the 4-mile end seemed pretty deliberate, like it took a vehicle that the owner felt could be used to ram into a strong metal gate and mangle it. This seems to narrow the possibilities.

– But I would assume that the ongoing problem is private car owners.

– I was at the Home Depot maybe a week or two ago. The 18″ ties (?) are not that cheap but they do seem to be a good way to secure a gate. But I also noticed that they carried metal ties. I wonder if these might be more difficult to undo, by a casual motorist.

On a positive note, I chanced by a fellow (not a cop) rolling his motor scooter onto the JH trail from the Oakland side and asked if anything was wrong. He replied that all was fine, he just wasn’t going to ride the scooter on the trail…

Just had a city…municipal..truck with flashing lights flying up tiwards me along the Junction Hollow Trail from Greenfield. They (1 passenger) swerved onto the dirt to avoid me…too quick to get a pic…I turned around to see if thet had any business, but no…they were gone…maybe coming from lunch…going to lunch…or for drinks at a local bar…

Maybe with complaints they are using the lights to imply mportant business???

Has anyone seen any private vehicles on the trail lately? I haven’t seen any for quite a while now.

I got to observe a natural experiment.

On Sun (~1pm), Mon (~6pm) and Tue (~4:30pm) I noticed that the north gate got ziplocked (not sure how those things happen, but hey). The Sun zip was gone Mon, and the Mon zip was gone by ~2pm Tue. If anyone happens to go by today and sees the gate open (or not), do post your transit time. Just to contribute another datapoint.

Didn’t see any cars. Though I saw that there is a growing pile of snipped zips littered about.

I want to personally thank the person that zips the lock. F them.

I like Ahlir’s idea about collecting data on this. So much so, I made a google form to collect it after I saw that the gate was closed, but had broken zipties on it this morning.

If nothing else, if it is discovered who is removing the zip ties they can be cited for littering.

Seems it wouldn’t be difficult to pause for 15 seconds to pick up the cut ties and other small litter right there, and toss it in the next trash can you pass. I almost always have a small bag tucked away somewhere for that reason.

Perhaps we should all make a habit of reporting gate state whenever we ride through. And then if we find the gate open, also closing it.

Soon this will pinpoint the time periods that have highest likelihood of a vehicle being on the trail. At that point it would make sense to show up with a camera and collect the evidence that the police and city apparently feel they need to actually do something about this problem. (And at $500 + costs, how can they lose?)

I’ve previously offered to show up with a camera. And I’m still happy to do it. But it would make the most sense to do so when the odds of catching a perpetrator are the highest.

I would suspect that the city police & DPW vehicles would correlate to change of shift times which are not necessarily peak rush hour. I know I experience more driving-too-fast city cop cars just before 2pm & 7pm in the south hills & they are almost always headed in the direction of the zone police station.

Anyone know the normal shift times for the city garage at the end of the EFT?

Interesting vehicle observations:
There was a rail truck (pickup truck with special wheels on the rails) at the Panther Hollow Lake level crossing, stopped, with driver asleep at the wheel; did nothing when someone crossed the tracks.
There was a pickup truck (public works?) driving north on the trail, toward the closed gate. The pickup truck turned around and drove south – did they see that the gate was “locked” closed and give up, or did they turn around for other reasons?

Should we continue to report this way, or should we agree to all use the mattjackets google form?

This thread provides running updates.
The google form is archival, with all the info in one place where it can be perused for patterns (hopefully).

Yep, I’m hoping the structured data from the form will let us figure out some patterns when the gates are opened & see who’s doing it like Ahlir said. The form results are presented in a less-than-useful way right now, but the raw data will be made available to anyone who asks.

I’m down to show up with a camera as well :) I’m wondering though, if the increased use of the park (eg. little kids soccer) and the extended daylight won’t keep at least some of the private vehicles off the trail who were “brave” enough to use it under the cover of winter darkness.

4/8 4:15pm ziptied closed & some pink wire thingy where the lock should be.

Lets face it, most cyclists rock! Thanks for the pink wire thingy.

8:35pm gate open, zip ties and whatnot cut and on ground. Closed gate.

4/12 10am gate open, city pickup truck entering trail. The gate was open prior to their arrival….they just drove straight in.

Then encountered Municipal truck with trailor…3 or 4 guys in truck. One got out snd opened the fate. I snapped photos..to be uploaded later. One fellow got out and protested and threatened me if i take a pic of him without his permission…i suggested he call the police. He added he was doing trail work..me: then you have nothing to fear. They left the gate open and so did i. I hadnt noticed them on my ride up from JH parking lot-[though there was a police vehicle there for s bit that left towards Greenfield.]

The pic i have that includes the fellow opening the gste is not the fellow i interacted with..

When you say municipal truck, I presume you mean it wasn’t City of Pittsburgh, just had municipal plates?

Pgh is the Municipality

4/12 6:55pm gate closed, pink thingy set in place but not wired in as it was on 4/10, previously-cut ziptie just hanging there, 2nd ziptie is secure

As it happens, I was climbing Junction Hollow and passed the upper-end gate which was zip-tied closed at 3.30 pm Tuesday 4.12.

I came back down and passed the upper-end gate which was now open at 3.50. I encountered a CMU Police vehicle (which was behaving very professionally – slow & safe) We exchanged waves.

I met Iguana as he followed the CMU police vehicle uphill. He said they came down, stopped, did a 180 and climbed out.

I think it’s great that Police are patrolling the trail.
I also think that a closed gate is a safety device.
It’s ok with me if they open the gate,
but they should secure it with a Zip-tie when they leave.

to restate: during normal patrol (not responding to emergency),
if they undo the gate, they should re-secure it on the way out.

I am not happy that they’re driving on it still. If they want to patrol, there are CMU bike cops. Again, that trial isn’t made for multi ton vehicles to drive up and down it on a daily basis. I don’t need pinch flats from crap trail conditions.

I wonder what would happen if someone parked their car on the trail at the Greenfield end–to do trail maintenance…we waited for someone to come from the Oakland side…then padlocked that end….It might cost a ticket, but someone gets caught with their hand in the cookie jar. 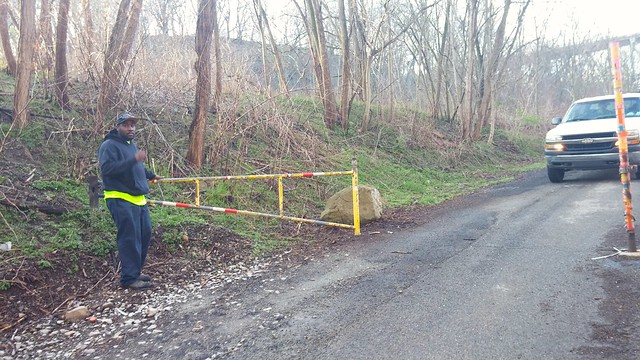 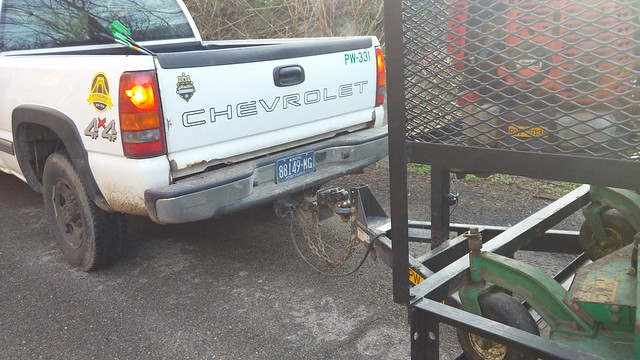 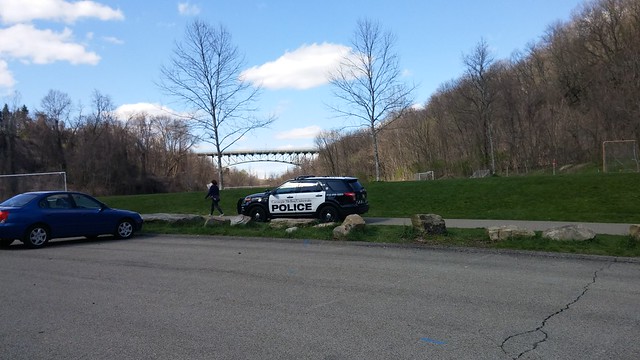 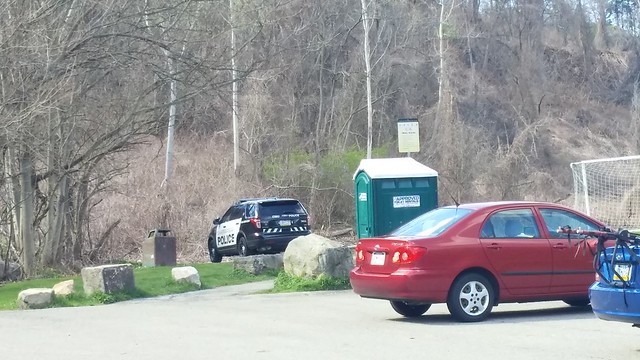