On my morning bicycle commute, I noticed that the Ron Paul campaign had erected four large campaign signs on the Hot Metal Bridge above Second Avenue. 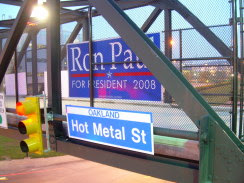 According to Ron Paul’s own WPA Meetup Group website “Title IV, Article I, Ã‚Â§423.03 restricts any sign from being placed on a utility pole or other public property near public right of ways. Essentially, almost all public property on which you would want to place a campaign sign is off limits according to the Code.”

As a cyclist, I am offended by the use of “our” bridge for political ends. While I am a firm proponent of free speech, I believe this signage, placed under cover of darkness, violates the afore mentioned city ordinance and the Ron Paul campaign should be suitably fined. Especially when their own website advises against the placement of such signs.

I have sent a message to the Mayor’s office to that effect.